By JOEL KIM BOOSTER • 2 years ago

I didn’t attempt Austen until high school. I had identified as a reader from a young age, back when reading any book could make you seem intelligent and worthy of attention (the only currency I understood as an adolescent). But upon arrival in young adulthood, it’s no longer intrinsically impressive to simply be able to read, and stepping up your game involves performative attempts at The Bell Jar or Sense and Sensibility in public spaces.

At 16, Jane Austen didn’t really stick out as someone who was particularly for me. I was freshly out of the closet, estranged from my family, and giving toothy blowjobs to Cold Stone Creamery employees in the back of Pontiac Sunfires. Nothing about the struggles of Jane Bennet and Elinor Dashwood particularly resonated with me at that moment in my life. But about a decade later, I’d pluck a copy of Pride and Prejudice off my shelf (purchased to display in my Brooklyn apartment to convince Grindr hook-ups that I could fuck and think), stick it in a tote, and head off for the first time to Fire Island.

For those of you not in the know, Fire Island is widely known throughout the gay community as one of two things: a Mecca-like summer destination full of gorgeous architecture and bronzed hard bodies, or a nightmarish summer stock production of all our worst impulses as modern gay men: racism, substance abuse, and depraved sexual activity. Both versions are more or less correct depending on your perspective, but ultimately it is what you make it.

It was here, reading Pride and Prejudice for the first time on an island without cars, seemingly run entirely by surly Long Island teenagers, that I began to understand the heart of Jane Austen. She couldn’t have known it at the time, but while writing about five middle-class sisters during the Regency period, she was also writing about my experience as a gay man in the 21st century.

Making my way through Pride and Prejudice on Fire Island felt especially apt at the time: there are few places where the economic divides within the gay community are so plainly seen. Six-figured executive daddies and Ivy-League, startup proto-bros rubbing elbows and other body parts in hot tubs directly next door to my house, where 16 20-something gay freelancers, without salaries or inheritances, shared four bedrooms. I felt lucky to be there, but it wasn’t hard to put myself in the shoes of Elizabeth Bennet, sharing a modest estate with her parents and four sisters—the farce of being “poor” in 19th-century England. Though we weren’t the only queer boys straddling the (incredibly skewed) Brooklyn poverty line, trying to live out a lavish vacation-fantasy on the cheap, I think part of me loved the oddity of our setup and the misplaced sense of moral superiority it brought me.

All week, I couldn’t help but map Lizzy’s experiences navigating the limiting social conventions of her time onto the similarly tortured social conventions of gay male spaces. Instead of a dance at Netherfield, it was a pool party on Ocean Walk. Instead of a turn about the room with Caroline Bingley, it was a trip to the backroom at the underwear party with some muscle bottom named Todd. In every case: a group of adults circling each other, saying little but communicating volumes with glances and body movement and hidden meaning.

Austen may not have realized it at the time, but her novels are covered in wall-to-wall shade, the modern homosexual’s secret language that involves stealthily insulting each other with enough plausible deniability to keep the party going. Miss Caroline Bingley had nothing on Todd, who could gut you with a smile and an innocent question: “Cute bathing suit, did you get it from Amazon?” Truly savage.

And there I’d be, taking it all in, observing and wryly commenting to Bowen (the gay Chinese Jane to my gay Korean Lizzy) about all the ways we were somehow above all this, just as everyone else considered us below it.

As much as Austen appealed to the innate cynicism I’d developed as a defense mechanism after years and years of sexual rejection, she somehow managed to unearth the big, hackneyed romantic that I’d buried deep underneath layer upon layer of self-deprecating humor and low self-esteem. Being in an environment surrounded by beautiful gay men, it was hard not to yearn for a Darcy of my own. Someone I’d spar with initially, who would then go on to be obsessively in love with me by week’s end. I didn’t exactly find that, but I did find Dan.

We met on the last water taxi the night of the underwear party. He approached me confidently, with a broad smile. I was cold at first. He was so handsome—too handsome—and the whole thing felt like a prank. He spoke excitedly about his first time at the party, how much fun it had been. It was 4 a.m., and he was a ball of chemically enhanced exuberant energy. As we exited the water taxi 15 minutes later, I found myself holding his hand. Instead of going home, we walked to the beach and dry humped as the sun came up. It was the most insanely romantic thing that had ever happened to me by that point in my life. We exchanged numbers and I walked home smiling, sand spilling out of crevices in my body for days to come.

I really thought I had done it. Despite all the eye rolls and private judgements I’d made about the men around me, I thought maybe I had landed myself a Darcy. Someone who could look past my apparent lack of (sexual) status in comparison to his. He was hot and white and (later, after sufficient social media stalking, I would learn) rich. I was soft-bodied and Asian, two things that within the gay community divided Dan and I as much as Elizabeth Bennet’s lack of a title and land separated her from Mr. Darcy. Within hours of our meeting, I already began to spin wild fantasies of Dan confidently kissing me by the dock, daring someone to challenge—what was in my mind at the time—a radical relationship.

Or maybe he was just an asshole.

Since that first trip to Fire Island, my self-esteem has been severely rehabbed. I no longer consider myself less than or undervalue myself sexually. This comes in part because of work I’ve done on myself both physically and emotionally, but I attribute part of this emotional education to Jane.

In the years following this first adventure, I would bring Austen with me to a new Fire Island house, then to Palm Springs, and recently an Atlantis cruise—basically any place where I’d be surrounded by gay men. No one understands gay social mores like Austen, and no one is quite as funny or exacting while sketching them. I delighted in finding common gay archetypes in her writing. There’s Fanny Price, the quietly resentful gay guy blogging about respectability politics and tweeting nasty asides about Instagays. Elinor Dashwood, the rave mom who makes sure everyone is timing out their G doses while pining for his best friend. Emma Woodhouse, your impossibly hot, well-meaning friend who comes from rich parents and is so untouched by actual trauma that he can’t help but create drama wherever he goes. Catherine Morland, the simplest twink in your social circle, who is eternally 22 and constantly getting scammed. Anne Elliot, your friend who has been obsessively checking their ex’s Instagram story for seven years. Lady Susan, your friend Tyler who no one really seems to like, and you’re not sure why.

But what all these heroines have in common, a journey that every gay man at every level of our deeply toxic, imaginary caste system can relate to, is seeing all the ridiculous rules that were created for you, that you’ve somehow internalized, and finally recognizing them as false. Austen detractors—sad, literary meatheads—have often complained loudly about a lack of real “conflict” in her stories. And bless them, but maybe what they’re not connecting to is that struggle. The long, arduous path that each of Austen’s heroes go through to not only hold on to the love they’ve found, but to believe themselves worthy of it.

So I keep going back. To Hartfield, to Longbourne, to Barton cottage. I keep going back so I can remind myself, through humor that has survived hundreds of years, how impossible it is to seek value in yourself when you’re using someone else’s scorecard.

This is Part 3 of our Love, Stories series. Read the others here! 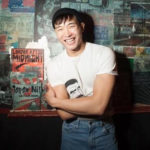 JOEL KIM BOOSTER is a Chicago-bred comedian and writer currently based in Los Angeles. He has written for Billy On the Street, Big Mouth, and Comedy Central’s upcoming The Other Two. His Comedy Central half-hour special is available to stream as is his debut comedy album, Model Minority. You can follow him on social media @Ihatejoelkim.