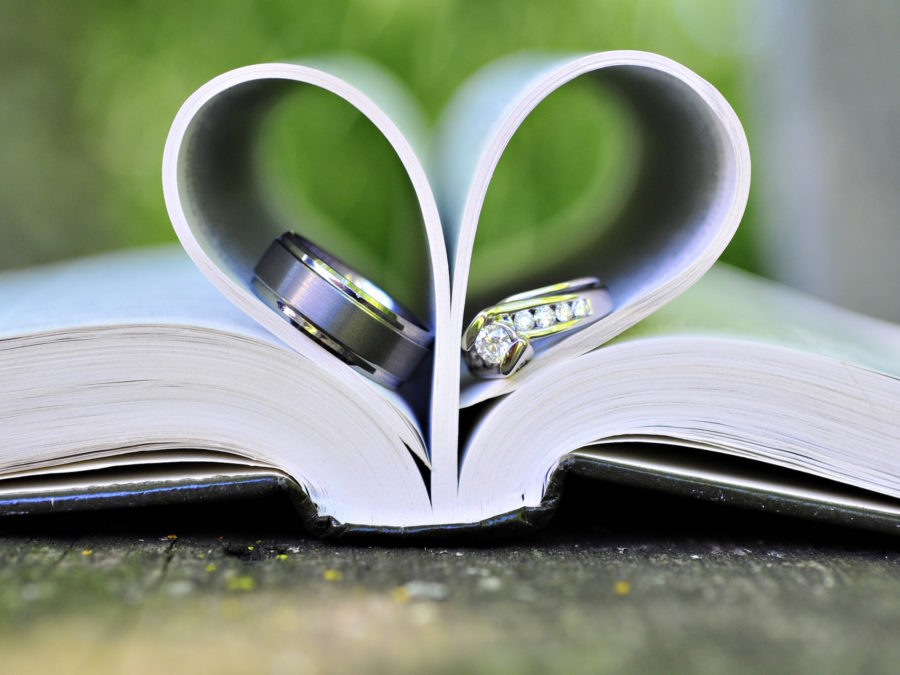 The night before Matt proposed, I was sniffling into his neck about how scared I was that I wasn’t “marriage material.” I had just finished reading Sarah Forbes’ professional and personal memoir Sex in the Museum, and the part about how potential dates and mates recoiled from her work as curator of New York City’s Museum of Sex hit me hard. These men projected nymphomania and lack of self-respect on Forbes despite her interest in sex being purely sociological; in contrast, I had spent my single life in the city immersed in the kinds of adventures her museum profiled in its exhibits. If she were worried about being judged worthy of the institution of marriage, my chances were even worse.

In that self-pitying emotional state, I was completely surprised when the next night, on May the 4th (a.k.a. Star Wars Day), Matt proposed with a ring inside of a handmade, personalized lightsaber. Not completely blindsided, as we had started talking about marriage about a year into our relationship, and had picked out the ring together around the New Year. But this book, with its ruminations on female independence and sexual open-mindedness in contrast to traditional expectations about wives and mothers, had made me second-guess everything.

Last summer, I curated a bookshelf for RIF called Books to Get You Through Wedding Season—a mix of fiction and nonfiction aimed at Millennials giving up their every weekend to weddings, bridesmaids trying to survive this highest of girlfriend honors, and brides watching everything go up in flames. As someone who would eagerly watch Say Yes to the Dress and read Offbeat Bride whether I was in a relationship or not, my interest in the wedding-industrial complex still came with a level of detachment. The criteria with which I recommended chick lit like Marian Keyes’ Lucy Sullivan is Getting Married to Eimear Lynch’s essay collection The Bridesmaids were more in line with my countless rewatches of My Best Friend’s Wedding than with any firsthand personal experience. I hadn’t even attained that clichéd “always a bridesmaid, never the bride” status: By the age of 26 in mid-2015, I had never served as a bridesmaid, though I had solemnly thrown flowers at my godmother’s wedding in the 1990s and cried my way through a reading of a poignant sci-fi love poem at my friends’ nuptials the year before.

I’m not being dramatic when I say how suddenly these books shifted from theoretical pieces of entertainment to actual, concrete guides, once I got engaged. Jennifer Close’s Girls in White Dresses—a collection of stories about Millennial cogs stuck in the wedding-industrial complex—gave me clear don’ts to avoid bridezilla status. Ophira Eisenberg’s delightfully prickly memoir Screw Everyone: Sleeping My Way to Monogamy became a lifeline, reassurance that anyone could get married, whatever that means for that person.

The day after we got engaged, I picked up a copy of graphic memoirist Lucy Knisley’s Something New: Tales from a Makeshift Bride, which had been published just days before. While her proposal didn’t resemble mine in the slightest—reconnecting with the one who got away—I found myself tearing through her hopeful, detailed, at times irreverent and self-deprecating memoir-slash-instruction-manual. Other brides-to-be cart around thick bridal magazines; this brightly illustrated graphic memoir lives in my tote bag instead. In addition, I’ve been revisiting that metaphorical shelf, taking inspiration from—or completely rejecting—these romance novels and chick-lit conundrums that all kick off with, culminate in, or critique the literary trope of the marriage plot.

One book I never imagined resonating with me during my engagement has been Rumaan Alam’s Rich and Pretty. This one I picked up just as a summer beach read but was surprised by its profound observations about early-adulthood friendship and marriage. Yes, socialite Sarah’s wedding kicks off the plot. I just didn’t expect it to be the all-consuming event that throws into sharp relief how different her and Lauren’s lifestyles and values have become since they first befriended one another at the age of twelve.

When I first read the jacket copy, I assumed that I would level with Lauren: working in publishing, her ambition smothered by complacency, emotionally distant in relationships. But instead, I saw myself in Sarah, struggling against a wedding that is slowly being shaped through the eyes of everyone but her, in which she feels like she lacks any agency. When Sarah discovers that she’s pregnant three or four months before the big day, she bemoans the order of events to Lauren: “I’m not mad about the wedding, it’s just… Why do anything if you’re not going to do it the right way? I was trying to do it the right way.”

As we began talking concrete details during the start of the planning process (which will span about 16 months), Matt sat me down for a serious talk: He wanted to make sure that we communicated clearly during the next year-plus so that I didn’t wind up creating impossible expectations that would only let me down. He knows me well, my tendency to want things to go a certain way, and my crushing disappointment when they didn’t.

Even with those caveats, I stumbled in the first few months as some of what I assumed were the easiest details gave way to rude awakenings: Matt’s large Italian clan precluded inviting people I really liked despite them being more acquaintances than close friends; making peace with the realization that my grandparents couldn’t physically make the trip from Germany; feeling rushed to choose a venue and nail down a date when I had envisioned getting to leisurely tour several places like a romantic-comedy montage. I was crying into a tiki drink at a too-loud neighborhood bar one night over something blown completely out of proportion when I remembered Sarah and her despair over doing things the right way—and suddenly, everything snapped back into perspective.

Like recent college grad Madeleine in Jeffrey Eugenides’ The Marriage Plot, at about the same age I was fascinated with the marriage plot as a literary trope but less so in how it related to my real life. I vividly remember confiding in my mom at 23 that after almost five years with my college boyfriend, the only next step seemed to be marriage… except that something about that option, bound to my life partner before I had even hit my quarter-life crisis, filled me with dread. But if I shied away from societally-sanctioned marriage, the “obvious” choice after so many years spent with someone I loved, what was my other option? To break up? Ironically, that is what wound up happening, but not because I delivered him with some ring-related ultimatum. We simply grew apart, and he got up the nerve to put us both out of our misery.

When my ex and I were still having issues—the marriage reluctance and otherwise—my sister made what I considered at the time a cutting comment about how “I don’t want you to settle down at 20 and not live the rest of your life.” It hurt then, but now I can easily envision her in the role of Fliss from Sophie Kinsella’s Wedding Night, racing across the globe to stop her sister from marrying the wrong guy. And she would’ve been right!

Last year, on our first big vacation together to England and Iceland, I confessed to Matt that I was jealous of our friends who were getting engaged—it was something I wanted for myself, though at the time I think it was more due to feeling stagnant in my professional life and wanting something exciting to define my life for the next year or two.

At 23, I felt pressured by society to become a wife. At 26, I wanted it but felt guilty for playing into the marriage plot, for giving it so much weight over other aspects of my life. In Rich and Pretty, on Sarah’s wedding day—held at her parents’ lavish home because it was the obvious choice, even if it wasn’t Sarah’s first—Lauren observes how “Sarah hates doing what is expected of her, even though that’s just what she ends up doing most of the time.” I didn’t want to be written off as getting engaged because I had nothing else going on.

This ambivalence was something that I couldn’t articulate until I read Rebecca Traister’s All the Single Ladies: Unmarried Women and the Rise of an Independent Nation, which charts the rise in the national marriage rate from 20-22 to 27—due to women taking the necessary time to live alone, independently, with emotional support and intimacy coming from a group of friends, instead of jumping into a marriage just because it promises to provide that same stability.

“I want to marry you,” I told Matt on that plane, “but I know that if we got engaged right now, it would be for the wrong reason.” Seven months later, he proposed. It wasn’t long after that conversation, but a lot happened in that time: We moved in together, joining our routines and habits and lives, and spent a lot of time in each other’s hometowns. We learned more about what the other was up to in the years before we met, and got a sense of the adults we each grew into before we were ready to start this next phase of our lives together.

When I was reading Something New for the first time, I glossed over a lot of the DIY aspects of Knisley’s wedding, assuming that Matt’s and my celebration would match the vineyard and barn-set nuptials we’d attended in the past. But instead—in part due to wanting to include so many people, and our shared desire to have an indoor wedding that wasn’t in a church—we chose a venue that is the definition of DIY. That will make it more of a headache than paying for everything in one package, but it will also mean that we get to bring our own personal touches to the centerpieces, the favors, and the decorations. I doubt I’ll be hand-sewing ties like Knisley did, but her advice and photos will be invaluable.

Planning a wedding feels like learning the steps to a dance that millions of other people already know. It’s very similar to the two years in which I was basically an expert on online dating, having my fair share of personal experience (having met Matt on OkCupid) backed by books like OkCupid co-founder Christian Rudder’s Dataclysm. I still get to dispense that brand of wisdom with single friends navigating that thorny online sphere. In turn, my friends who had me read a love poem about time travel and zombies at their wedding—who will be in our wedding party—have said that it feels so weird to take in so much knowledge for a year or two of planning and then have no outlet for it. They’re sharing their insights and lessons with us, as I imagine I’ll do with my other friends once they start getting hitched… complete with my collection of dog-eared books.