Every Page We Read This Year Was a Victory

In 2017, amid constant push notifications and fake news, the books we read were an act of self-care. 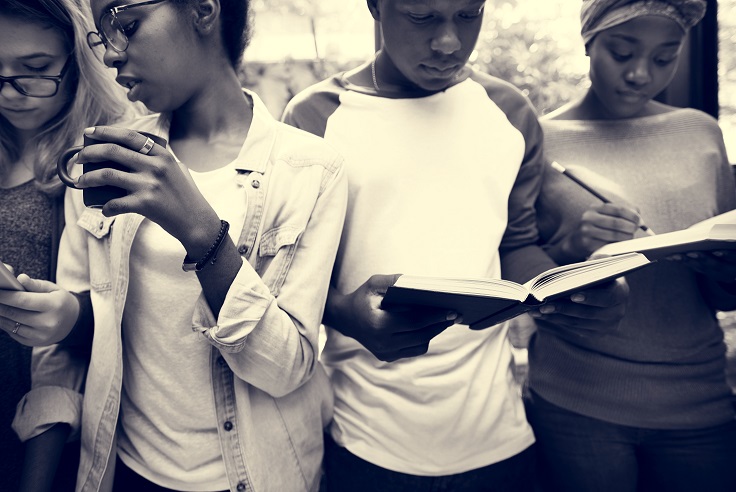 This year has been at attack on so much: on our energy, on freedom, on facts. It has challenged our capacity to experience joy, to maintain focus, to turn it all off. “It” here could mean anything you choose; fill in the blank with one of the countless forces that have bombarded us with anxiety and anger in 2017.

And that’s just the national news; it doesn’t even count the trials of our personal lives. For me, they included an unwanted move, an unexpected breakup, and an unrelenting pain in my back.

So what did we do? What could we do?

“Women Who Run With the Wolves has helped me see myself and empower myself from a mental, emotional, and spiritual standpoint when everything going on around me wants to break down,” wrote my friend Carmen, referencing the collection of female-centered folklore and fairytales from around the world. “Sometimes the greatest form of resistance is your self-care.”

Every book we read this year meant more than we realize. Every paragraph we consumed was a Facebook rant we didn’t. Every page we turned was a swipe or scroll skipped. Every word we read was a triumph, a tiny yet significant victory for strength or happiness or imagination or truth.

For me, Every Species of Hope, Michael J. Rosen’s poetic meditation on art and flora and fauna in the woods of rural Ohio, was an escape, a portal into a quieter, stiller world where I could reflect, admire, and appreciate. Every georgic and haiku was a moment for humility and awe, for reverence to the beauty of the natural world, for things larger and more powerful than any person or president.

Paul Beatty’s The Sellout was a timely, striking insight into the black experience in America, offered with a flavorful, biting dose of satire and wit. Rad American Women A–Z, an illustrated anthology of our country’s female change-makers, served double duty: a gift for my four-year-old niece and fodder for a read-aloud with my 94-year-old grandfather. Even Basketball and Other Things, a part-analytical, part-fantastical take on all things NBA, did its part for me (a chuckle, a distraction) and for others; the book’s success elevated the platform of its author, Shea Serrano, whose Twitter campaign raised over $100,000 for those affected by Hurricane Harvey.

That chronic pain I mentioned has made reading a sometimes-insurmountable challenge over the past two years. In August—after endless, unsuccessful attempts with acupuncture and physical therapy and injections and massage and more—a friend recommended Healing Back Pain: The Mind-Body Connection, a tiny text from 1991 by Dr. John Sarno. At first I side-eyed the dinky paperback that reeked of quackery, but my desperation ultimately outweighed my skepticism—reading it can’t hurt…not nearly as much as my back does—so my scoff turned to a sigh, a surrender. I dove in.

The book suggests that my pain—and the pain of millions with discomfort in the neck, back, shoulders, and buttocks—is a result of repressed anger and anxiety. My subconscious, Sarno says, decides that experiencing those feelings is unacceptable, so it distracts from psychological and emotional pain by way of physical pain.

The theory is that by acknowledging the source of the pain as psychological, not physical—and by resuming all normal physical activity—the symptoms will subside. The book (and a new documentary on it) will answer all the questions you inevitably have, but in the meantime, allow me to fast forward: I read Healing Back Pain, and almost instantly—magically—began to find relief. Six weeks later, my pain had subsided by ninety-five percent.

Of course, not every book we read was life- or world-changing. And sure, I didn’t read as much as I would have liked to; do any of us ever? There is always more we can read, more we can do. Yes, we can push ourselves to be better, but we can also practice forgiveness, especially under the circumstances of this year. Sometimes “good enough” is indeed enough.

When we read—no matter what we read, or how much—we dug deep within ourselves and excavated precious, threatened resources: Energy. Focus. Time.

Amid everything being thrust upon us by the merciless gods of the algorithm and the push notification and the all-staff email, every page we read was a choice. Our choice. It was deliberate. In rejecting so much—distraction, bad news, fake news—we cultivated empathy, knowledge, love, and power.

Whether a brief escape, a training manual, a survival kit, or an act of revolution, the books we read are a testament to our ability to overcome. When we read, we fortified ourselves in a space of rest and regeneration. We emerged stronger, smarter, clearer—more whole. We emerged ready. And in 2018, mark my words—and the words we read: we will be ready.