The Complicated Relationship Between Women and Art

Lorraine Berry takes a look at Little Dancer Aged Fourteen and examines the complex history of women in art. 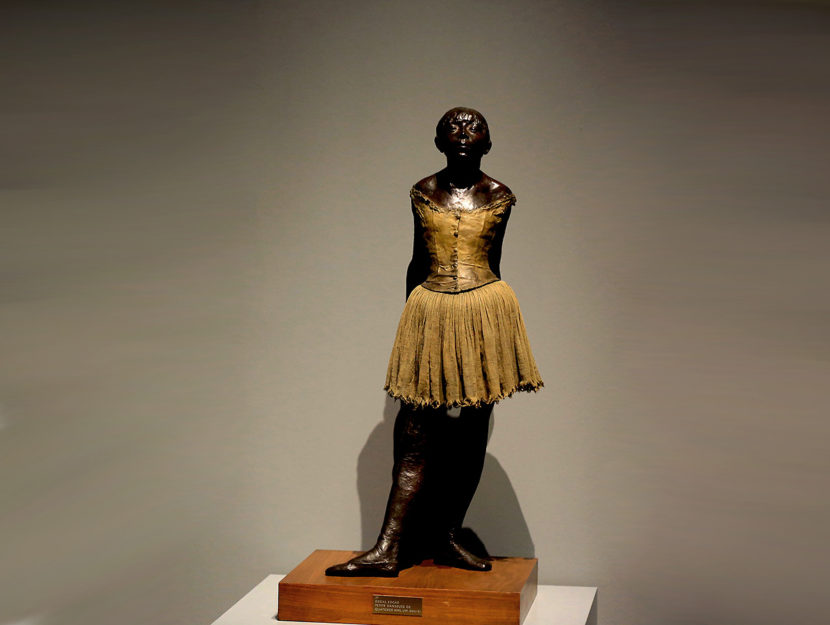 How many times have you read a book or watched a film in which part of the plot explored the erotic attraction between a male artist and his female model? In how many of these narrations did the two end up in bed, as the start of a torrid affair by which the artist’s model became his muse, his lover, his wife, or a complication? The idea that a man is unable to resist the urge to make love to a woman when he paints her, especially if she’s nude, perhaps even telling her that “when my brush moves across the canvas, it is like I am touching your skin,” is all too common.

Who was this tiny dancer? Her name was Marie Genevieve Van Goethem, and she, along with dozens of other girls and young women, toiled long hours in training every day at the Paris Opera House. Each week, for ten to twelve hours per six or seven days, they put their malnourished bodies through rigorous physical training, forcing their limbs into stressful positions that stretched sinew and joints beyond the point where they might tear, and pounded their bones with such force that various forms of fracture were common. Each day, girls as young as six years old fulfilled the requirements of the contracts that their parents—most often, their mothers—signed on their behalf.

Parents were eager for their young daughters to acquire a contract with the Opera Ballet. While the child dancers earned a pittance per day, it was still more than the girls might have made in factory work. Thus, children this young were responsible for helping to support their families—sometimes the sole support—which accounted for the poor nutrition. In 1881 and 1882, France passed laws that established free and (later) compulsory education for all children between the ages of six and thirteen, but by law, the Opera was exempt from providing an education to the girls. Thus, most of them remained illiterate. The people who ran the Opera’s programs were not interested in the thoughts of these girls, only in what their bodies’ capabilities were. The girls were referred to as “little rats,” an indication of the low regard in which these children were held.

Principal ballerinas, on the other hand, were the rock star celebrities of their day. The fame and glory showered on these top dancers made them both the toast of Paris and constant fodder for the gossip columns in the press. Stories of flamboyant off-stage behavior, their famous lovers, and their outrageous parties where champagne and absinthe flowed gave the public plenty to talk about. Parents pushed their daughters to achieve in the ballet program so that they, too, could reap the financial rewards.

But for every woman who achieved top dancing positions, hundreds of other girls fell by the wayside. These girls, already denigrated as “rats,” often found that they could supplement their small income as background dancers by accepting the attention of the many hangers-on who offered money for the opportunity to sleep with them. Marie had two sisters who were also “rats.” One of her sisters surmounted all of the barriers to become a celebrated ballerina, but her other sister became a prostitute when she failed to move on in the program.

Laurens set out to discover just who Marie had been, and her efforts to track down information about her create elements of a detective story. The person about whom much had already been written was, of course, Edgar Degas. And in uncovering what motivated Degas to create the sculpture, and how the sculpture was received by the public, much is revealed about society during La Belle Époque (1871-1914).

When the sculpture was first shown in 1871, it was greeted with revulsion by most of its viewers, who, as Laurens documents, were almost exclusively upper class and bourgeois men. For the audience, the mythology of the ballet dancer was that she was a nymph who pirouetted and leapt without effort, without breaking a sweat, as she combined music and movement. But the ballet dancer presented by Degas was heavily muscled, with no breasts or hips. For the art connoisseur, his position in life gave him “rights to the beautiful,” to the expectation that artwork would reflect beauty, not this child whose face was compared to that of a monkey.

Degas disagreed. “What matters to me is to express nature in all its aspects, movement in its exact truth, to accentuate bone and muscle, and the compact firmness of the flesh,” he said in 1897. His portrayal of Marie, which accentuated her physique and exposed the effort that went into being a ballerina, offended those whose view of ballet did not incorporate the tiny bodies of the background dancers and those in training.

But did Degas make his sculpture to inspire a change in the treatment of the little dancers? Did he feel affection for Marie, who he continued to use as a model for other works? Was he protective of the women who danced, and who he made the focus of so much of his work? The answers to these questions are complex and came as a total surprise to me. What Laurens reveals about Edgar Degas has forever changed the way that I will look at his work in the future.

In the last pages of her book, Laurens again returns to Marie, still in search of answers to the most basic of questions about what happened to her after Degas no longer had a need for her. The information she uncovers is unsettling. For Laurens, however, her attempts to “know” Marie trigger some essential questions about the relationship between author and subject, and how a writer can strip a subject of their true identity or soften the edges of a disturbing history in an attempt to redeem her subject. It is this desire, to see in the Little Dancer a child that we can save by knowing more about her, that should provoke readers to think about what it is that we expect of literary art. Buy The Book
CAMILLE LAURENS is the author of six previous novels and two works of nonfiction. In His Arms, winner of the Prix Femina, was a number one bestseller in France and is Laurens’s first book to be translated into English. A librarian, she lives in France.