Booksellers of Baghdad by Philip Patrick 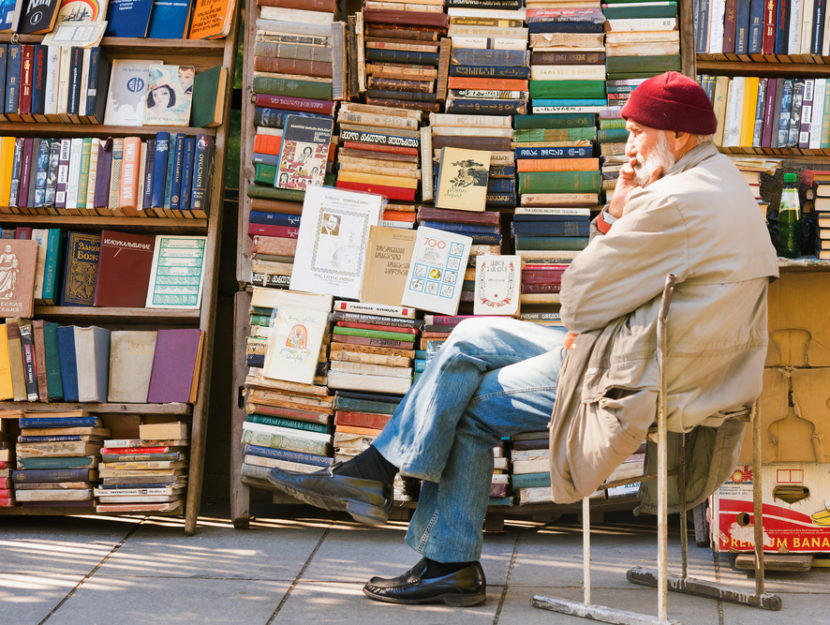 We’re excited about our new feature, Book Talk: a place where booksellers, bloggers, authors, reviewers, readers, critics, publishers and others can share what they’re excited about in the world of books. Post a comment, pass it on, and let us know what you think!

Getting to know booksellers has always been a great joy of my publishing career. I started out as one at the Hungry Mind in St. Paul, MN and have since always felt a kinship with them and have a tremendous respect for their work, a blend of the intellectual (“What’s the best book on Mayan culture”), the physical (unloading the daily UPS shipment), and the patient (“I read a review of a book. I don’t remember the name, but the cover is blue.”) I have met the industry’s best booksellers from New York; Coral Gables; Oxford, MS; New York; Portland, OR; Seattle; Ann Arbor, Kansas City; and beyond, and they are a tremendous group of professionals. Ibrahim and Malik Al–Rajab, booksellers from Baghdad who I had the fortune to meet while teaching for NYU-SCPS in Abu Dhabi, would be right at home with them.

The Al-Rajab’s story has been covered in PublishingPerspectives.com. The facts are bare as they devastating: in August 1999 their store, Al-Muthanna Library was destroyed in mysterious fire and the brothers have been working ever since to rebuild, a tough enough challenge as it stands, but made all the more difficult first by the war and now by the government. And, of course, there is the ongoing threat of violence. The literary hub of Baghdad, a book market on Mutanabi Street, was recently destroyed by a car-bombing and was just re-opened.

The brothers are kind, gracious, and speak with impeccable English. Their store was founded by their grandfather so they have never known anything but living and working in a great kingdom of literary, stories, and histories. When Ibrahim and I had a chance to speak at length, I told him how the recent history between our countries broke my heart. I asked, with absolute hope and definite naiveté, if after everything, there is perhaps some light on the horizon in Baghdad. Ibrahim answered directly, “There is no horizon.”

But neither brother has given up. They have relocated operations to a warehouse near their home and do most of their business online via an elegant PDF catalog with over 600 titles. For security, none of their packages are marked with a return address. Any one who sells books at the risk of their own safety is a hero in my world. On top of that, they run an online business with less than six hours of electricity a day. Still Ibrahim is dedicated to working with dealers and private individuals to rebuild his collection of Iraqi literature and history that at one time rivaled their national library.

During class later that day, I asked my publishing students to discuss the challenges they face. Piracy, poor access to data, lack of distribution were mentioned first. Ibrahim raised his hand and with a smile added, “No one reads.” It got the best laugh of the day. Despite everyhing Ibrahim and his brother have gone through, their biggest problem is one that every publisher or bookseller in the world could relate to, that true literacy and reading is always under threat.

After dinner at a beautiful outdoor restaurant, I was treated to shisha, a mild tobacco, mine flavored with grape and mint, smoked through a beautiful, three-foot hookah. When in Rome. With great joy Ibrahim hopped up from his chair and took several photographs of me. The next day he loaded them up onto a thumb-drive along with many he took of me teaching. It was a moment of great joy for us, two men who could have just easily been divided by our recent history who instead found volumes in common. The power of the book.