A Proper Education for Girls by Elaine diRollo 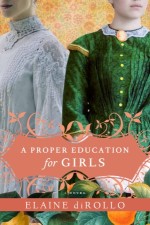 Readers at GoodReads are raving about A Proper Education for Girls:

• Judy liked “this Victorian Thelma & Louise pair of sisters!”
• Beth calls it an “absolutely magnificent novel!”
• Kat gave it five stars and says “the characters are priceless, the setting is hilarious,… and the two main heroines are plucky, resourceful, and thoroughly endearing.”

Not since the Brontës have we seen the likes of the Talbot sisters, plucky peach growers with a peculiar upbringing and a flair for subversion. Set in England and India in the mutinous year of 1857, A Proper Education for Girls tells the story of Alice and Lilian Talbot, twins separated for the first time in their lives by their martinet father. After an affair comes to a tragic end, Lilian is banished from the Talbot mansion and married off to a sickly missionary in India. Meanwhile, the plain but sharp-witted Alice remains on her father’s isolated estate, serving as curator to his strange and vast Collection under the watchful eye of the malevolent Dr. Cattermole. Will the sisters’ resourcefulness and profound devotion to each other be enough to save them?

• Read an excerpt from A Proper Education for Girls.