Break out the spirits and toast your favorite characters with this indulgent lineup. 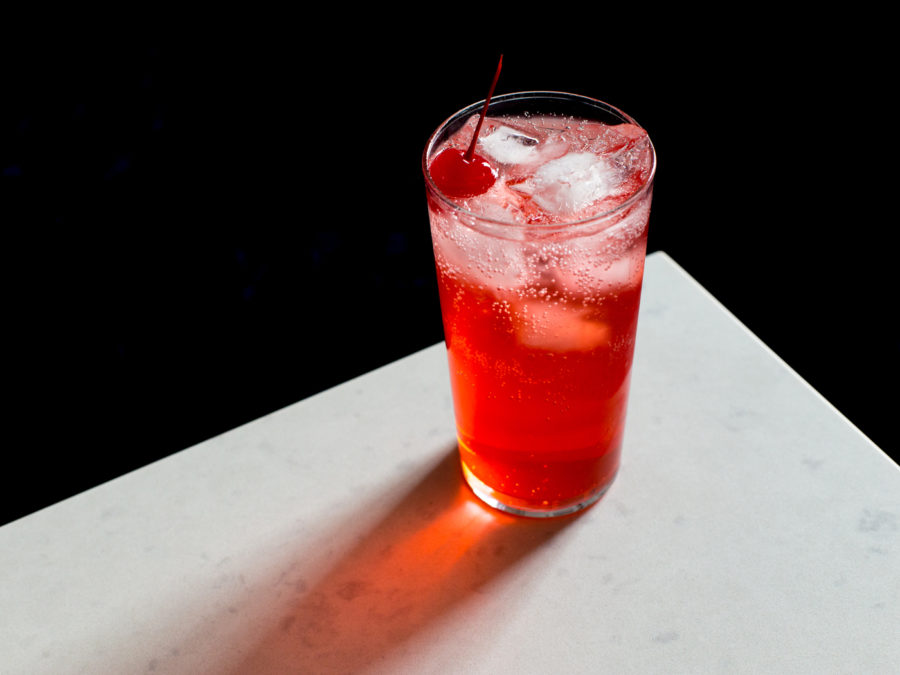 Tall tales and stiff drinks have gone together since poets traded verses and raised glasses in ancient Greece. As John Cheever noted a few millennia later, “The excitement of alcohol and the excitement of fantasy are very similar.” If you fancy a cocktail with your literary indulgences, consider the following pairings. 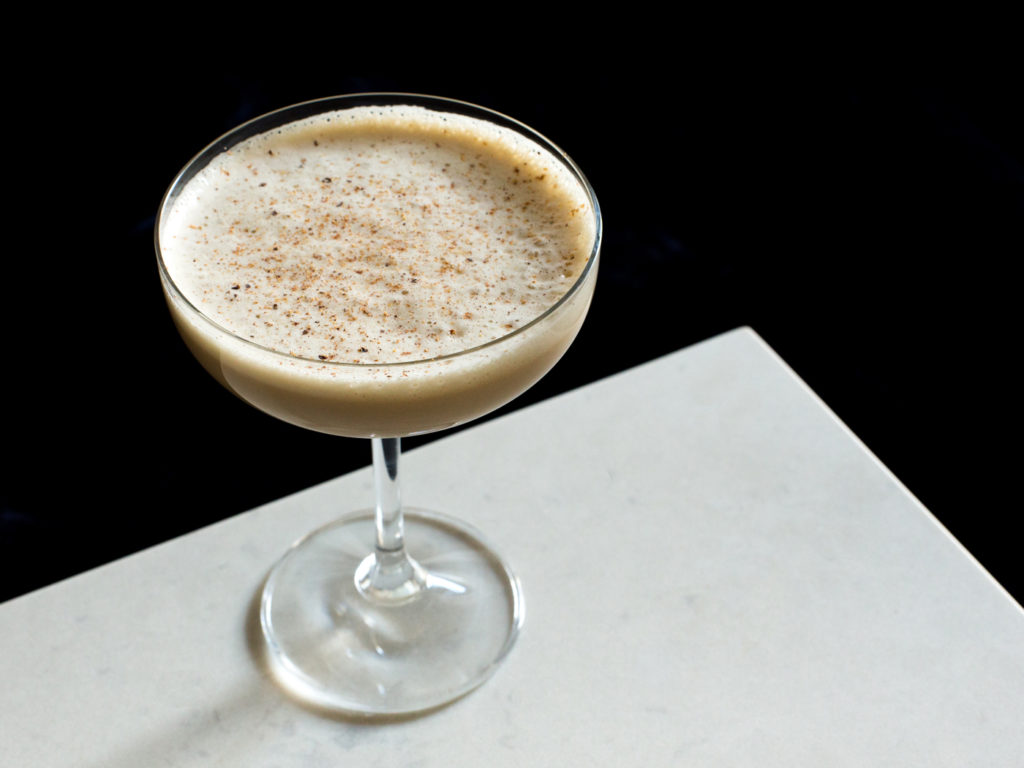 For Your Eyes Only by Ian Fleming

In Ian Fleming’s 1960 short story collection, James Bond finds himself in Venice—as Fleming himself did a few years earlier—among Italian gangsters. He posed as an affluent writer by “scattering thousand-lira notes like leaves in Vallombrosa” in fashionable venues like Harry’s Bar (home of the Bellini), Florian’s, and the Quadri. The brandy Alexander, a Prohibition-era drink made with cognac, crème de cacao, and heavy cream, is a secret signal for 007 and a CIA informant: “The creamy, feminine drink was so much cleverer than the folded newspaper, the flower in the buttonhole, the yellow gloves that were the hoary, slipshod call signs between agents.” 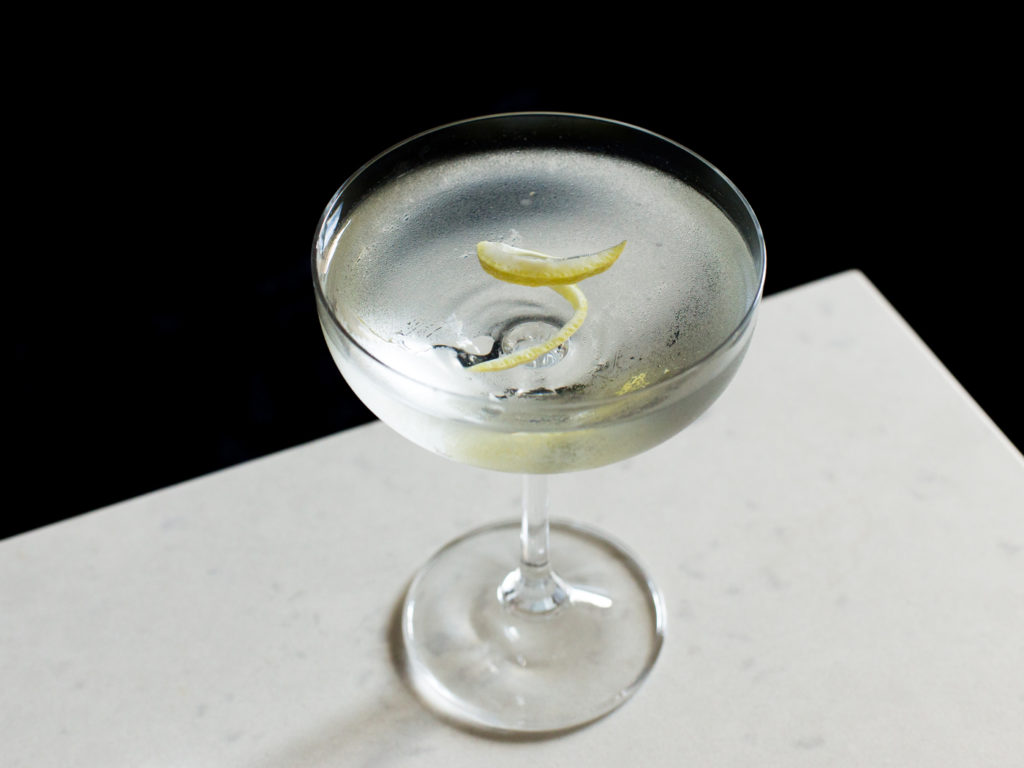 James Bond will forever be associated with the classic martini, but fans of his 1953 debut in Fleming’s Casino Royale prefer the drink he orders therein: “Three measures of Gordon’s, one of vodka, half a measure of Kina Lillet. Shake it very well until it’s ice-cold, then add a large thin slice of lemon peel. Got it?” Bond might have had a career as a mixologist in another life: “This drink’s my own invention,” he says. “I’m going to patent it when I think of a good name.” Its eventual moniker is a tribute to the beautiful Vesper Lynd, Bond’s companion and personal assistant to the head of the Soviet Union’s Section S (a woman he considers leaving the Secret Service to accompany on a more permanent basis). As Kina Lillet is no longer available, mixologists often substitute Cocchi Americano instead. 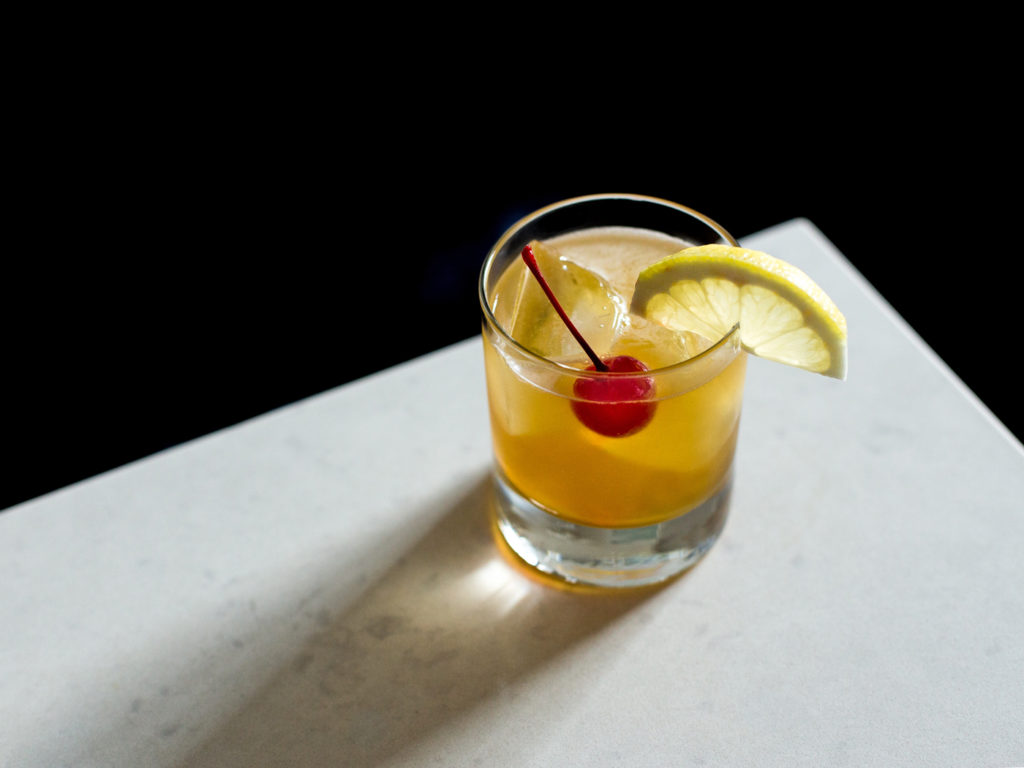 The Crying of Lot 49 by Thomas Pynchon

The Crying of Lot 49 is a very boozy book: it also features excessive kirsch (in fondue), Beaujolais, Jack Daniel’s, a thermos of tequila sours, dandelion wine, and Champagne cocktails. So why does the whiskey sour stand out? We meet Pynchon’s heroine, bored California housewife Oedipa Maas, as she’s reflecting on her afternoon, from her market run to “the layering of a lasagna, garlicking of a bread, tearing up of romaine leaves, eventually, oven on, into the mixing of the twilight’s whiskey sours against the arrival of her husband, Wendell (“Mucho”) Maas,” who “glid[es] like a large bird in an updraught towards the sweating shakerful of booze” when he gets home. The cocktail is a symbol of the couple’s stagnation—and a popular order when celebrating Pynchon in Public Day (the author’s birthday, May 8). 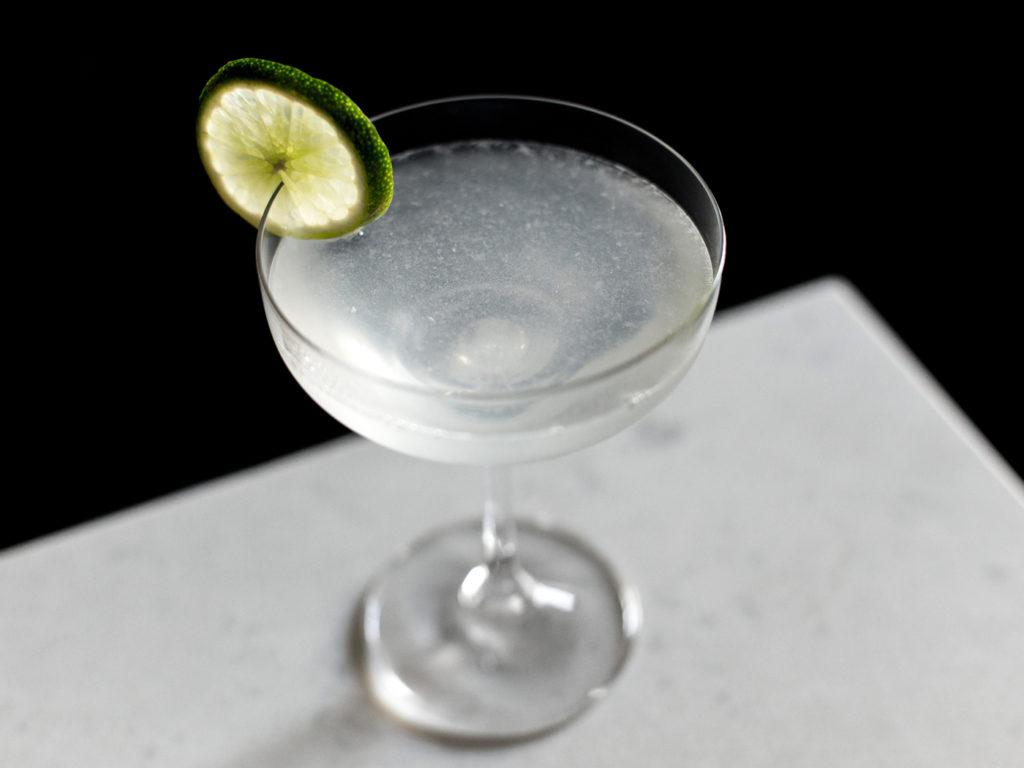 The Long Goodbye by Raymond Chandler

Raymond Chandler’s sixth Philip Marlowe novel introduces the private eye to Terry Lennox, a cheerless bar-fly with an urgent need to leave the country. Marlowe helps him flee to Mexico, then learns the man is suspected of murdering his wife—and that he’s reportedly killed himself. Before that tragic turn of events, Marlowe and Lennox strike up a friendship over drinks: “We sat in a corner of the bar at Victor’s and drank gimlets. ‘They don’t know how to make them here,’ [Lennox] said. What they call a gimlet is just some lime or lemon juice, and gin with a dash of sugar and bitters. A real gimlet is half gin and half Rose’s Lime Juice and nothing else.” That famous recipe cameo owes its significance to an ocean voyage Chandler took in 1952, the year before The Long Goodbye was published. The drink he had on that trip made such a strong impression that he eventually had Rose’s Lime Juice delivered by the caseload to his home in San Diego. 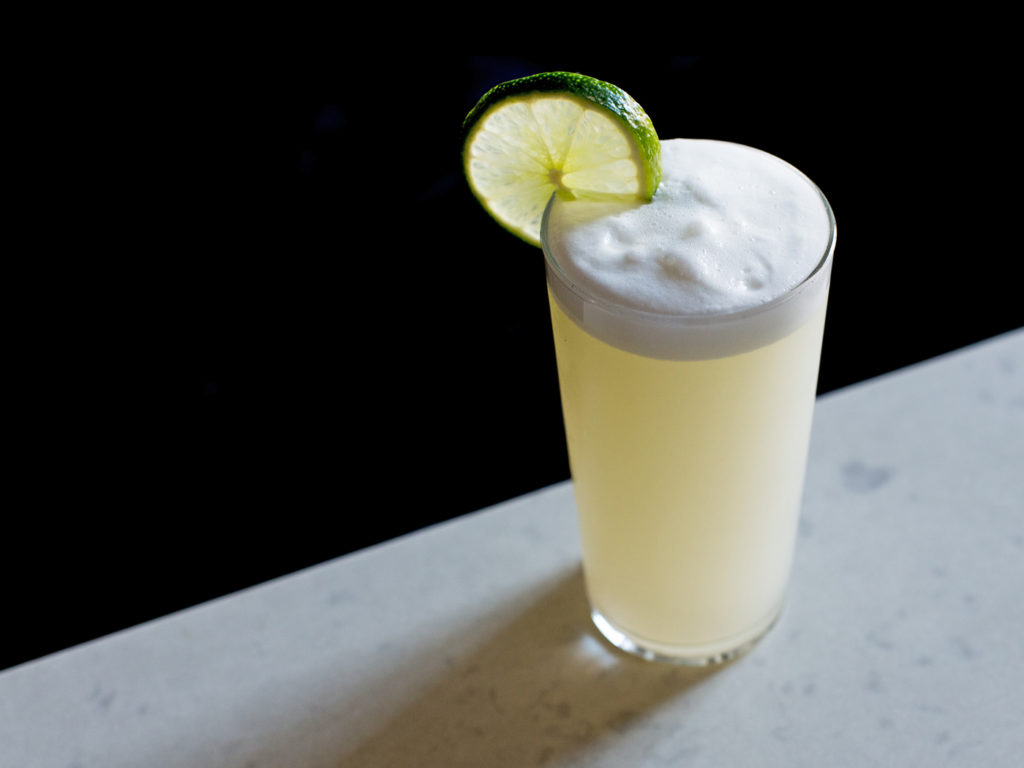 Love in the Ruins by Walker Percy

Dr. Thomas More, named after and descended from Sir Thomas More (the author of Utopia), is a small-town psychiatrist in Paradise, Louisiana. He’s invented the Ontological Lapsometer, a gadget that can diagnose and treat problematic mental states. He addresses his own difficulties less successfully: in spite of his egg-white allergy, he goes on a gin-fizz bender with his lover. “These drinks feel silky and benign,” he notes—and after seven of them, he develops hives and begins to suffocate. Like his character, Walker Percy once went into anaphylactic shock after drinking gin fizzes, and as he wrote four years after Love in the Ruins:  “Anybody who monkeys around with gin and egg white deserves what he gets. I should have stuck with Bourbon and have from that day to this.” (A classic gin fizz, should you choose to monkey around with it, consists of two ounces of gin, a dash of citrus, half a teaspoon of superfine sugar, one egg white, and three ounces of soda water.) 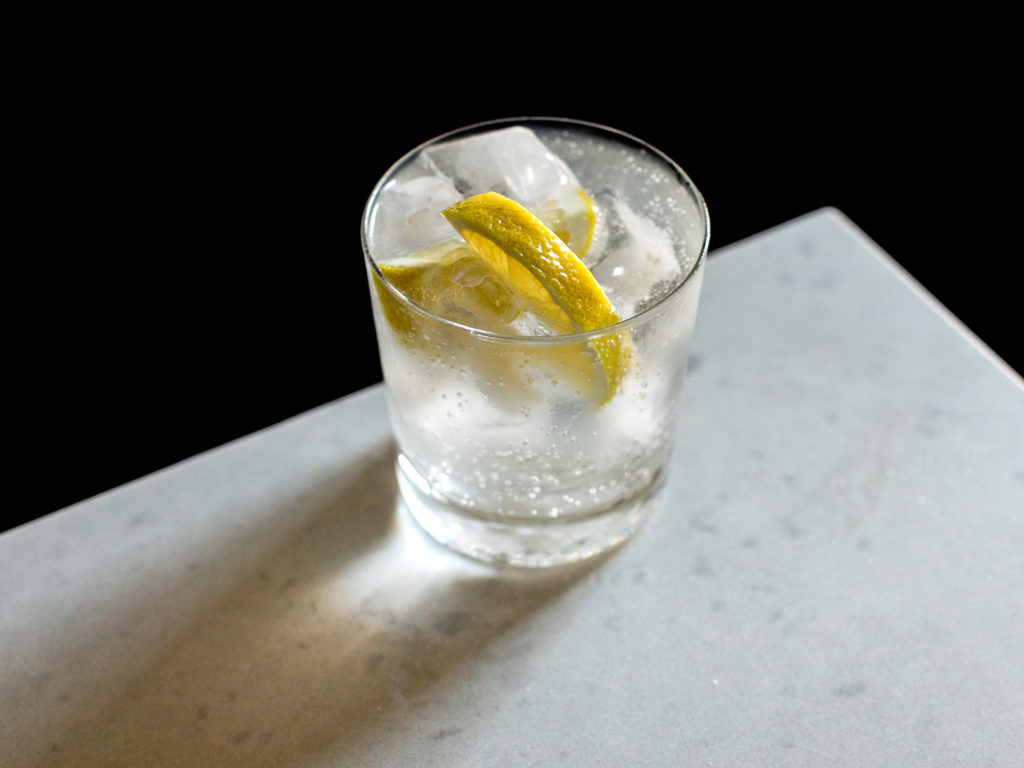 The first stanza of Larkin’s “Sympathy in White Major”—a poem from his 1974 collection, High Windows—features what many consider the most mouth-watering account of assembling a gin and tonic ever rendered in verse: “When I drop four cubes of ice/ Chimingly in a glass, and add/ Three goes of gin, a lemon slice,/ And let a ten-ounce tonic void/ In foaming gulps until it smothers/ Everything else up to the edge,/ I lift the lot in private pledge:/ He devoted his life to others.” “Sympathy in White” brims with mixed feelings—it concludes with, “Here’s to the whitest man I know – /Though white is not my favorite color”—but its featured mixed drink is a reliable friend. (Larkin made a not-insignificant number of them over the course of his life.) 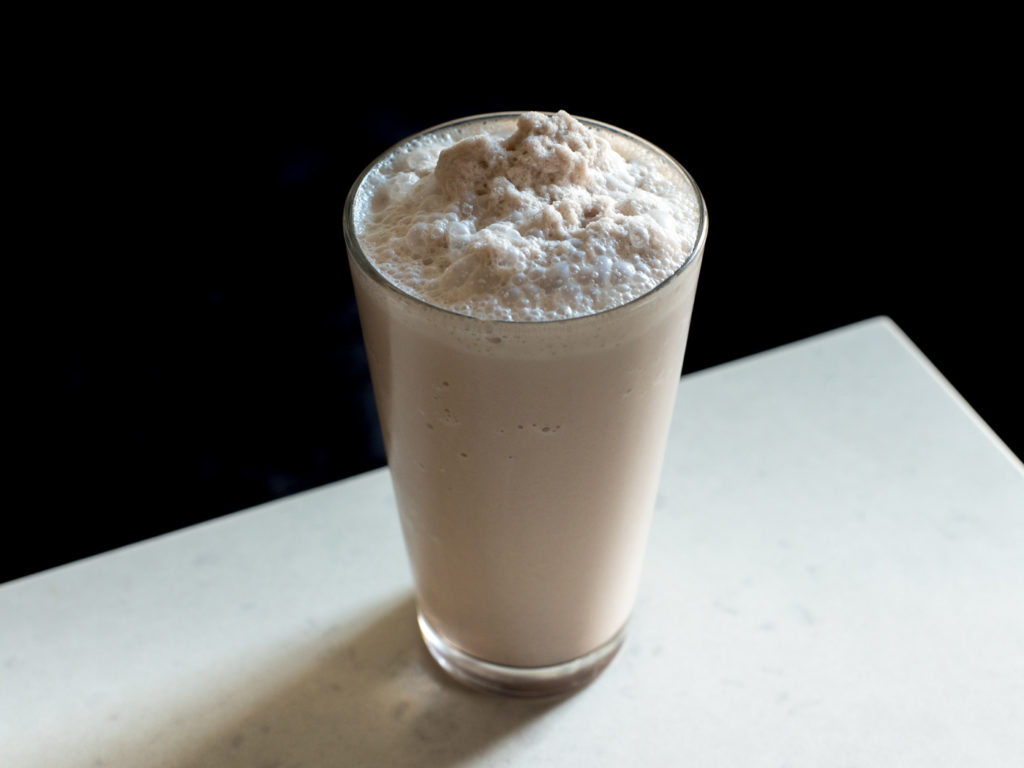 Doc is the smartest man on Cannery Row, and he’s obsessed with a particular drink: “He wondered what a beer milk shake would taste like. The idea gagged him a bit but he couldn’t let it alone. It cropped up every time he had a glass of beer. Would it curdle like milk? Would you add sugar?” His is a love that dare not speak its name: “If a man ordered a beer milk shake, he thought, he’d better do it in a town where he wasn’t known. But then, a man with a beard, ordering a beer milk shake in a town where he wasn’t known—they might call the police.” Since 2012, the curious can indulge urges like Doc’s burgers-and-beers joint Red Robin, which serves shakes made with vanilla soft serve and either Blue Moon and Cointreau or Guinness and Jameson. 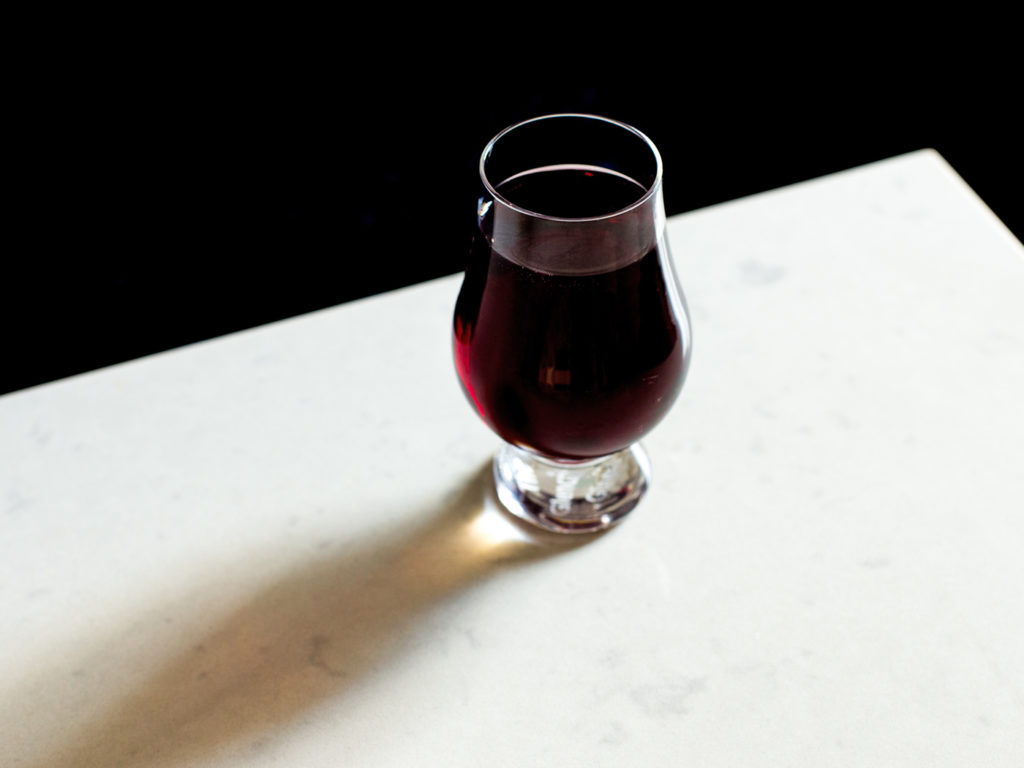 On the Road by Jack Kerouac

Like Doc’s beer milkshake, wine-spodiodi is conspicuously absent from most menus—for, like the beer milkshake, its virtues aren’t universally apparent. Sal Paradise and Dean Moriarty, the itinerant gents in Kerouac’s On the Road, encounter it on the lips of a character named Walter, “who ordered drinks at the bar and had them lined up and said ‘Wine-Spodiodi!’ which was a shot of port wine, a shot of whisky, and a shot of port wine.” For the celebration of Kerouac’s birthday in 2015, the intrepid folk at Philadelphia’s Tattooed Mom served up a more palatable version of the deconstructed drink: they made their “Spodiodi” with Spodee wine (inspired by Depression-era hooch that blended country wine with garden herbs, spices, and moonshine) and whiskey. 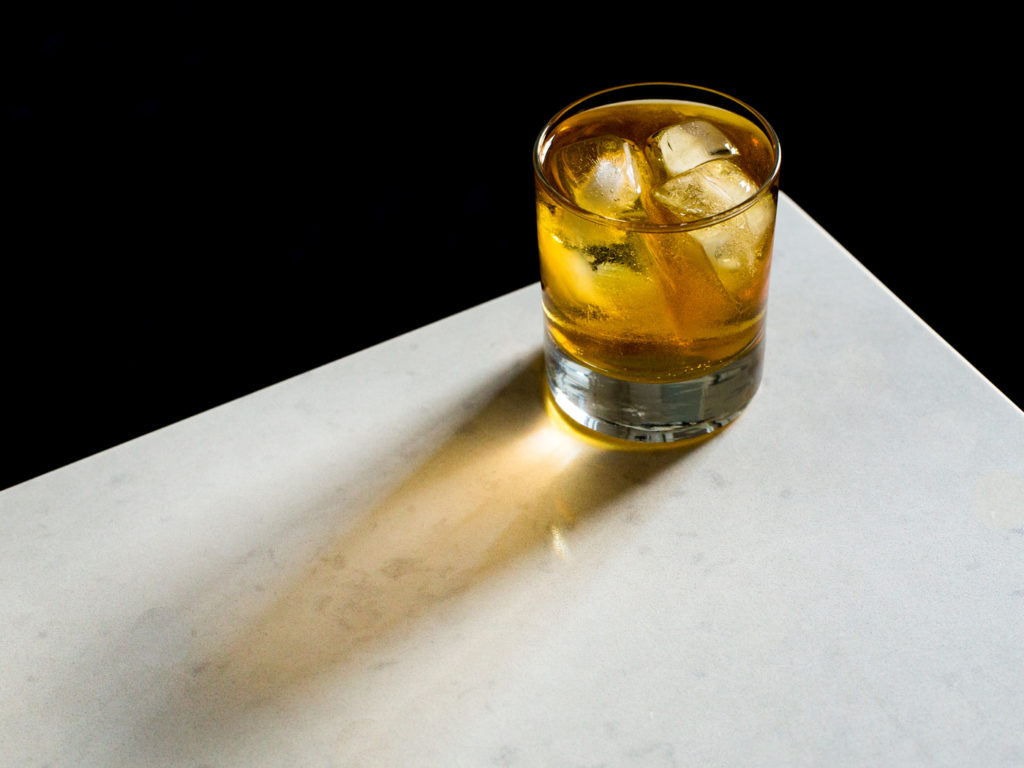 The Catcher in the Rye by J.D. Salinger

Holden Caulfield believes he has a knack for appearing older than “a goddam minor,” thanks to his hair, height, and posturing, but they’re of no use to him at the Lavender Room in Manhattan’s Edmont Hotel: “I ordered a Scotch and soda, and told him not to mix it—I said it fast as hell, because if you hem and haw, they think you’re under twenty-one and won’t sell you any intoxicating liquor. I had trouble with him anyway, though. ‘I’m sorry, sir,’ he said, ‘but do you have some verification of your age? Your driver’s license, perhaps?” I gave him this very cold stare, like he’d insulted the hell out of me, and asked him, ‘Do I look like I’m under twenty-one?’” On this occasion, alas, he does. Holden’s luck changes at Ernie’s in Greenwich Village, where he finds scotch-and-soda related success. 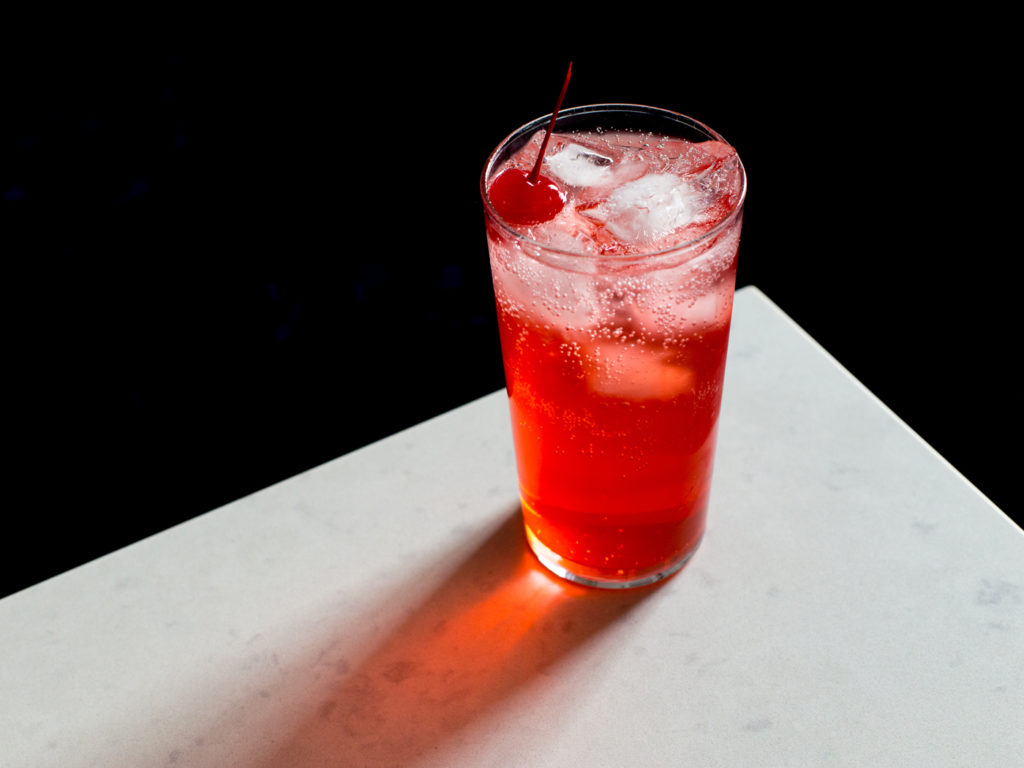 Fear and Loathing in Las Vegas by Hunter S. Thompson

The bartender Ngiam Tong Boon invented the Singapore Sling in 1915; Raoul Duke and Dr. Gonzo made it notorious in America, where it was the star of an ensemble cast of booze. In the course of their adventures, the duo fill their trunk (and themselves) with a quart of tequila, a quart of rum, a case of Budweiser, a pint of raw ether, and “a whole galaxy of uppers, downers, laughers, screamers.” It’s difficult to recommend any of that, even for literary purposes, but re-creating the Sling itself is good fun. San Francisco bar Elixir To Go put a northern California spin on the drink with their Yerba Buena Sling, made with rye whiskey, Heering Cherry, Ferrand Dry Curaçao, lemon and pineapple juice, and Dale DeGroff’s Pimento Aromatic Bitters. 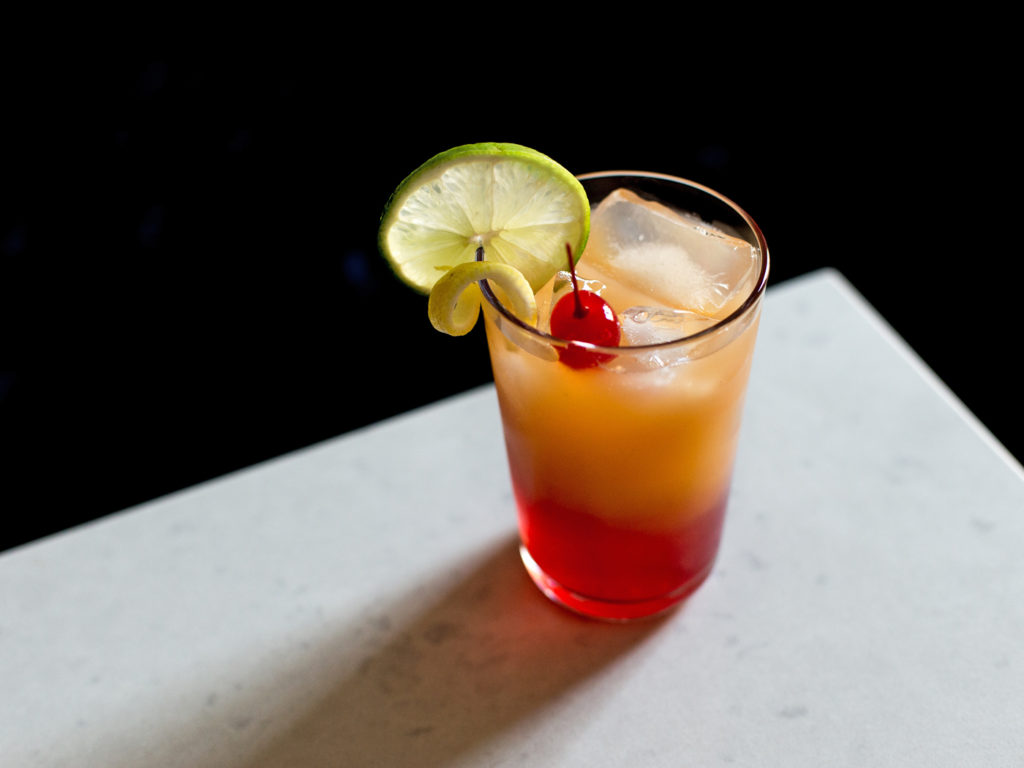 Wilkins Micawber—a character based on Charles Dickens’ father, who also landed in debtors’ prison—has a rough lot in life. A proven pick-me-up when he learns his water will be shut off after failing to pay his bills? Per Copperfield, it’s mixology: “To divert his thoughts from this melancholy subject, I informed Mr. Micawber that I relied upon him for a bowl of punch, and led him to the lemons. His recent despondency, not to say despair, was gone in a moment. I never saw a man so thoroughly enjoy himself amid the fragrance of lemon-peel and sugar, the odour of burning rum, and the steam of boiling water, as Mr. Micawber did that afternoon. It was wonderful to see his face shining at us out of a thin cloud of these delicate fumes, as he stirred and mixed, and tasted, and looked as if he were making, instead of punch, a fortune for his family down to the latest posterity.” 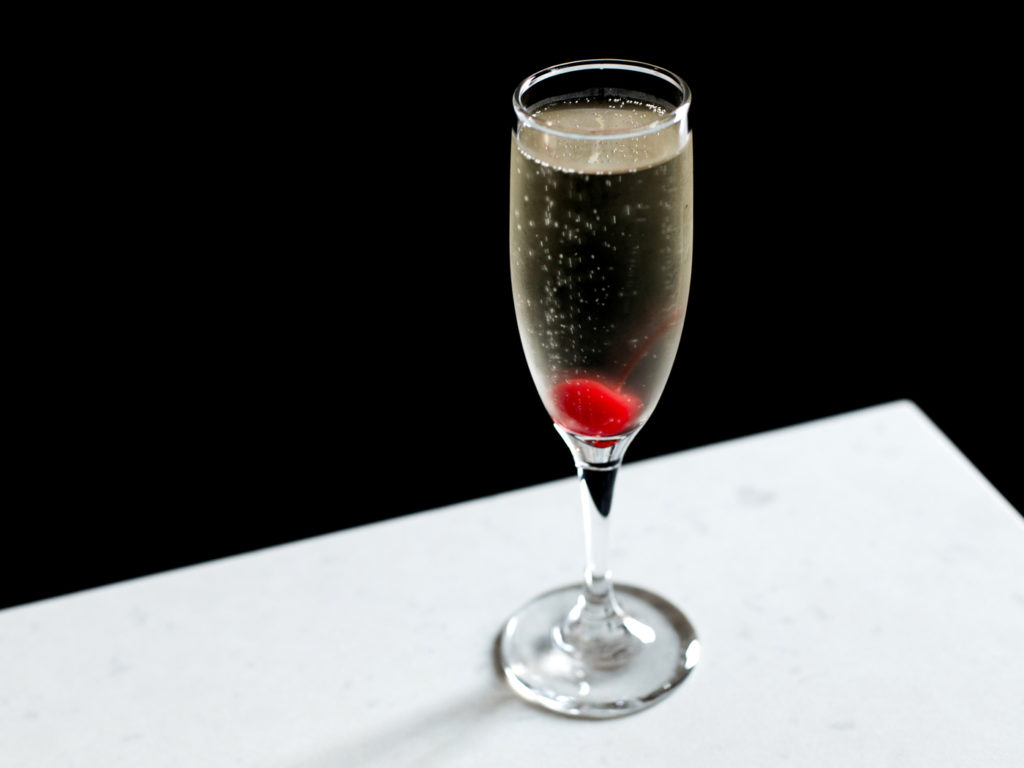 Breakfast at Tiffany’s by Truman Capote)

It’s difficult to settle on a single cocktail to pair with Truman Capote’s 1958 novella. Holly Golightly (Capote’s favorite character) taps an empty martini glass and orders a pair more; Holly and “Fred,” the unnamed narrator, drink Manhattans to celebrate Fred’s publishing success, and five pages in, a character mixes a “White Angel,” or a naked martini (“one-half vodka, one-half gin, no vermouth”). One might argue that its most festive drinks are the “champagne cocktails on the house” that Joe Bell sends over when he hears Fred’s literary news; a complimentary, publishing-related toast is a fine toast, indeed. A festive interpretation of the classic cocktail—a 99 by Torrence Swain, head bartender at Four Seasons Hotel in Washington, D.C.—combines Dom Perignon 2006, Stoli Elit, raspberry eau de vie, yuzu juice, and fresh raspberries.