Are People Judging You By Your Book’s Cover?

Book Shame: it's a real thing.

By Nora Zelevansky • 5 years ago

When my mother and father met—early in their respective college careers—my father had established a gimmick for picking up girls, or at least for projecting a cool, intellectual image (which, to be fair, he owned): He carried around a copy of Martin Buber’s I And Thou. (His method proved effective, if my parents’ long marriage is any indicator.)

Years later, when I was in college, I was intrigued by my eventual boyfriend’s passion for Albert Camus’ The Stranger. (That may have been a red flag, come to think of it.) And, still later, my now husband captivated me by dissecting The Iliad (which he still does from time to time).

These days, perhaps a Philip Roth book, rare graphic novel or Jonathan Safran Foer haggadah would serve the same purpose. (So might the right esoteric concert t-shirt and limited-edition sneakers.) Clearly, regardless of the decade, a book has the power to endow its readers with qualities of intellectual rigor and even sense of humor. When we expose a book on our desk at work, throughout our subway commute or even during dinner discussions, we are conscious of its power to define and categorize us in other peoples’ eyes. For better or worse.

It’s not that we pretend to appreciate books that, in fact, we have not. Rather, there are books we are proud to have read and absorbed (don’t get me started on Italo Calvino’s If on a Winter’s Night a Traveler), and books we only buy while wearing sunglasses and read under the cover of night or on an innocuous e-reader (see: my Jude Deveraux stash).

I, for one, am a hi-lo reader, for lack of a better term. Just as my wardrobe is equal parts Isabel Marant and TopShop (well, I wish), and my TV viewing ranges from The Good Wife to Survivor, I tend to alternate between genre fiction like mysteries and more critically-acclaimed “highbrow” reads. Even the books I write seem to straddle the commercial and literary. It makes sense: Juxtaposition is the nature of our entire culture these days. And I’m not sure one has more merit than another.

So should we feel embarrassed about the more commercial or pulpy books we read, if they give us pleasure? Do most of us even feel shame or pride anymore? How many of us are hiding Fifty Shades of Grey behind dimmed Kindles and iPads, while finding excuses to flash hardcover copies of Jonathan Franzen’s latest tome? (For the record, I never read Fifty Shades of Grey. See? I’m deflecting judgement and I never even read the book!) 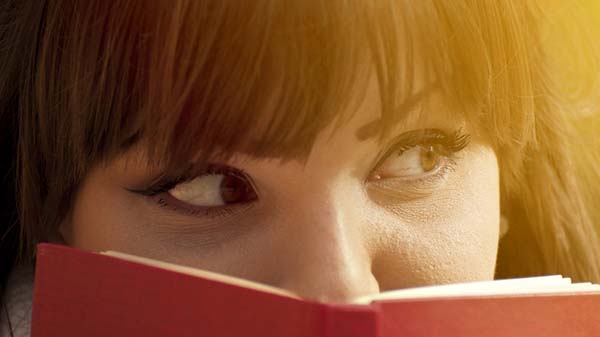 I am not alone. Certainly, there is a contingent of readers who admit to hiding certain choices to protect their reps. “I think e-readers have freed us to alternate more between ‘high’ and ‘low,’ which is great,” says Sara Stewart of Brooklyn, New York. “I would never publicly carry around print copies of some of the trashy stuff that’s on my Kindle.”

Still, others—including my own sister—note that there are reasons beyond impressing others to read more challenging literature in print: “The truth is that I find it difficult to read hardcore lit on a Kindle,” says Claudia Zelevansky, citing the need to focus. “So, my snobbery and fading eyesight work in tandem.”

Not everyone feels shame though. Some people are happy to flaunt their choices and feel that “low” is a misnomer: “I used to read a lot of commercial fiction in my 20s and early 30s and…I cared about what people thought of me as much as I care about Donald Trump,” jokes Patrick Lamonte Huey of Montego Bay, Jamaica, who gravitates more towards nonfiction these days. “I definitely have a love and appreciation for all things commercial because these ‘low’ creations tend to tell us just as much, if not more, about the world we live in.”

Kelly O’Reilly of Denver, Colorado relishes displaying her literary openness in the face of critics: “I don’t care what anyone thinks about what I’m reading, and I don’t judge what anyone else is reading either. If you do, then it doesn’t matter if you only read literary fiction: You’re a jerk. I’ll even eat Cheetos and drink generic-brand soda while reading my ‘lowbrow’ drivel, and maybe watch The Bachelor when I’m done.”

For those who alternate, what dictates what they read can be anything from travel to a rave review from a friend. “Depending on the vacation, I may reach for something a bit lighter, but I’ve also selected a big tome to dig into for a longer trip,” says Leah Goldstein of San Francisco, California. “It still has more to do with my mood and the book or books I’ve read recently. I try to mix it up consistently and satisfy whatever it is that I’m craving at that moment.”

Still, whether we feel shame or not, believe in dispensations for vacations or not, what we choose to raise for discussion may be another matter entirely. And all of it seems to be a reflection of societal phenomenons. “I tell snotty (or just well-read) people about the literary fiction versus funny people about the tween vampire crap,” laughs Pamela Buchwald, enjoying her perversity. “Occasionally, I tell the snotsters about the crap just to get a rise. That’s how I have fun these days.”

Go ahead. Judge this book by its cover. She dares you.

NORA ZELEVANSKY is the author of the novel, Will You Won’t You Want Me?, and Semi-Charmed Life. Her writing has appeared in ELLE, T Magazine (The New York Times), Town & Country, the Los Angeles Times, The Wall Street Journal and Vanity Fair, among others. She lives with her husband and daughter in Brooklyn, New York.