What happens when a writer gets bitten by the travel bug? 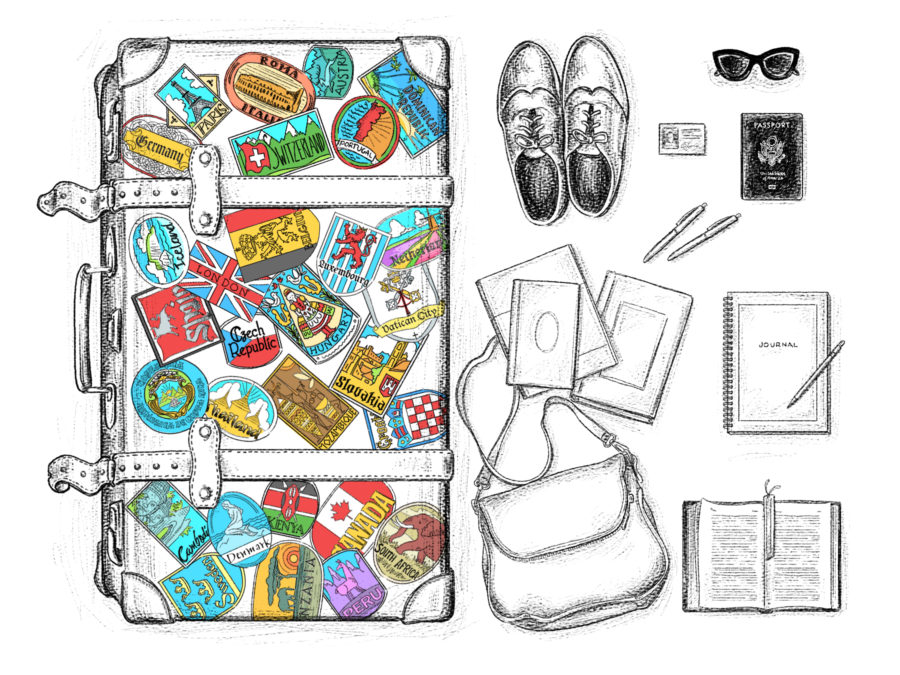 I’m on a mission. It’s not a complicated mission. Or even one in which some heroine will be saved at the end of it. But it’s a mission I’ve set up for myself: To reach 40 countries by the time I’m 40.

It started as a competition between my husband and me. As a European, he’d been to more countries than I because he had easy access. While I was taking family vacations in Maine, just one state over from my home state of New Hampshire, he was taking family vacations in Spain; just one country over from his home country of France. When we met in 2013, I only had seven countries under my belt, whereas he had 18. I decided then I could top that; I would top that. When I spread out the map in front of me, to tally all the countries it would take to reach 40, I realized it was no longer about competition. I was doing it for myself. And once I reach 40, I’ll set my sights on 80 before I’m 80. Or maybe 80 even before then.

I was bitten by the travel bug late in life. I guess if we’re considering 30 late. Up until 2010, I had never been anywhere outside the States besides Canada and the Dominican Republic. I knew that there were places I wanted to travel to and things I wanted to see, but I lacked the finances and couldn’t imagine traveling alone. So I went about my life in New York, living paycheck to paycheck, and assumed when I sold that big first novel (the one still sitting in my computer), I’d have the funds to go. And the funds to bring a buddy.

But when heartache struck in 2010, I cashed in my fears and went to Paris for the first time. Alone. What I realized was that I loved being alone in a foreign city. I loved wandering the streets alone, with my mind nowhere but in the moment. I loved the race of my heart when I realized I was lost and began to feel nervous. I loved the way it felt to read something in French and understand it, as if finally, years after taking French in high school and college, the words managed to find each other in my brain and the puzzle was solved. It was refreshing. It was magical. And it fit me, the loner at heart, perfectly.

When I met my husband, I got an instant travel companion. We traveled to the Alps, Switzerland, Iceland, Portugal, England, Luxembourg, Belgium, The Netherlands, Germany, Spain, Italy, Vatican City, Hungary, Slovakia, and the Czech Republic. On my own in the past couple months I’ve added Costa Rica, Thailand, Cambodia, Denmark, and Sweden to my list. By the time I reach my next birthday in September, Croatia, Kenya, Tanzania, South Africa, and if time allows, Mozambique will also get visits from me. Then I’ll set my sights on South America. I already know that Peru will be the first place I’ll go, because I’ve lived long enough without seeing Machu Picchu. It’s definitely time.

But it’s not just a matter of going to these places so I can check them off my list. It’s about going to experience them and fall in love with them. My trip to Cambodia had such a profound impact on my heart, that I plan to return to it every year for as long as I can. The way the Cologne Cathedral looks at night is not a sight I only want to see once in this lifetime. The Phi Phi Islands are not a place that you can go to and never return – you want to have to stop and catch your breath at its beauty more than a few times. And who, in their right mind, can bathe in the Gellért Baths in Budapest and say to themselves, “Nah. I never want to do that again?” Not me. I’ve yet to master my surfing in Costa Rica. I still haven’t found a taste for escargot in France. And there are still 480 more beers at ‘t Brugs Beertje in Bruges, that I need to try before I can be truly satisfied.

If I have a job that allows me to work from anywhere and an apartment in New York that I can easily sublet for months at a time, it seems foolish not to travel.

According to the WorldAtlas.com, there are 194 or 196, or maybe only 189, but possibly 192 countries in the world. Although borders and what’s regarded as individual nations are up for debate, the consensus is that there are 194 countries, but the US State Department recognizes 195 – I know; it’s confusing. Either way, I have narrowed it down to 122 countries that I’d like to see before I die. That sounds rather grim, doesn’t it? Rephrase: There are 122 countries I’d like to see in my travels. The countries that don’t make the list are ones that aren’t exactly friendly to foreigners; it’s not that I don’t want to see them. There have been those who have been to every country (a Norwegian man managed to do it by the time he was 37!), but since I’ll be rolling solo on many of my trips, I feel that some countries might be off limits – and I’ve yet to find anyone who wants to join me on a jaunt through the Middle East or the African Congo. Their loss, I suppose.

I have already made peace with the reality that maybe, just maybe, I won’t hit 40 countries by the time I’m 40. You never know what life will present or how many curve balls you end up trying to dodge but eventually just smack you in the face. I know that. But, as things are at the moment, I’ll keep moving forward with my plan.

As Anaïs Nin wrote in her diary, “We travel, some of us forever, to seek other states, other lives, other souls.” It’s in these words that I find inspiration. I’m not sure I’m seeking anything more than adventure and many more breathtaking moments, but if it grants me other lives or other souls to call my friends, then I know I will have done this whole thing called life right.