Actor, singer-songwriter, and author of The Reminders shows us his most meaningful titles.

By Val Emmich • 4 years ago 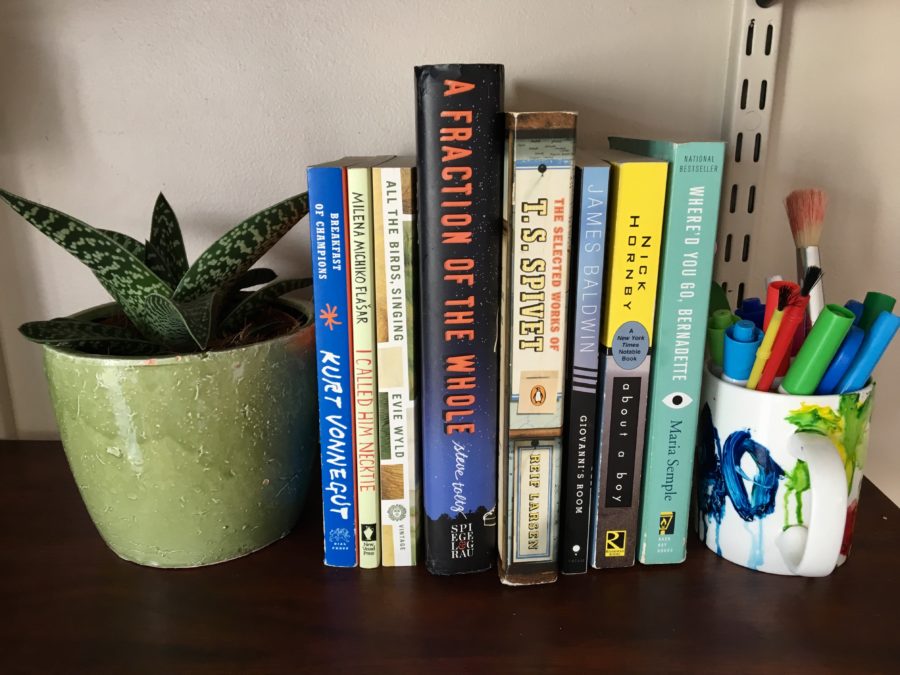 I’m looking for a strong reaction when I read. Books that make me laugh. Books that make me cry. If a book can do both, it’s all over, confetti falls from the ceiling. I’ve won. I’ve stumbled onto something special. That was my goal for The Reminders—to write a novel that blended comedy and tragedy. Not all of the books pictured here strike that balance, but each helped me find the right emotional timber for my story.

There are two books that are equally meaningful to me that aren’t pictured here because I read them in eBook format. One is A Single Man by Christopher Isherwood, which is lyrical and heartrending. Isherwood masterfully captures the zombie-like existence that is life after loss. The other is This Is Where I Leave You by Jonathan Tropper. Tropper’s novel begins with the line: “Dad’s dead.” The first line in my book is: “Dad forgot me.” That was an accident. Or was it? Hanging with the Foxmans is like spending time with my own dysfunctional family—only here, after all the laughs, I get to walk away with no hard feelings.

Click on the white dots on each book’s spine to read Val’s thoughts about the title. 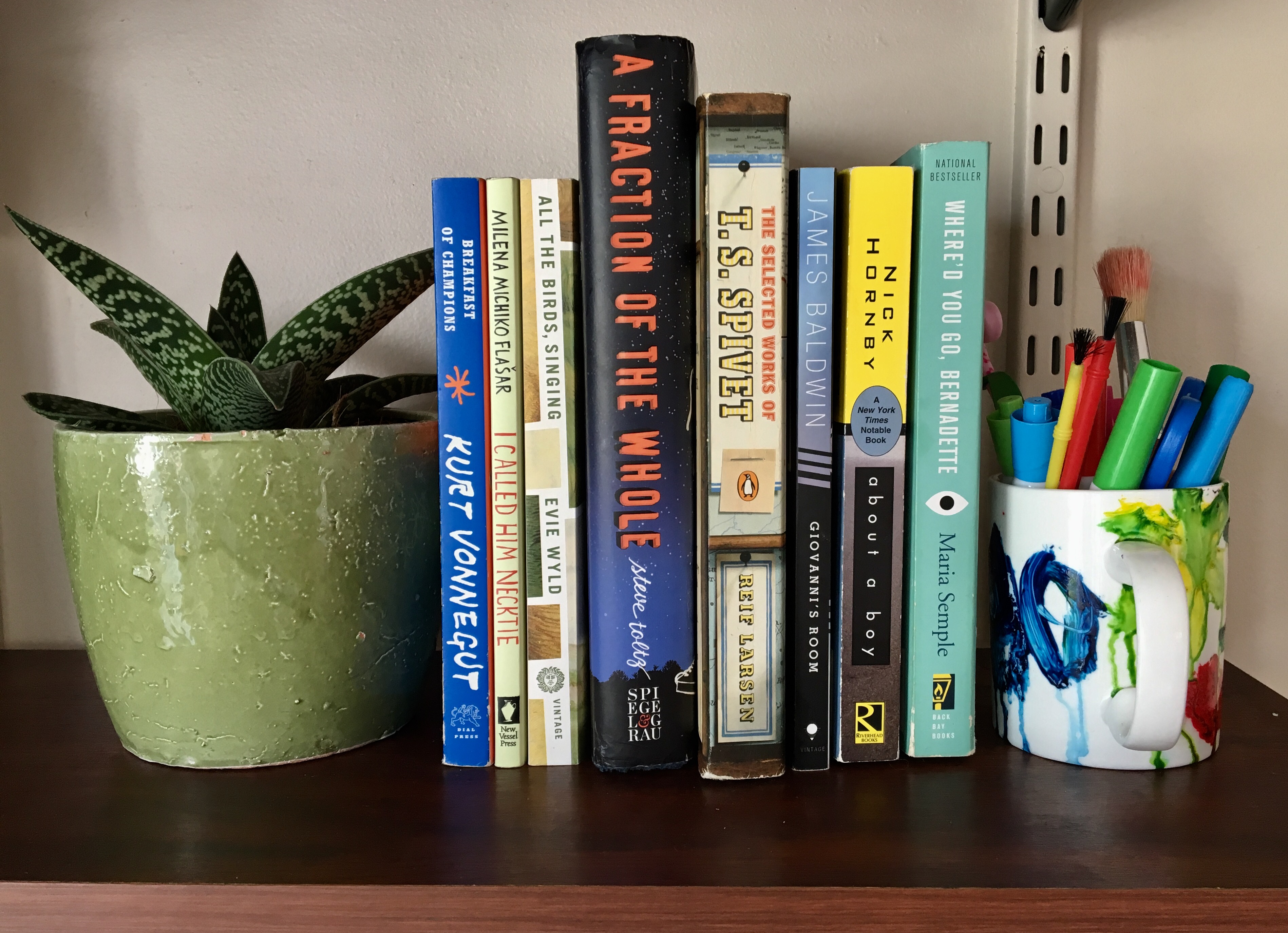 Breakfast of Champions by Kurt Vonnegut

I started reading Vonnegut only recently. I really appreciate the way he’ll describe the everyday world to the reader as if she hasn’t encountered it before. There’s a childlike innocence to it. And, Breakfast has to be the only work in the literary canon that features a drawing of an anus.

I Called Him Necktie by Milena Michiko Flašar

For a book so short, it digs in deep and lingers long after. Like The Reminders, it’s the story of an unlikely friendship between old and young. It should be on every list for its title alone.

All The Birds, Singing by Evie Wyld

It has the energy and drama of a thriller, but it’s more nuanced than that, and ultimately more devastating. Wyld brings her protagonist Jake’s past to life in a way that makes us truly believe she can’t get out from under it.

A Fraction of the Whole by Steve Toltz

I tell everyone about this book. It’s the kind of achievement that makes a writer ashamed of his own work. It’s absurd and unique and epic. Just read it.

The Selected Works of T.S. Spivet by Reif Larsen

Beautifully intricate illustrations fill the margins of nearly every page of this one-of-a-kind novel. Larsen’s ambition is only slightly less impressive than his execution. Stephen King called it a “treasure.”

Reading this book while writing mine was probably a mistake. I can never hope to write half as movingly as Baldwin does here (or anywhere). But it was something to aspire to. Particularly how Baldwin viscerally captures feelings of longing, regret, and desire. As everyone already knows, this novel is a classic.

About A Boy by Nick Hornby

I learned a lot watching how Hornby juggled this dual narrative of an adult and a child. Two drastically different characters come together with hysterically awkward results. Hornby makes it all look easy. It’s not.

For all the attention Where’d You Go, Bernadette gets for its hilarity (and it really is hilarious; one of the rare times “laugh-out-loud” holds true), the book is unexpectedly moving. Part of that has to with its inspired formatting (told through emails, faxes, hospital reports, live-blog transcripts). By sorting through the modern detritus they’ve left behind, we somehow know these characters more intimately than we ever could had we been allowed inside their minds.

About The Reminders: Grief-stricken over his partner Sydney’s death, Gavin sets fire to every reminder in the couple’s home before fleeing Los Angeles for New Jersey, where he hopes to find peace with the family of an old friend. Instead, he finds Joan.

Joan, the family’s ten-year-old daughter, was born Highly Superior Autobiographical Memory, or HSAM: the rare ability to recall every day of her life in cinematic detail. Joan has never met Gavin until now, but she did know his partner, and waiting inside her uncanny mind are startlingly vivid memories to prove it.

Gavin strikes a deal with Joan: in return for sharing her memories of Sydney, Gavin will help her win a songwriting contest she’s convinced will make her unforgettable. The unlikely duo set off on their quest until Joan reveals unexpected details about Sydney’s final months, forcing Gavin to question not only the purity of his past with Sydney but the course of his own immediate future.

Told in the alternating voices of these two irresistible characters, The Reminders is a hilarious and tender exploration of loss, memory, friendship, and renewal. 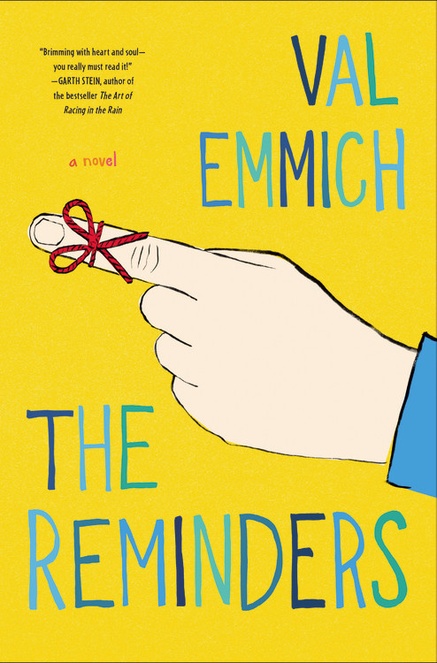 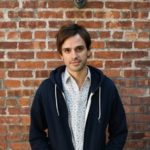 VAL EMMICH is a writer, singer-songwriter, and actor, once dubbed a "Renaissance Man" by the New York Post. He has had recurring roles on Vinyl and Ugly Betty as well as a memorable guest role as Liz Lemon's coffee-boy fling, Jamie, on 30 Rock. Emmich lives in Jersey City, New Jersey, with his wife and their two children. The Reminders is his first novel.

VAL EMMICH is a writer, singer-songwriter, and actor, once dubbed a “Renaissance Man” by the New York Post. He has had recurring roles on Vinyl and Ugly Betty as well as a memorable guest role as Liz Lemon’s coffee-boy fling, Jamie, on 30 Rock. Emmich lives in Jersey City, New Jersey, with his wife and their two children. The Reminders is his first novel.