The Soundtrack of my Memoir

After losing her job, her girlfriend and her mother, Barbara Schoichet got her motorcycle license at age 50 and hit the road. These are the songs that spurred on her journey and informed her memoir.

By BARBARA SCHOICHET • 4 years ago 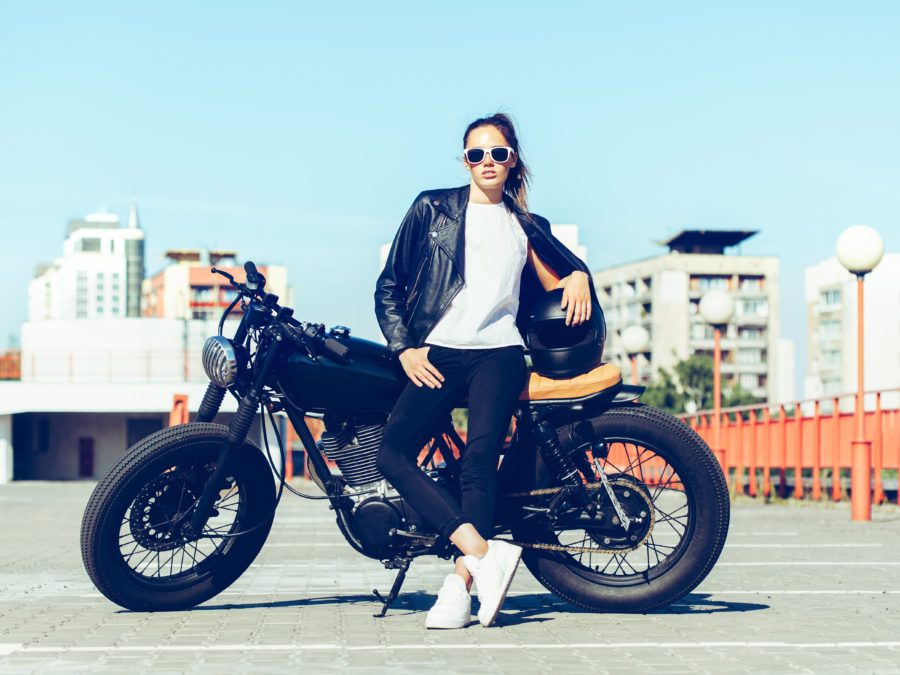 I’ve always felt that there are several versions of myself living within me. There’s the contemplative philosophical soul who read Zen and the Art of Motorcycle Maintenance three times, and the silly little girl who set her menu on fire in a fancy restaurant not too long ago. There’s the defiant, irreverent feminist who got arrested on the steps of the Pentagon protesting the War in Iraq, and the woman who got the psychological, emotional, and spiritual wind knocked out of her when she lost her job, her girlfriend, and her mother within six months. I am, and I continue to be, all of these people, all of which served as the catalyst for writing my memoir Don’t Think Twice: Adventure and Healing at 100 Miles Per Hour. Combined, the title and subtitle express how I feel about almost everything, especially about handling grief. Sometimes your life gets away from you like a convict on the run and you have to close your eyes and leap toward recapturing it. Sometimes you have to go beyond your comfort zone to find relief. And sometimes you just need to blow the doors off the structure of what you built as your life, and then rebuild yourself anew. The songs in my playlist, many of which appear in the book (all of which I sang on the road), reflect the philosophical, silly, defiant, irreverent, broken, and constantly changing woman that I am. See if you don’t see yourself in a few of them!

When I first got my motorcycle license I bought a 250 Honda Rebel, a bike so small it was half the size of the 1200 Sportster I ended up riding across the country. But that little bike gave me such a feeling of breaking away from my grief, and I rode it all over Los Angeles singing this crazy motorcycle song with silly lyrics like, “I don’t want a pickle, I just want to ride my motorcycle.”

“Get Off of My Cloud” — The Rolling Stones

Before my life went to hell, I liked to think that I didn’t have a care in the world…but, of course, I did, and every time that little voice in my head got me to worrying about something, I used to think of this defiant song. Same thing happened while I was on the road—sometimes I’d be riding along having a blast, and then I’d start to worry about getting back home to no job and no girlfriend…so I’d start singing this song to push the negative thoughts away.

This has always been my go-to lonely song. Every time a relationship ends, I sing it, and I certainly sang it when my girlfriend left me for her hairdresser. No one sings it better than Barbara Mandrell.

“Madman Across the Water” — Elton John

After losing so much over such a short period of time, I felt like a madwoman, wanting friends to visit, yet wanting to be left alone too. When my sisters forced me to go to Las Vegas to celebrate my 50th birthday less than a month after we buried our mom, they got front row seats to Elton John’s concert and we were allowed onstage to sit around his huge red piano. This is one of the songs Elton sang, and the lyrics haunted me, “Will they come again next week, can my mind really take it.” In the end, the trip to Las Vegas gave me clarity and suddenly I knew how I was going to get past my grief. I describe the whole thing in Chapter 3: It’s Not the End of the World.

I must have had a premonition that the bottom was going to fall out of my life because I was always listening to this song that portends doom. Then, later, on the road, I remember leaving Graceland and heading toward West Memphis when I noticed the sky was black with storm clouds. Somehow I thought I could ride past it, but then the skies opened up and it rained so hard I couldn’t see three feet in front of me.

“Shelter from the Storm” — Bob Dylan

Riding in that downpour was one of the scariest things that happened to me on the road, but when I finally managed to make it to a Red Roof Inn I met a woman I dubbed “Mother Teresa” for her extraordinary kindness. She washed and dried my wet clothing, and shared some moonshine along with a lot of wisdom. I fantasized that she was the woman Dylan sang about in this song, as you can read about in Chapter 21 of my memoir. This version of the song is from Woodstock:

This old Cole Porter song felt so appropriate that I sang it almost every day on the road. My favorite rendition is the one that David Byrne of the Talking Heads does:

“Tangled Up In Blue” — Bob Dylan

Like a lot of writers and artists, I struggle with depression, and Dylan’s lyrics in this song always resonate with me. It was as though I was tangled up in sadness, and one morning, in a bed-and-breakfast in Virginia, I actually woke up tangled up in blue sheets after a restless night.

Though I love almost all of Dylan’s music, this is by far my favorite of his songs—not only is the rhythm perfect for riding a motorcycle, but lyrics like “I’ve been trying to get as far away from myself as I can,” spoke to me back when I did my ride and still speak to me today. Sometimes I just think too much!

Every time I rode into a place I felt anonymous, and every time I left, I felt the same…like a complete unknown, like a rolling stone. This version of Dylan’s classic is so typically Dylan—out of tune, offbeat, and unbelievably unique. And I love the snippet of an interview at the beginning of this version:

“On the Road Again” — Willie Nelson

“What’s Love Got To Do With It” — Tina Turner

Back when I was still in my twenties, I used to hang out at gay bars and dance. One time I met my ideal woman and we danced to this song. I got her number and washed it in my jeans…and never saw her again. She became my Cinderella, my fantasy love that didn’t feel real after a while…but isn’t that true about anything you set up as an “ideal?”

This song reminds me of all the times I did something and regretted it—and that’s a lot of times. The Ramones wrote the song in response to the public outcry after Ronald Reagan laid a wreath at a cemetery in Bitburg, Germany, where Nazi soldiers, specifically Hitler’s Waffen-SS, were buried. To add insult to injury, Reagan failed to visit a single concentration camp memorial.

The highway in this song, known as the Blues Highway, runs through Dylan’s hometown of Duluth, Minnesota. It’s not a bluesy song and is actually kind of funny. It’s about the weird things and odd people that wind up on that particular stretch of road. Well, I never was on Highway 61, but when I left Arkansas I was on Highway 71 and that’s when this song popped into my head and I pretended I was Dylan on his Triumph Tiger 100, a motorcycle he wrecked somewhere in Woodstock. Anyway, a strange thing happened to me on Highway 71 too, and I wrote about it in Chapter 25: Road Kill or Buzzkill? This particular version of the song is my favorite, performed in Florence, Italy (Florence was my mother’s name):

When I left the junkman who I met on Highway 71, I was upset because he’d gotten me to think too much. But then I came upon a sign that completely turned me around—it was offering squirrels for sale and I got silly. Suddenly I burst out singing the most inane song I knew, which, of course, was one of Dylan’s. I love all of his lyrics, many of which seem to have no meaning, but I’ve always found that if you study something long enough, you’ll discover some kind of significance, even that which the author may not have intended.

“Take it Easy” — The Eagles

When I rode through Winslow, Arizona, this song was playing everywhere, and it stayed in my head for hours after I left. It’s still a favorite of mine, even though it reminds me of how a rotten teenager stole my phone. She offered to take my picture, and when I gave her my cell, she took off. Still, the song takes me back to my teenage years when I thought I was cool but I wasn’t; when I was as naïve as I am today, still trusting people and hoping for the best.

Though the words to this song fit how I felt about my lost relationship, I actually chose Don’t Think Twice for the title of my book because I always felt that if I had thought more than once I might never have taken that motorcycle trip alone and with so little experience. Of course, I’m glad I did it, because every time I think something is insurmountable, I remind myself of completing that ride.

I got pretty cocky when I got back from my cross-country road trip, and I felt like I could do just about anything. That’s when a motorcyclist is in big trouble. I was flying through my neighborhood listening to Dylan’s soundtrack to Pat Garrett and Billy the Kid (1973 film), when a woman opened her car door and I freaked out and crashed, sliding about 40 feet! The version of “Knockin’ on Heaven’s Door” is much smoother on the album, but I like this unplugged ragged version best:

To listen to Barbara’s playlist on Spotify: 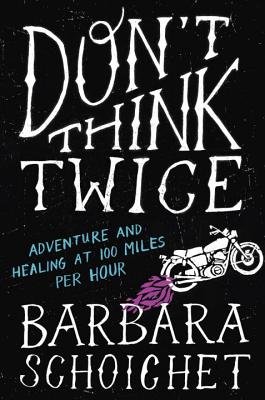 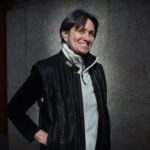 BARBARA SCHOICHET has a Ph.D. in creative writing from Lancaster University in England. An avid biker, she’s owned (and wrecked) several motorcycles and logged more than ten thousand miles, including the nearly four-thousand-mile journey chronicled in Don’t Think Twice.

BARBARA SCHOICHET has a Ph.D. in creative writing from Lancaster University in England. An avid biker, she’s owned (and wrecked) several motorcycles and logged more than ten thousand miles, including the nearly four-thousand-mile journey chronicled in Don’t Think Twice.