Violence and Making Sense: an Essay from Jay Caspian Kang

Cho Seung-Hui, the shooter in the Virginia Tech massacre, was a Korean American from the South who had entered college with dreams, however mangled and bizarre, of becoming a writer. That same sentence could have been written about me.

By Jay Caspian Kang, author of The Dead Do Not Improve • 8 years ago

Three years ago, I set out to write a novel about Cho Seung-Hui, the shooter in the Virginia Tech massacre. Since Columbine, I have held an unhealthy interest in the way the media, and by extension, the greater moralizing population, processes mass killings.

As the evidence of Cho’s derangement began to surface in the videos, short stories, and plays he left behind, it became clear that Cho had been trying to tell a righteous story, where the “rich kids” and “brats” were cleansed from the earth by a sort of Frankenstein’s monster of messianic figures and revenge-movie heroes.

The story, of course, makes no sense, but the similarities between Cho and my younger self, who also had fits of anger at those same collegiate rich kids, who spent time in counseling as an adolescent for drawing disturbing pictures in class, presented a discomforting question. What, really, was the difference between us?

It has been a particularly fruitless obsession. Every time a report of a mass killing flickers through my Twitter feed, RSS reader, or any of the dozen or so ways in which I receive the news, I go straight to the television and watch CNN or Fox News or whatever else without an educated opinion about anything. I have no opinions on gun control that go beyond what the shouting heads might say. My thoughts on what societal factors might trigger these killing sprees rarely stray far from a morose, “Good Lord, how have we come to this?” This past April, I headed up to Oakland after another Korean American named One L. Goh executed seven of his former classmates at Oikos University, a small nursing school with ties to a local Korean American church. After conducting a month of interviews and spending days parked out in front of the school, I came no closer to any sort of actionable idea.

There is simply no allegorical, edifying, or fully formed way to show completely senseless acts of violence. The narrative always skids right up to the point where the young man, who was so much like other young men, begins assembling a small armory. After the jump, a story that had been told in the fraudulent math that tries to balance a recognizable human childhood with an incomprehensible, inhuman act switches over to the fractured language of the newscast: helicopter images, computer reenactments, grainy home videos, 911 calls, yearbook photos, the shots of children who could be our children crying in small huddles outside the crime scene. After two years of reading, watching, and listening to pretty much everything about Cho Seung-Hui, I realized, with a thin flare of defeat, that the distance between us could never be measured, at least not in any instructive way.

The Dead Do Not Improve was written out of this bewilderment. Only through fiction’s slower, yet more cha- otic, logic could I find a way to talk about Cho Seung-Hui. The novel is not a polemic or even political. But if fiction is the way some neurotic or overcaffeinated people unravel, shape, and animate questions that ultimately have no good answer, the book is my entry into the parade of misshapen golems. Again, there are no answers about mass killings or Cho in the novel. (I don’t even really know what a novel of determinations, explanations, and answers about senseless mass killings would contain. Who would be the protagonist? What would the cover look like?)

Cho Seung-Hui, Adam Lanza, James Holmes, Dylan Klebold, Eric Harris, and the dozens of other men who, over the past two decades, walked into very public spaces with guns inspire terror because of everything we don’t know. When your particular churn logic cannot limit you and your demographic out of the potential targets, you start wondering what, exactly, has come of this country.

The story of Wade Michael Page, the man who apparently killed seven people and wounded three more at a Sikh temple in Oak Creek, Wisconsin, does not screech to a halt when a forty-year-old white supremacist starts stockpiling weapons. We can do the math behind Page’s killing spree through the same pathways with which the greater American public—however bullheadedly—processes terrorists. A man gets caught up in an ideology of hate. He decides to act on this ideology in the most horrific way possible.

Point A leads directly into point B and although point B is horrific, it is something we have grown to understand. Who, when first hearing of the news, didn’t assume the killings were an act of racial hatred? Who didn’t start to piece together the turbans, the brown skin, the epidemic of post-9/11 violence that is underreported, or at least never has all its incidents connected? Because the logic of Oak Creek can be traced to an endpoint (even if the logic is wrong) and because that endpoint only implicates a small percentage of Americans, the story of the massacre at Oak Creek will be, by definition, exclusionary. It will be “tragic” and “unthinkable” and “horrific,” but it will not force millions of Americans to ask potentially unanswerable questions. It will not animate an angry public. Chick-fil-A will outlast Oak Creek as a source of indignation.

But for those who cannot limit themselves out of the victims of Oak Creek, logic follows a brutal path. Many of the Sikh leaders interviewed over the two days after the attack have intimated that they had been dreading this day for years. For them and many “brown” people in the United States, the years since 9/11 have been filled with violent incidents that are all too explainable. I do not mean to say that we should compare and conflate Newtown, Aurora, and Oak Creek. Quite the opposite. We should remember that Newtown was the latest in an American epidemic of mass, easily produced violence, while Oak Creek was the product, although certainly not the end product, of what happens when a society turns a colorblind eye toward years of violence against brown people in the name of 9/11 and the War on Terror.

This is not the time to throw up our hands and hide behind the silencing curtain of race blindness. Nor is it the time to repeat the polite, leveling logic that says that all American tragedies are alike. It is certainly not the time for literary bewilderment. At a time when many political leaders have nothing but the politest condolences for the dead, Newtown, Aurora, and Oak Creek should all be at the forefront of our national discussion. One should never stand in for the others.
        
       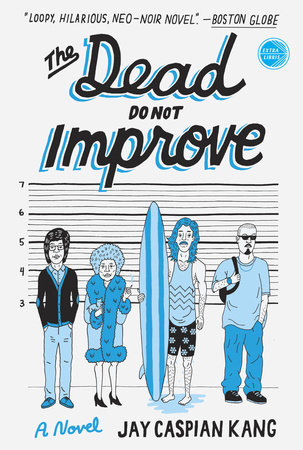 JAY CASPIAN KANG was born in Seoul and grew up in North Carolina. He is a contributing writer at the New York Times Magazine and works as an editor at Grantland. He lives in Los Angeles. Visit the author on Twitter @jaycaspiankang, on Tumblr, and on Goodreads.

About Jay Caspian Kang, author of The Dead Do Not Improve

JAY CASPIAN KANG was born in Seoul and grew up in North Carolina. He is a contributing writer at the New York Times Magazine and works as an editor at Grantland. He lives in Los Angeles. Visit the author on Twitter @jaycaspiankang, on Tumblr, and on Goodreads.