Critics say The Room is Franz Kafka meets Melville's ‘Bartelby, the Scrivener' with a dash of the film Brazil thrown in. Dive into the read and tell us what you think in a comment!

The first time I walked into the room I turned back almost at once. I was actually trying to find the toilet but got the wrong door. A musty smell hit me when I opened the door, but I don’t remember thinking much about it. I hadn’t actually noticed there was anything at all along this corridor leading to the lifts, apart from the toilets. Oh, I thought. A room.

I opened the door, then shut it. No more than that.

I had started work at the Authority two weeks before, and in many respects I was still a newcomer. Even so, I tried to ask as few questions as I could. I wanted to become a person to be reckoned with as quickly as pos-sible.

I had gotten used to being one of the leaders in my last job. Not a boss, or even a team manager, but some-one who could sometimes show other people what to do. Not always liked, not a sycophant or a yes- man, but well regarded and treated with a certain respect, possibly even admiration. Ever so slightly ingratiating, perhaps? I was determined to build up the same position at my new place of work as soon as I could.

It wasn’t really my decision to move on. I was fairly happy at my last job and felt comfortable with the routines, but somehow I outgrew the position and ended up feeling that I was doing a job that was way below my abilities, and I have to admit that I didn’t always see eye to eye with my colleagues.

Eventually my former boss came and put his arm round my shoulders and told me it was time to look for a better solution. He wondered if it wasn’t time for me to make a move? Move on, as he put it, gesturing upward with his hand to indicate my career trajectory. Together we went through various alternatives.

After a period of consideration and reflection I decided, in consultation with my former boss, upon the big new Authority, and after a certain amount of discussion with them it turned out that a transfer could be arranged without any great difficulty. The union agreed to it, and didn’t put the brakes on like they so often do. My former boss and I celebrated with a glass of nonalcoholic cider in his office, and he wished me good luck.

The same day the first snow fell on Stockholm, I carried my boxes up the flight of steps and into the entrance of the large, redbrick building. The woman in reception smiled. I liked her at once. There was something about her manner. I knew straightaway that I had come to the right place. I straightened my back as the words “man of the future” ran through my head. A chance, I thought. Finally I would be able to blossom to my full potential. Become the person I’ve always wanted to be.

The new job was no better paid. Quite the opposite, in fact, it was actually slightly worse in terms of perks like flextime and vacation. And I was forced to share a desk in the middle of an open- plan office with no screens. In spite of this, I was full of enthusiasm and a desire to make a personal platform for myself and show what I was capable of from the start.

I worked out a personal strategic framework. I arrived half an hour early each morning and followed my own timetable for the day: fifty-ﬁve minutes of concentrated work, then five- minute break, including toilet breaks. I avoided any unnecessary socializing along the way. I requested and took homefiles documenting previous policy decisions so as to be able to study which phrases recurred, and formed the basic vocabulary, so to speak. I spent evenings and weekends studying various structures and investigating the informal communication networks that existed within the department.

All this so that I could quickly and efficiently catch up and create a small but decisive advantage over my colleagues, who were already familiar with our work-place and the pervading conditions.

I shared my desk with Håkan, who had sideburns and dark rings under his eyes. Håkan helped me with various practical details. Showed me round, gave me pamphlets, and e- mailed over documents containing all manner of information. It was presumably a welcome break from work, a chance to escape his duties, because he was al-ways coming up with new things that he thought I ought to know about. They might be to do with the job, our col-leagues, or decent places to have lunch nearby. After a while I felt obliged to point out to him that I had to be allowed to get on with my work without interruption.

“Calm down,” I told him when he turned up with yet another folder, trying to get my attention. “Can you just calm down a bit?”

He calmed down at once and became considerably more reserved. Presumably sulking because I had made my feelings plain from the outset. It probably didn’t sit well with the accepted image of a newcomer, but it ﬁt with the reputation for ambition and tough tactics that I was happy to help spread about myself.

Slowly but surely I built up profiles of my closest neighbors, their character and place in the hierarchy. Beyond Håkan sat Ann. A woman somewhere round fifty. She seemed knowledgeable and ambitious, but also the sort of person who thought she knew everything and liked being proven right. It soon became clear that everyone turned to her when they didn’t dare approach the boss.

She had a framed child’s drawing near her computer. It showed a sun sinking into the sea. But the drawing was wrong, because on the horizon there were land-masses sticking up on both sides of the sun, which of course is impossible. Presumably it had some sort of sentimental value to her, even if it wasn’t particularly pleasant for the rest of us to have to look at.

Opposite Ann sat Jörgen. Big and strong, but doubt-less not possessed of an intellect to match. Pinned up on his desk and stuck all round his computer were loads of jokey notes and postcards which obviously had nothing to do with work, and suggested a tendency toward the banal. At regular intervals he would whisper things to Ann and I would hear her squeak, “Oh, Jörgen,” as if he’d told her a rude joke. There was something of an age gap between them. I estimated it to be at least ten years.

Beyond them sat John, a taciturn gentleman of about sixty, who worked on the financing of inspection visits, and next to him sat someone called Lisbeth, I think. I don’t know. I wasn’t about to ask. She hadn’t introduced herself.

There were twenty-three of us in total and almost all had a screen or little wall of some sort around their desks. Only Håkan and I were stuck in the middle of the floor. Håkan said we would soon be getting screens as well, but I said it didn’t matter.“I’ve got nothing to hide,” I said.

Eventually I found a rhythm in my fity-five-minute periods, and a certain fluency in my work. I made an effort to stick to my schedule and not allow myself to be disturbed in the middle of a period with either coffee breaks, small talk, telephone calls, or trips to the toilet. Occasionally I felt like going for a pee after five minutes, but always made sure I sat out the whole period. It was good for the soul, character-building, and obviously the relief of finally easing the pressure was that much greater.

There were two ways to get to the toilets. One, round the corner past the green potted palm, was slightly shorter than the other, but because I felt like a change that day, I decided to take the longer route past the lift. That was when I stepped inside the room for the first time.

Congrats to Heidi S., Venus M., Kim J., Amy B., Brandi K., and 95 other members of the Read It Forward community! Their entries were selected at random to win an Advance Reader’s Copy of The Room by Jonas Karlsson. 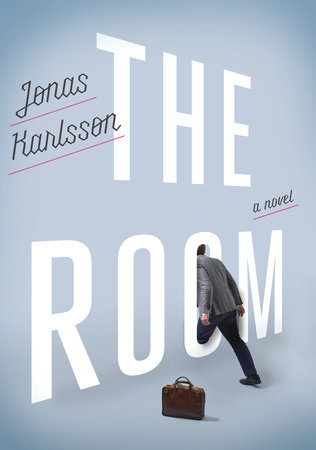 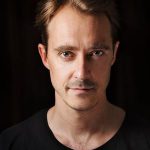 JONAS KARLSSON writes plays and short fiction. One of Sweden's most prominent actors, Karlsson has performed on Sweden's premier stage and in several acclaimed feature films and television series. In 2005, Karlsson made his debut as a playwright, earning rave reviews from audience and critics alike. Spurred by the joy of writing for the stage, Karlsson began writing fiction.

JONAS KARLSSON writes plays and short fiction. One of Sweden’s most prominent actors, Karlsson has performed on Sweden’s premier stage and in several acclaimed feature films and television series. In 2005, Karlsson made his debut as a playwright, earning rave reviews from audience and critics alike. Spurred by the joy of writing for the stage, Karlsson began writing fiction.