Start Reading If I Fall, If I Die

If I Fall, If I Die has been called "a death-defying coming-of-age story." What's your favorite coming-of-age novel? Tell us in the comments!

The boy stepped Outside, and he did not die.

He was not riddled with arrows, his hair did not spring into flame, and his breath did not crush his lungs like spent grocery bags. His eyeballs did not sizzle in their sockets, and his heart’s pistons did not seize. No barbarian lopped his head into a blood-soggy wicker basket, and no glinting ninja stars were zinged into his throat. Actually, incredibly: nothing happened—no immolation, no blood-bath, no spontaneous asphyxiation, no tide of shivery terror crashing upon the shore of his heart—not even a trace of his mother’s Black Lagoon in his breath.

Somehow Will was calm.

The day’s bronzy light, shredded by a copse of birch, tossed a billion luminous knife blades onto the front lawn. And he dared to continue down the walk— where he’d watched hundreds of delivery men stride to their house bearing fresh food for them to eat and new clothes for them to wear—with the paving stones granular and toilet-bowl cool under his naked feet. Venturing out into the unreal arena of his front yard for the first time in his memory, he discovered only early summer crispness in the air—this Outside air— its breeze slaloming through the jagged wisps of his cut-off shorts, in and out of the straps of his Helmet. Will had felt this same air sweep through the window in New York on those rare occasions he opened it, despite how it worried his mother, but something was sapped when it came through. He’d never immersed himself this way, not since his memory got impressionistic and gauzy as if it had been transcribed by a stenographer in full Black Lagoon.

Will was Outside because he’d heard an odd bang while painting a six-foot masterpiece his mother had commissioned for London, a composition she twice in passing compared to Mark Rothko, who was a genius painter, just like him. At first he’d thought another bird had struck the big picture window in Cairo. Will once watched a blue jay—he’d identified it with the bird book he used as a drawing reference—palsying there in the ochre dirt beneath the glass, its neck canted grimly as though trying to watch an upsidedown film. Blood rimmed its eyes and its beak was shattered like an egg ready to be peeled. It had thought it would go for a nice flitter through Cairo, over the burnt-orange velour loveseat, through the high, bright cavern of the hallway where Will’s masterpieces were hung, past dim London with its ravine of bookshelves and credenza display of his sculptures, over the staircase with its twin railings she’d installed on either side (for safety), and pick off some food scraps around the slow cooker in Paris. Had its mother never warned it about glass? Will had wondered, sitting there fogging the window until the creature finally stilled and Will startled himself with a sob, both of pity, and of thankfulness for their safety Inside. Nothing ever died in their house— except for bugs, lightbulbs, and batteries. Outside, however, was another story.

Though his mother feared pets, other creatures had more successfully entered their home. He’d found trickles of ants in the basement, mouse turds peppering the pantry, and crews of flies sprinting across the windows. Rogue moths snuck through the door when Will opened it for deliverymen, their wings powdery and fragrant like the makeup that sat unused on his mother’s long teak dresser in San Francisco. He’d cup the moths in his hands, feel their desperate clatter between his palms, then cast them through the only unscreened window in Venice.

Sometimes people had come. Once the furnace was repaired by an ancient man who smelled of pastrami and wood smoke. And for a time the paperboy would leave his strange, grubby shoes by the front door and play LEGO with Will on the carpet in Cairo. At first it was thrilling, until Will noticed the older boy’s proclivity for breathing exclusively through his too-small nose and building only uninspired bunkerish structures, mixing colors together like an architectural test pattern. After a few weeks, Will stopped answering the door when he knocked, telling his mother that he didn’t need friends because he was an artistic genius. “Don’t toot your own horn,” she’d said, smiling.

Of course he’d considered going Outside thousands of times— as he’d considered executing a standing double backflip or walking around with his feet magnetized to the ceiling or chainsawing a trapdoor in the floor—but had never dared. Even when he lobbed their garbage bags as far to the curb as he could manage from the front foyer, or watched shirtless neighborhood boys plow their BMXs through the meaty summer heat, he’d never been sufficiently tempted. Mailmen over the years had asked why he and his mother were always home, and Will often replied, “Why are you a mailman?” with one raised eyebrow, which usually shut them up.

The real reason was that he was her protector. Her guardian. From herself. From it: the Black Lagoon. It wasn’t like he was trapped. The doors were not locked. She made no rules, issued no commandments, decreed no penalties, and exacted no punishments.

Staying Inside was something he’d invented, intuited, for her sake, to keep her from falling so deep she’d tremble and explode and weep all her tears and go dry and insubstantial as the dandelion fluff that occasionally coasted Inside like tiny satellites. He’d always known that if fear took her for good, he’d be left treading water forever in the ocean of life with nothing to buoy him.

But birds usually made a different sound against the window, more sickening and soft, like a strike from those plush drumsticks used in marching bands, not the sharper bang he’d heard. In a gust of curiosity, Will had set down the fan brush he was using to texture a block of mustardy- green acrylic paint, then removed his smock and slipped out the front door as easily as entering a long- neglected wing of their house. He hadn’t actually expected catastrophe, or a bloodbath, but with little to compare to, hadn’t ruled them out either. Wordlessly she’d taught him that the Outside was built of danger, of slicing edges and crushing weights, of piercing needle-points and pummeling drop-offs, of an unrelenting potential for suffocation, electrocution, mayhem, and harm. So today a generous portion of him was left mutely astonished that, so far anyway, the Outside was nearly pleasant.

Thrilling himself with his own daring, Will moved now from the concrete out into the grass, grotesquely alive beneath his feet— a carpet made of salad that he half-expected to grip his toes and hold him fast. Luckily, his Helmet would safeguard him if he tripped or a branch dropped lethally from above. After some painfully prickly searching in the cedar bushes, he found it, the source of the bang: a husk of charred matter that resembled a tiny exploded wasp nest, smoking faintly like the humidifier his mother put in his room in the winter. The dirt was blackened around it, the air charred and sulfurous, and it occurred to Will this was some kind of bomb.

Now he glimpsed a figure dart around the side of the house, boy shaped, something heavy looped over his shoulders, and Will wondered if he’d been hurt somehow by the explosion. Will followed him around the corner, passing the strange dryer vent fuming with the startling Inside smell of fabric softener and warmed clothes, their clothes, and had just rounded the rear of his house when he toppled, a nuclear drill of pain boring between his temples, masterpiece film of neon spindles whirling through his eyelids. Some diminished part of his mind registered a demonic shrieking, and he realized then that the noise was being squeezed from his own lungs. Desperately, he shaped the sound into an anguished plea for his mother but knew she couldn’t hear him with her Relaxation Headphones on. Amid the murk of agony he gathered the sense that something had struck his forehead and fallen to his feet. He tore open his eyelids. A purple crystal. The sun dazzled it before Will’s vision was again welded shut, this time a stickiness there. Still moaning, he bent, felt for it in the grass, and closed his hand around the rock.

“You’ll be fine,” a nearby voice said.

Congrats to Gerald G., Gina F., Rhea W., Jazmin W., Anne H., and 95 other members of the Read It Forward community! Their entries were selected at random to win an Advance Reader’s Copy of If I Fall, If I Die by Michael Christie. 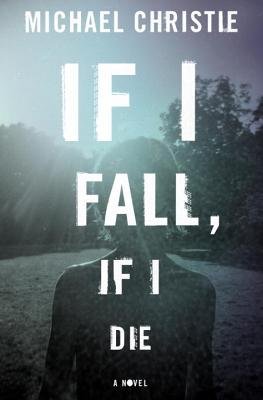 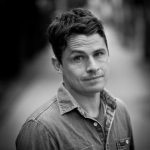 MICHAEL CHRISTIE's debut book of fiction, The Beggar's Garden, was longlisted for the Scotiabank Giller Prize, a finalist for the Writers' Trust Prize for Fiction, and won the Vancouver Book Award. Prior to earning an MFA from the University of British Columbia, he was a sponsored skateboarder and travelled throughout the world skateboarding and writing for skateboard magazines. Born in Thunder Bay, he now lives on Galiano Island with his wife and two sons. If I Fall, If I Die is his first novel. Visit him online at MichaelChristie.net.

MICHAEL CHRISTIE‘s debut book of fiction, The Beggar’s Garden, was longlisted for the Scotiabank Giller Prize, a finalist for the Writers’ Trust Prize for Fiction, and won the Vancouver Book Award. Prior to earning an MFA from the University of British Columbia, he was a sponsored skateboarder and travelled throughout the world skateboarding and writing for skateboard magazines. Born in Thunder Bay, he now lives on Galiano Island with his wife and two sons. If I Fall, If I Die is his first novel. Visit him online at MichaelChristie.net.