“On the Scary Mother Spectrum, My Character is an 8 out of 10”

Josephine’s main torture implement is her mind. She’s got a witchy way of making her mental suggestions come true.

By Koren Zailckas • 7 years ago

Read It Forward: You’ve written two memoirs, and have talked about how your personal life informed some of the circumstances of the Hurst family in Mother, Mother. What was the transition from non-fiction to fiction like? How much of your past writing process found its way into the novel?

Koren Zailckas: The concept of writing fiction used to be scary.

With memoir, there’s a little less mystery to the process. It’s thematic. You’re writing about one aspect of your life and you have the distinct advantage of knowing what the finished product looks like.

I’d liken memoir to putting together an Ikea desk, but it’s probably more like dissembling the damn thing, then putting it back together minus the instruction book. If you’re lucky, you find connections between things. You realize how some experiences in life primed you for others–why Character Defect A (say, coming from a difficult family) slotted so nicely into Experience B (crippling teenage binge drinking). The memoir-writing process can be frustrating at times, but there’s security in knowing the whole thing fit together in real life, so by god, there’s got to be a way to make it work on the page.

When I was writing Mother, Mother, the process felt a lot more magical and elastic than that. If I had to compare it to anything, it was more like baking bread. I had a sense of what I wanted the story to look like, but the Hursts took on a life of their own too. Some devoured others the way yeast eats sugar.

I’ve since realized in fiction, as in bread baking, you’re really only adding ingredients (characters, conflict) in the first third of the process. After that, it’s more about letting what you have ferment and rise, stretching it out, shaping it as best you can. Some characters, Will especially, were like springy dough. No matter how hard I tried to mold him something else, he always popped back into the person he wanted to be.

RIF: There is a lot of talk in our culture about motherhood – whether women should have children at all, when they should have them, and how they should raise their families the “right” way. Josephine is a terrifying matriarch, but where do you think she falls on the spectrum of “bad mothers”? How can her children be expected to cope with her behavior?

KZ: On the scary mother spectrum, I think Josephine is almost as bad as it gets. Maybe she’s an eight out of ten. I’ll spare her the indignity of being the worst of the worst, only because there’s not a lot of physical abuse. There’s no horrific outward manifestation of neglect: Jo doesn’t lock Will up, Flowers In the Attic-style.

But Jo does confine her kids. She does put them in a cage, in terms of character and identity. Josephine either worships or demonizes children. In her mind, they’re either all good or all bad, with no shades of gray in between.

Josephine’s main torture implement is her mind. She’s got a witchy way of making her mental suggestions come true. It’s kind of like she dreams through other people, and she relies on her family to feel her emotions for her. She picks a role for her children, and they find themselves playing the part: “The Performer” (Rose); “The Creature of High Intelligence” (Will); “The Needy One” (Will, again); “The Saboteur” (Violet). Really, these are things Jo aspires to, or else they’re the parts of herself she isn’t willing to face.

I’m still not certain how Will and Violet can better cope with Josephine. Sure, they could try to set more boundaries with her. They could try not to take her behavior personally. They could avoid dealing with her unless they have witnesses and an escape route. But with mothers as malignant as Josephine, I think most people end up mirroring the monster (i.e. going through life the same way Jo does) or running away. Still others, end up dead through drinking, drugs, or other self-induced disasters. How’s that for happily ever after?

Sadly, I think Will and Violet are in for a lifetime of therapy. If only they could bill it to their parents. 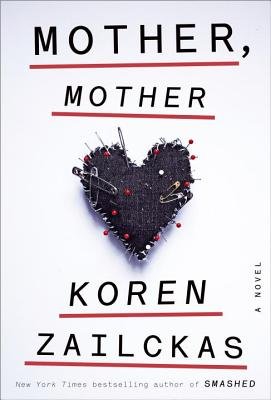 KOREN ZAILCKAS is an internationally bestselling writer, and has contributed to The Guardian, U.S. News & World Report, Glamour, Jane, and Seventeen magazine. She currently lives with her family in the Catskills mountains of New York. Visit the author online at KorenZailckas.com

KOREN ZAILCKAS is an internationally bestselling writer, and has contributed to The Guardian, U.S. News & World Report, Glamour, Jane, and Seventeen magazine. She currently lives with her family in the Catskills mountains of New York. Visit the author online at KorenZailckas.com