Recollections of Life in Paris

Artist Sylvie Covey recalls her favorite things about The City of Light.

By SYLVIE COVEY • 5 years ago 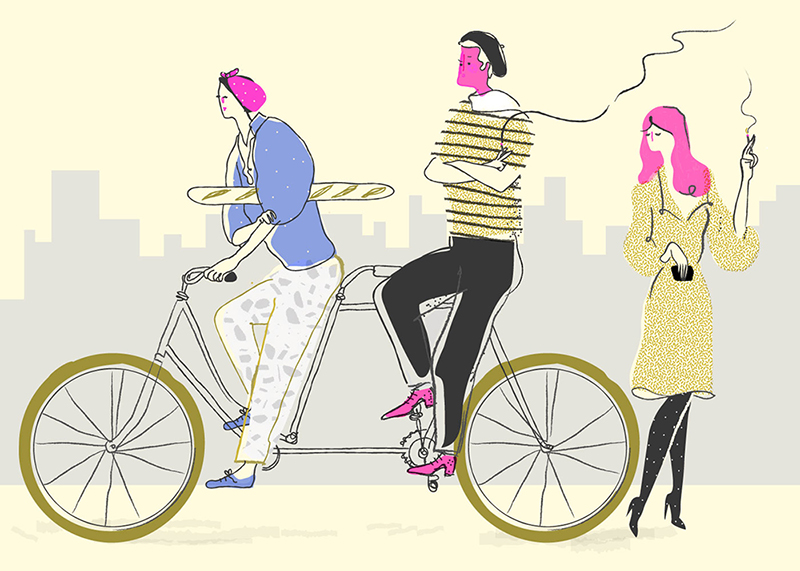 I was born in Paris, France and grew up in a green and lovely suburb of the City of Lights. I met the boy who would become my first French lover in high school. He was born a triplet, and I felt lucky to know these three identical and very entertaining brothers, Yves, Alain and Joel. We all joined a local youth club, and for years we went camping, rock climbing, sailing and exploring numerous areas, including sneaking one night in the Catacombs, the tunnels running in the bowels of Paris.

Eventually, I fell in love with Yves, of the aforementioned three brothers. He is an artist, and we both attended the École Nationale Supérieure des Arts Décoratifs in Paris. Besides studying art, I wrote poetry, and also took nude drawing classes at the Atelier de la Ville de Paris on the Place des Vosges. To support myself in college, I became a model for painters and photographers. I modeled in all the famous art studios in Paris, such as Les Beaux Arts and the Académie de la Grande Chaumière, and met numerous artists.

Years went by, I journeyed around the world, and later immigrated to the United States, but still I kept in touch with the friends of my youth. I see Yves twice a year when I revisit my hometown of Paris. We walk along the Canal Saint-Martin, or go to my favorite museum, le Musée d’Orsay. Recently, we saw a great exhibit by a number of the turn of the century artists who depicted the world of prostitution. Amongst the paintings, there were funny little sex movies with ladies of the night in costumes of that era, and men with large moustaches.

“Riding a bike is very French; it is a common sight to see businessmen in suits and French women wearing couture riding a bike or a vespa.”

We go to lunch in the Museum; there is a great dining room with chandeliers and ceilings painted like in Versailles, and large windows opening on the courtyard. We order fine wine with our delicious entrées. French food is usually simple, yet refined. The produce, the water and the flour used to make bread, as well as the temperature of the oven all make a difference: everything counts.

Yves rides his bicycle everywhere. Riding a bike is very French; it is a common sight to see businessmen in suits and French women wearing couture riding a bike or a vespa. Riding at night especially is magical, crossing the Pont des Arts with the lights reflecting on the Seine River. One feels carefree and romantic, walking toward the Île de la Cité, savoring a crepe, or sharing a kiss.

When I visit Paris, I stay at my girlfriend Danielle’s place, on rue Rambuteau, in the Marais area, near the Centre Pompidou. I’ve known Danielle since we were 18 years old. We met in the Latin Quarter, where we went dancing in the Caveaux de la Huchette—an underground jazz club. We both have red hair and we could pass for sisters. Danielle is the quintessential French woman; she is striking with her flaming red hair and elegant silhouette. Men do double takes and turn to watch her walk in the streets. If I were to kiss a woman, she would be it.

Danielle is the best-dressed woman in Paris. Her favorite designer is Thierry Mugler. She carefully chooses a different outfit and shoes everyday. She buys couture dresses online or in vide-greniers (secondhand shops), and shares them with me. Just recently she found me a vintage Jean Patou long silk dress. Most of my closet is filled with couture dresses from Danielle.

Recently, we went to see the Jean Paul Gaultier retrospective at the Grand Palais. It was an astonishing show of art and fashion that left us mesmerized and transported. Afterwards, we walked on the rue du Faubourg Saint-Honoré to check the couture houses that line the street, especially Christian Dior, who carries the lace undergarments we favor, before sitting for a couple of hours in the Jardin des Tuileries, enjoying the sun and conversing with one another and with interesting passersby.

Danielle and I often go to lunch at a favorite café in the Marais, “La Chaise au Plafond,” where we sit on the terrace under the trees. She brings her little dog; he snoops under her chair. Danielle orders a “tartine beurre” (a sliced baguette with butter) and coffee. I order a full lunch, the “plat du jour,” and wine. Sitting in a café is an important activity in France. We stay sometimes for hours, while friends come and go all afternoon and visit with us.

“April is special in Paris. All the flowers are in full bloom. The architecture and the gardens convey a sense of sophistication and elegance that is incomparable to anywhere else.”

Later, we go home and rest, before going out again at night for dinner. Life is pleasant in Paris. At night near Notre Dame, musicians and rollerbladers play and ride. On Friday nights, hundreds of rollerbladers roam through the city together and create havoc in the traffic. It is fun to watch them being so free and fearless.

April is special in Paris. All the flowers are in full bloom. The architecture and the gardens convey a sense of sophistication and elegance that is incomparable to anywhere else.

I take a train one hour south of Paris, to go home to visit my mom. She lives in a small village, in a big old house where my grandfather was born, built in 1830. The house has stayed in our family over time. There is a large property, dotted with ancient trees, a chicken house with five chickens, and a vegetable garden. My mom makes jams from her fruit trees and cooks superb meals. One of my favorites is blood sausage with apples.

When my dad was alive, he collected wine. We have a real wine cellar. At some point, we had over two thousand bottles, now just a few hundred. My dad would buy cases from the wine makers, and keep it in the cellar for years. Then, instinctually, he would know when it was time to drink it. This is a real science, to know which wine has matured, from its origins and year. His favorite was Châteauneuf-du-Pape. At dinner, we always had a grand wine that would have cost hundreds of Euros in a restaurant. Today, my brother and I look after the cellar.

Sylvie Covey’s latest book, Modern Printmaking: A Guide to Traditional and Digital Techniques, is a fully illustrated instructional printmaking book that presents step-by-step examples alongside representative works from thirty top contemporary printmaking artists. The craft of printmaking is flourishing in the modern era, appealing to both traditional artists as well as those interested in graphic design and digital techniques and this all-in-one guide is both technical and inspirational. 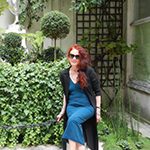 SYLVIE COVEY was born in France and studied graphic arts at the École Nationale Supérieure des Arts Décoratifs in Paris. She has taught digital and photo techniques in printmaking at the Fashion Institute of Technology in New York since 2001 and has been an instructor at the Art Students League of New York since 1995. Her work has been exhibited throughout Europe, Asia, and North and South America and has been acquired by major museums and institutions. She lives in New York City.