My Years in Provence

One author finds that starting over in the south of France isn't exactly as Mayle described it.

By MIRANDA RICHMOND MOUILLOT • 5 years ago 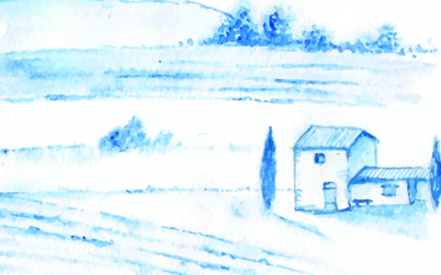 It is safe to say that starting a new life on the European continent, particularly in an old house, is a literary genre of its own. Indeed, since a certain English gentleman chose to write about twelve months of his life in a certain corner of France, it’s bloomed into a sort of pan-cultural archetype. It spread to the movies with films like Chocolat, which added Johnny Depp and confectionery to the mix; not a bad idea, I feel. You are, I am sure, familiar with what I call the Mayle Literary Cycle: the protagonist, real or fictional, moves to a European country (usually southern), introduces us to a certain number of quaint rural types, eats a lot of good meals, and learns that life really is better when it contains quantities of red wine, olive oil, goat cheese, and—depending on the author—love, sweet love. Now I am certainly in favor of red wine, olive oil, goat cheese, and sweet love, in approximately equal amounts, which is to say, lots. But I didn’t come to Alba for any of that. In fact, twelve years ago, when I arrived, I often wondered why I had come here, trying to write a book about my grandparents and their mysterious, war-torn marriage in a decrepit stone house in an isolated medieval hamlet on the northern edge of the south of France. But even here, whenever I spoke of my project, someone, more often than not, was likely to respond excitedly, “Mais oui! Comme Peter Mayle!”

The stone house that featured in my personal year in Provence (which as of now has been going for more than a decade) was probably the last thing my grandparents ever agreed on, a dream unrealized, a repository for their frustrated love story and wartime secrets. A month after they bought it, they left it: my grandfather’s work with the United Nations transferred the family to New York. They planned to return as soon as possible, but instead, a few years later, my grandparents separated and never spoke again. Neither ever moved back to France. The house remained where they left it; my grandfather made a few stabs at restoration and then abandoned it again. I came back to the village to try and save it, and to uncover at least a portion of their mysterious past. I also moved here because I hoped that returning to France might settle something in my family’s blood that had been unsettled since the summer of 1940, when my grandfather was discharged from the French Army with no citizenship papers and my grandmother was forced to abandon her work as a physician because they were Jews, and France had, inexplicably, turned against them. My grandparents fled France for Switzerland in the winter of 1942. Crossing back over the border to France after the war to purchase this house in the Ardèche was a kind of score-one-for-hope enterprise. My move here in 2004 was, too.

Now, although my grandfather’s restorations had resulted in some vital elements like a roof and indoor plumbing, when I arrived in 2004 to begin the adventure that became A Fifty-Year Silence, the house was still basically a wreck. But as soon as the phrase “house in the south of France” crossed my lips in conversation, everyone—from my dental hygienist back in North Carolina to my first literary agent—conjured Mayle-esque visions of leisurely dinners, bustling markets, wine barrels, and sunny fields full of sunflowers and lavender. I could talk ’til I was blue in the face about the dead scorpions in the bidet; the filthy, half-finished rooms; the creepy cellars…it all fell on deaf ears. Oh the mistral? Try spending the night in a house that has had cold blown into its stones by six months of that damn wind, I’d grumble, watching as my interlocutors shut their eyes and imagined the Tuscan sun. Try lying in the dark and listening to the half-dry river creak in its bed, thinking morbidly about how many generations of ghosts can fit into eight hundred year-old walls. Nothing doing: the water lapping in Peter Mayle’s stone swimming pool drowned me out. Try paying for house repairs on a writer’s budget, I’d persist, and then sigh with resigned frustration as my listeners sniffed the air for truffles and almond blossoms and fondly pictured all the things I must be learning about life and love as I skipped through the vineyards.

Of course they were not wrong. The first months of my own year in Provence taught me many lessons about life and love, starting with this one: if you leave a window unshuttered for forty years, as my grandfather did, someone, eventually, will come along and smash it. My first night in the house I learned that I did not love shattered glass, petrified spiders’ egg-cases, dead leaves, or the special kind of dust that accumulates on very elderly cobwebs. I did quickly become numb to such trifles as I learned lesson number two, which is, there’s a reason they call it stone-cold. If you are wondering how many layers of clothing you will need for a sojourn in a medieval house with no glass in the windows, the answer is seven. Which takes the sting out of discovering the ancient gas water heater is broken, because who wants to remove all those for a shower anyway? Best build a fire instead, which brings us to lesson number three: check any firewood you may locate in the cellar. That may look like a woodpile to you, but the big hairy spiders and four-inch-long centipedes who call it home are not going to be one bit pleased when you disrupt their condo association meeting. Never fear, for if you follow lesson number four you’ll already have a broom handy for swatting at these creatures, because you know how you learned in grade school that most stones are made of dirt that has been pressed together for billions of years? What this means is that medieval stone houses are actually made of dirt. Peter Mayle said you can never be bored living in the French countryside, and I am here to tell you this is because anything seems exciting after you’ve swept your stone floor a hundred and forty-seven times. Speaking of Mr. Mayle, I should have paid attention to the man himself for lesson number five, for he had a successful career and a solid income before he moved into a house in the south of France. I advise you to follow his lead. I was an impoverished twenty-two year-old on a writing grant when I came here, and although it seemed lavish when it was awarded to me, it shrank alarmingly every time I got near a hardware store.

Lest you think I’m complaining, though, let me be clear: I would not have traded that first year for a whole swimming pool full of goat cheese. And for all the Mayle fans out there (and I am definitely one of them), I shall conclude with a big YES: ambling up to the market on Sunday morning and then walking back home with a basket full of good things to eat was—and still is—part of what made it all worthwhile. But only part. The rest of it—all the scary and awful and ridiculous and hopeful bits, when I didn’t know where I’d find the money to buy a back door that shut securely; when I fell off the side of the terrace trying to get the weeds out of the stone retaining walls; when my ninety year-old grandfather wept with rage as he told me that my ninety-two year-old grandmother, who left him fifty years ago, was still trying to ruin his life; when I met and married the stonemason who finally helped me install that door—those are the things worth living, and worth telling. 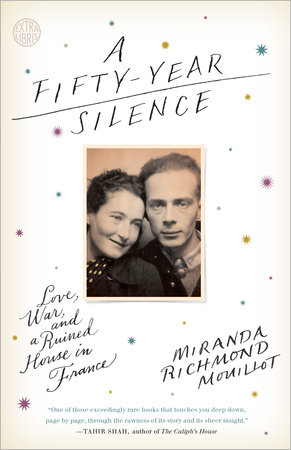 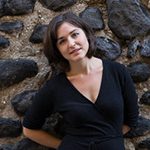 MIRANDA RICHMOND MOUILLOT was born in Asheville, North Carolina. She lives in the South of France with her family.

MIRANDA RICHMOND MOUILLOT was born in Asheville, North Carolina. She lives in the South of France with her family.