My Character Refused To Do What I Told Her To Do

As a writer, I’m always thrilled when a character shows up in my head, demanding that I write a story about her.

By Maddie Dawson, author of The Opposite of Maybe • 7 years ago

(Mostly it’s women who initially come knocking at my brain’s door, but I’ve noticed that they quickly bring along some men, usually the men who are giving them the troubles they need me to write down.)

It was no different when Rosie Kelley showed up one night.

She woke me up to tell me that she was forty-four years old, she was pretty sure she was pregnant for the first time, and the grandmother who raised her might be dying, and she was breaking up with the guy who got her pregnant because he wanted to move across country—and well, she’d just realized she wasn’t ready to move away with a man who was perhaps a little bit selfish. (Maybe a lot selfish!)

News like this makes me bolt upright in the bed and go off looking for my laptop. The sun was just coming up as I typed up the complicated facts of Rosie’s life: an orphan, unmarried, never really lived the life she wanted, 15-year relationship with a nerdy man who collects teacups . . . and on and on.

Believe me, I wouldn’t have gotten up if she’d just been one of those whiny types. I hate whiners! Over the next few days, I discovered she was funny and irreverent and completely unprepared for the life that had just reached up and chosen her. She had depth and empathy and also she was scared out of her mind, which always fascinates me about people.

I quickly decided I knew how things were going to turn out in this book. I went to work every day, typing up the story, weaving in subplots that showed up, (thank you, subplots), and enjoying the details of Rosie’s agonies and ecstasies. I had sex scenes and food scenes and people dancing in the living room and cheating at Scrabble and fighting and making up…and then one day I got close to the end of the book and the bottom fell out.

Rosie refused to do what I thought she and I had agreed that she would do. It wouldn’t work, she said. It would, I told her.

And then she said: No way.

My friends argued with me, pointing out that it was MY book, that Rosie wasn’t—you know, really real—and urging me to write the book the way I thought it should be. So I tried that, and it didn’t work. Fell flat.

I guess the point is that you breathe life into these characters who show up and agree to talk to you, and then—just like with the real humans you raised—there comes a time when you have to listen to them.

We read to be intrigued, delighted, and to find out what happens next—and sometimes, it turns out, writers are just as surprised as readers by what our characters decide to do. 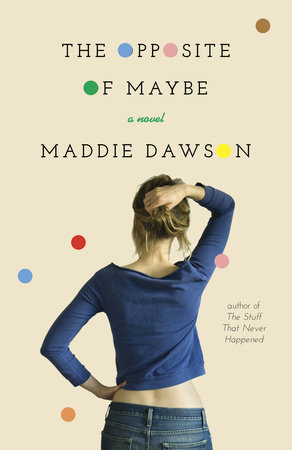 MADDIE DAWSON is the author of The Stuff That Never Happened and The Opposite of Maybe. She lives in Connecticut. Visit her online at MaddieDawson.com.

About Maddie Dawson, author of The Opposite of Maybe

MADDIE DAWSON is the author of The Stuff That Never Happened and The Opposite of Maybe. She lives in Connecticut. Visit her online at MaddieDawson.com.