How Libraries Affirm Our Humanity 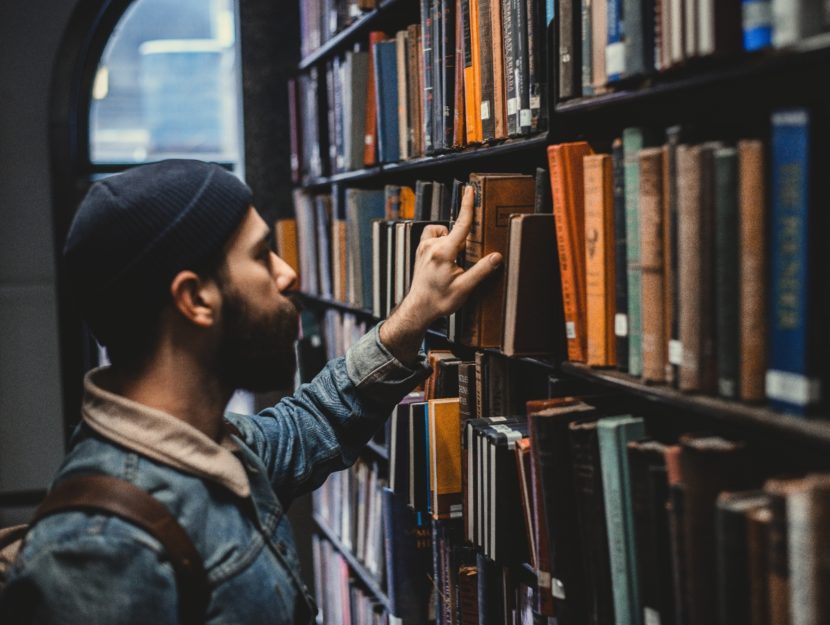 I don’t know who decided there should be a rainbow outside the doors of Russell Library in the weather-beaten New England town where I grew up. The rainbow itself was nothing spectacular—just a few sheets of metal cut into arches and soldered together, with metal strips for steps. But when I was seven, I’d leap out of the car and tear toward that rainbow, my kid-sized tote bag of books over my shoulder, and clamber to the top. It felt like climbing straight up into the sky. From my perch I’d look out over imaginary clouds, My Little Ponies prancing through them, like the ones strewn on our living room floor at home. It was 1987.

Returning to my hometown after years away, one of the first things I wanted to do was visit the library to see if the rainbow was still there. Driving up, I saw it. Its colors were faded and it looked decidedly diminutive compared to when I was a kid. In my memory, it had a technicolor vibrancy. Standing next to it now, the rainbow came up to my my chin. I placed a hand on the painted metal in gratitude.

“My” rainbow, as I thought of it, felt like it was meant especially for me. And if I was allowed to climb up a statue at this building’s entrance, the books inside must be for me, too. In the library, I wandered shelves that were exactly my height, hid away in secret, unseen corners, and fell into the bright world of a picture book. I even had my own library card, with my name printed on it—not my parents’.

Sometimes I wandered past the video collection and snuck into the grownup stacks. They towered high above me, wedged full of books that were intimidatingly wide and heavy. When I slid one out and let it fall open in my lap, it was dense with small writing and long, unfamiliar words. The internet didn’t exist, and the world was populated with mysteries. If I read every book in the library, I wondered, would I find answers to all the world’s questions? How could I ever read all of this?

These days, knowledge is easier to come by. Wisdom, however, still eludes us.

The Free Public Library, as it turns out, holds a particular place at the center of American history and culture. In my 20s, I lived for a while in the Netherlands, where—surrounded by the babble of an unfamiliar language—I sought out a familiar place: the library. At the desk, filling out my paperwork, I learned that each book cost a small fee.

“It’s not free?” I questioned my Dutch boyfriend later, incredulous.

“It’s just a very small amount. Ten cents for a week? Just a token,” he explained, taken aback by my visceral reaction.

“It has to be totally free!” I half-shouted, incensed. “Everyone should be able to take out books, even if they’re penniless!”

It had never occurred to me that there could be libraries that weren’t free. But it’s how they started off in our nation, when Benjamin Franklin founded the Library Company of Philadelphia in 1732, a subscription library stocked with books “suited to the tastes and pursues of young tradesmen.” It wasn’t until 1839 that the Boston Free Public Library was founded, inspired—curiously—by a French ventriloquist. Even then, it was 13 more years before a philanthropist making a major gift would assert that the library should be “free to all.”

The word “free” carries a particular connotation for me, a Lutheran pastor. My faith is rooted in a theological understanding, first professed by Martin Luther, that the love and grace of God does not need to be earned or deserved, but is free. In Luther’s time, as in ours, the religious landscape was imbued with the notion that it’s up to us to earn God’s favor. Lutheran thought wipes clean the cosmic tally board and proclaims that no one’s keeping track. I was a convert to the denomination later in life, and this idea came as a great shock. You mean, we don’t have to earn it? By being good? Or doing good? Or getting good grades? Or going to confession? Or avoiding impure thoughts? Or…

“Nope,” comes the Lutheran answer. “You’re a big mess and you’re also completely beloved. Just deal with it. You don’t have to earn anything. It’s called grace.”

The church I served in Brooklyn, New York, lived out this “free grace” every time we gathered. We worshipped around a dinner table, where anyone who walked through the door was welcome to be part of cooking and eating a meal. That meal was free. And though we welcomed offerings at the end of worship for anyone who cared to give, from our welcome at the door to the invitation to do dishes, the message was: this is for you, and it’s free.

In our society, free things are often suspect. Living in Brooklyn, I’d see furniture put out on the curb. Often, it had a piece of lined notebook paper slapped on with duct tape, capital letters reading “FREE!” There had to be a catch. Often that catch was bedbugs. Online there’s a lot of free stuff, be it apps or email services. They’re high quality but offered in exchange for tacit complicity as our data is quietly siphoned away. Free things often have a hidden price.

Libraries, however, have no catch. They seek not to commodify us, to use us, or to research us. Despite constant budget cuts, they’ve endured. Libraries remain, like a subconscious memory of our nation’s best intentions. Libraries only seek to honor us.

At the library, those who are uninvited to board meetings or galas can find a place. Kids who are still writing their 3’s backward get a card with their name on it. The guy who slept at the shelter last night can use the bathroom or check his email or, if he should desire, page through Sophocles, Joyce, or Angelou. Grandparents on a fixed income can check out all the mystery books they like. Every time we walk in the doors, a world of books is open to us, even those the world thinks they’re wasted on.

Libraries stand quietly, remembering a truth that our nation has lost sight of in the frantic sprint toward wealth and dominance: there are some things every soul should have access to. A set of human rights. A table laid with food. And all the mysteries of the world, compressed between dusty covers. We’re tumbling toward a future in which our worth is based only on what we can earn, produce, or affect. Libraries are a beacon, signaling that every person has inherent worth. It is a notion that is becoming increasingly countercultural, and yet, to me, the truth I consistently return to as a pastor and a citizen. I like to think that’s what I learned at Russell Library, standing at the top of that rainbow, gazing across imaginary clouds. This place was meant for me, but only inasmuch as it was meant for everyone. 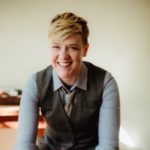 Emily M. D. Scott founded St. Lydia’s Dinner Church, a progressive, LGBTQ+-affirming congregation in Brooklyn, New York, where worship takes place around the dinner table. A Lutheran pastor (ELCA), Scott is a graduate of Yale Divinity School and the Institute of Sacred Music. Her writing has appeared in The New York Times, and her work at St. Lydia’s, which sparked a wider Dinner Church movement, has been featured in The Wall Street Journal and The Atlantic. After serving eight years at St. Lydia’s, Scott is now creating a new church community, Dreams and Visions, in Baltimore, Maryland.