A celebration of famous female writers who serve as wise guides for personal reflection.

By TAISIA KITAISKAIA • 1 year ago 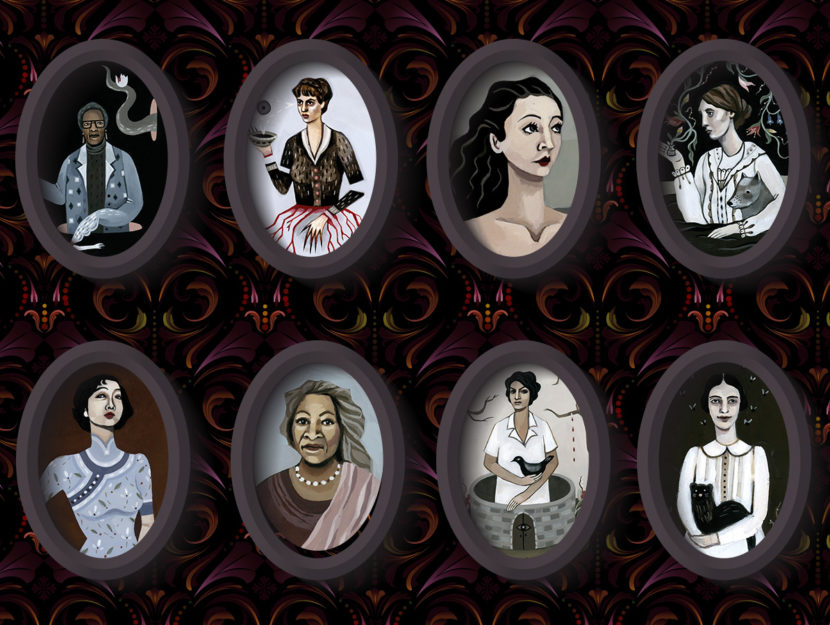 I’ve always loved the figure of the witch: how imaginatively she transforms the world, how good she feels being alone, how the mysteries are hers to play with. The realization that my favorite writers share these same qualities led to Literary Witches: A Celebration of Magical Women Writers, my book with artist Katy Horan, which portrays writers as witches through Katy’s gorgeous paintings and my surreal vignettes. The book’s imagery and ideas also led to The Literary Witches Oracle, a tarot-like divination deck where the authors serve as wise guides for personal reflection. Here are just a few of the extraordinary presences you’ll find in our Oracle. 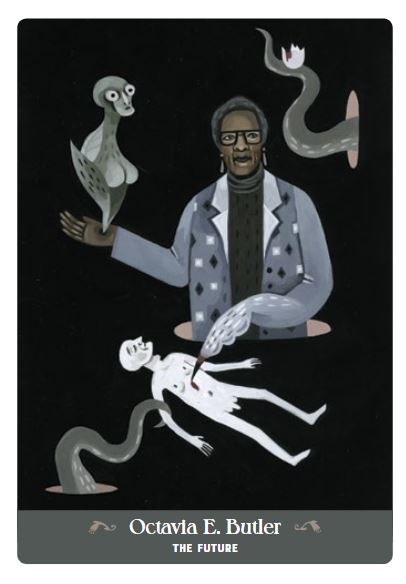 One of the very first black women science fiction writers, Octavia E. Butler represents The Future both for her speculative novels—which extrapolate racial, gender-based, and even interspecies tensions into apocalyptic and extraterrestrial scenarios—and for the gains her success represents. Born to a low-income family in California, Butler took odd jobs to support her writing. Her creative vision could be grim, but the ground Butler broke gave hope for a literary future with more incredible women writers of color. Imagining, planning, and worrying about the future are all possible readings when Butler shows in an Oracle reading. 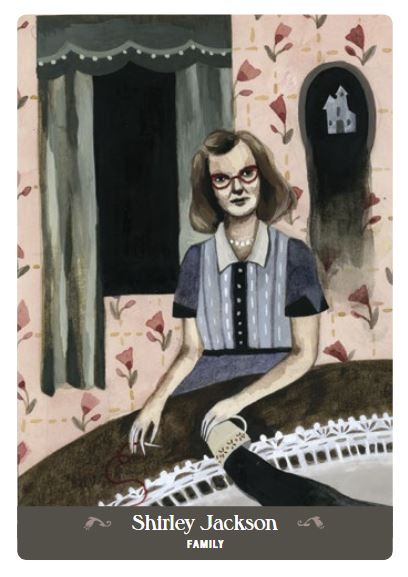 Author of well-known works like “The Lottery,” The Haunting of Hill House, and We Have Always Lived in the Castle, Shirley Jackson was also a wife and mother to four children, and her fiction is all about the domestic. Yet the oddly split personality in her work is intriguing: she wrote comic essays about chaotic family life on one hand, and dark novels and stories about stonings, hauntings, and sinister girls on the other. Altogether, her sharp, stylish, and haunted writing has made a major contribution to American literature. Jackson’s card in the deck addresses the pains and pleasures of the domestic. 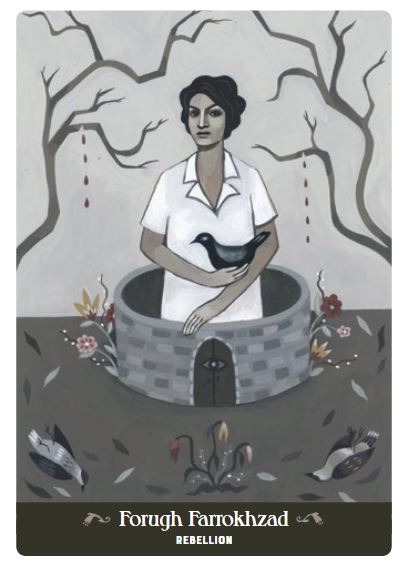 Iranian poet Forugh Farrokhzad broke a number of cultural taboos in her rather short life: she got divorced, wrote directly about sexuality, and openly kept lovers. She also left behind a body of tender love poems, a documentary film, and a son she adopted from a leper colony. Her deviations from the norm brought her a great deal of hostile criticism, but she stuck with remarkable resilience to her values. Farrokhzad’s card invokes independence, isolation, and barriers. 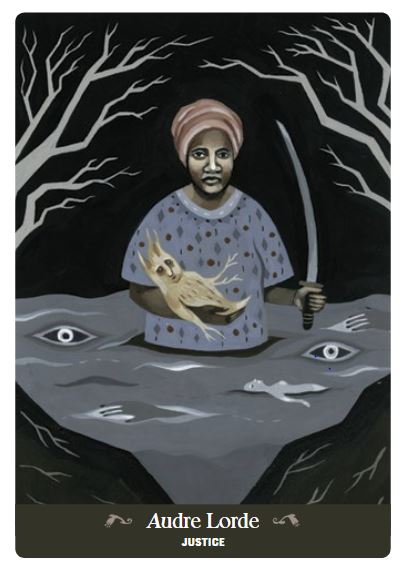 The poetry, essays, and activism of Audre Lorde, a loud and proud black lesbian feminist born in New York, feel freshly relevant for our times. Lorde’s writing and organizing of the 1970s and 1980s, which focused on fighting and surviving racism, sexism, and homophobia, continue to inspire and resonate. Her poetry’s witchy aesthetic is a reminder of the political import of the witch, her subversiveness and power. Drawing Audre Lorde’s card is an indication to stand up for the well-being of yourself and others. 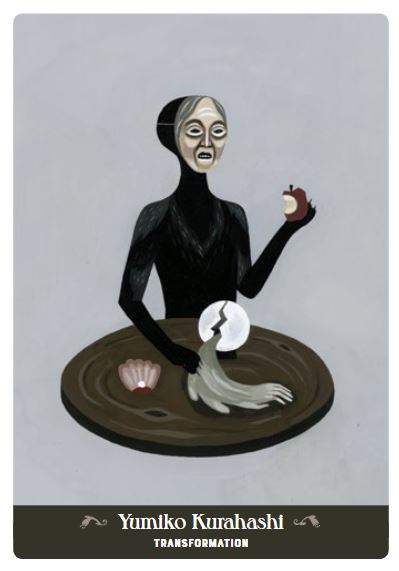 Experimental Yumiko Kurahashi is the most obscure author in the deck, and one of our favorites. Her stories, written in Japanese and influenced by European literature, are some of the strangest you’ll ever read: identity-altering witch masks, amorous cat-humans, and flying heads are just a few of the lurking curiosities. Nothing is what it seems in Kurahashi’s twisted fairy tales, and with reality and the self always in transformation, Kurahashi’s psychological insights are both humorous and horrifying. Her place in the deck asks the reader to reflect on masks, becoming, and play. 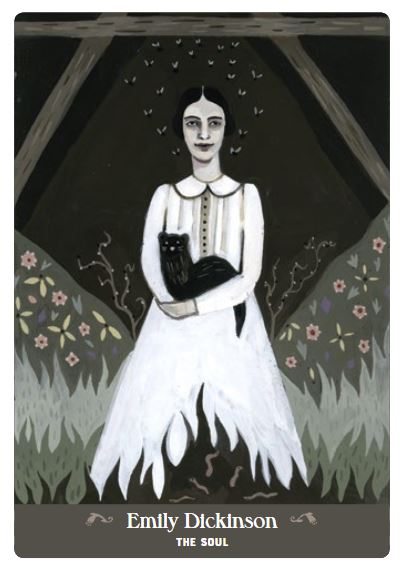 Puritan Emily Dickinson might seem like an odd presence in a coven, but her originality and breathtaking wildness of her poetry more than qualify this world-famous poet for witchery. Dickinson personifies The Soul: an unwavering, eerily precise attention to and articulation of the inner life. Often depicted as a recluse, Dickinson loved others deeply but rejected a conventional social calendar to focus on her idiosyncratic spirituality and creativity. Her presence in the deck nudges the reader to tend to the core of life. 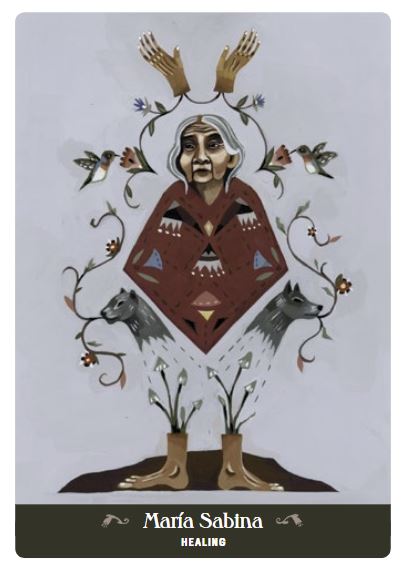 María Sabina, the greatest shaman-poet or Wise One (chota cijne) of the indigenous Mazatec people of southern Mexico, composed orally while performing psilocybin mushroom healing ceremonies. Sabina’s chants carried poetry’s original intent: to connect to the divine, to transform the actual world, to work as a literal spell. We’re lucky that a few of her appropriately psychedelic poems, full of imagery from Mazatec beliefs and Catholicism, have been recorded and written down. Sabina’s appearance in a spread may indicate that some healing is in order. 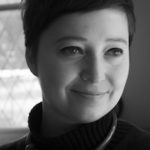 TAISIA KITAISKAIA is a Russian-American poet and writer. She is the author of The Nightgown and Other Poems (Deep Vellum, 2020); Literary Witches (Hachette/Seal, 2017), a collaboration with artist Katy Horan celebrating magical women writers and an NPR Best Book of 2017; a divination deck, The Literary Witches Oracle (Clarkson Potter, 2019); and two Ask Baba Yaga books of experimental advice from a witch of Russian folklore.