Life at Two Speeds: A Parisian View of America

A Frenchwoman in the U.S. reflects on the two cultures she straddles.

By Laure Dugas • 5 years ago 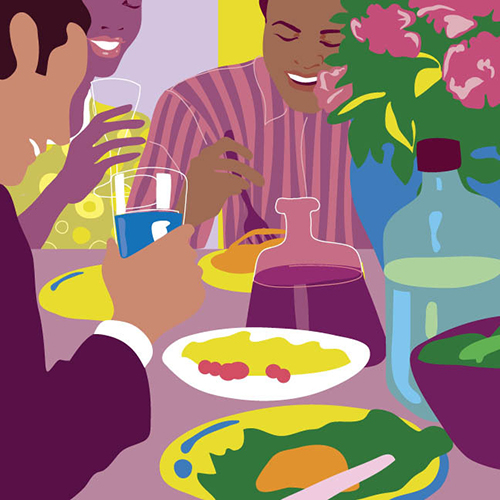 Food is always the first place to start when talking about the differences between Paris, where I grew up, and New York City, where living for a few years changed my life. The subject has been written about many times, how serious the French take their food and drink, how much Americans have to learn about French cooking and French eating and French everything. But I knew none of this when I first began living in New York as a Frenchwoman in her twenties, there to sell my uncle’s wine. It’s often like this: you cannot see your own culture clearly until you are taken out of it. So the first time I went out to dinner with my new friends in New York’s East Village was a shock, and only then did I realize what everyone takes for granted as the French attitude toward dining.

I should say first that things are always changing; the rules about what is “French” and what is “American” are lines that shift even if it’s hard to see in the moment. From my vantage point, I can see French culture receiving little injections of what could be considered American—the pace of life, at least in Paris; the way of doing business; even snacking between meals, which the French never used to do. As a Parisian who feels a little American herself, I may be doing my own small part. I believe in blending. In life, as in wine, it’s frequently an improvement.

But about that early New York dining experience: first, we were a party of five but the restaurant would not seat us until everyone had arrived. This may be more specific to a bustling place like New York than everywhere in the U.S., but it does not happen at all in France. Let me explain a little. At the time of this writing, my husband and I have just opened a restaurant in Paris (come visit us! It is called La Table de l’Ébéniste), and downstairs we have a lovely table that seats ten people. No matter how many guests arrive first, we always seat them. In fact, an evening will often look like this: two people show up promptly and sit to talk and drink wine; a half-hour later another two of their party show up to join them, and maybe they order food; more time passes before another two come, making six; then another; then by the time it is ten o’clock at night, the final two arrive, just as the first two finish their dessert. This arrangement can occupy the entire evening. Not so in New York—only two hours into our dinner, the server came to tell us we had to leave because the next party was waiting for their table. I thought I was on another planet.

I had heard New York was loud and fast-paced, but I always pictured this rush has happening on the outside—a sea of New Yorkers shouting while walking on the Manhattan sidewalks, yellow taxis swerving and honking constantly. I didn’t know it was the same thing inside as well: restaurants where you can barely hear yourself speak, plates whisked away when you’ve only just taken the last bite. The speediness applied to social situations as well. In Paris, as in France generally, friendships develop slowly. You can meet many times before beginning to express your affection for one another. It is perhaps a more accurate reflection of intimacy, which moves slower than simple curiosity or attraction. So I was utterly bewildered by New York socialization. A girl I’d only just met was already saying, “Oh Laure, I love your dress, I love your hair, can I call you ‘sweetie’? I love you so much, you’re so funny! Can we go to brunch tomorrow? We must go to brunch!” But then she never called me. A French person would always call.

But I am more pointing out differences here than making complaints. Life in New York was a strange and new experience for me but not a bad one—the furthest from it. American exuberance is unique to this world, and powerful. It can be the saving grace in what is often an unforgiving and too-fast culture. When I was traveling the country on behalf of my uncle’s wine, I was young and inexperienced and didn’t always know what I was doing. And yet, nearly everyone I met on the road was supportive and positive. “Great job!” I heard again and again. Americans may take for granted how powerful that simple phrase can be, that it is not something you hear in other countries. Even the almost-friends who praised me but didn’t call—even they put a little smile in my heart. A small lie, in other words, can be good for the confidence. In France, when an acquaintance asks how you are doing, a common reply is to say ça va, which is like saying “fine.” It’s neutral. But can you imagine if a neutral reply were the standard every time Americans asked after each other? The society would come undone!

If I had not learned a little of what it means to be American, if I had not ingested something of the American spirit, I would not be where I am today. I could not have opened my wine bar in Paris, when everyone was skeptical, or worse: “Are you sure you can do this? You’re a woman!” Even while I was preparing to open the third l’Ébéniste, passers-by would show excitement, but just as often doubt: “Eh, you are getting ahead of yourself,” or “what makes you think this one will work out, too?” The French are wary of new things; it comes with an old and proud culture. Americans are endlessly striving toward the new. I wish to embrace the best of both: like a Bordeaux wine made of merlot and cabernet sauvignon grapes. The cabernet provides austerity, depth, and takes its time to develop and show itself (like the French), while the merlot brings fruit, youth, and expressivity right away (like Americans). In harmony, the two qualities complement each other and make for a better wine.

But especially now, as the mother of a young child and with a business to take care of, I can easily lose sight of that harmony, and I have to remember to regain it. Days go by when I can hardly remember standing still. Then a favorite winemaker comes to town, visiting from the south—these are people who think about little else than working the land, the grapes, who measure time by seasons, whose livelihood depends on weather they cannot control. They join me in my bar and we open a bottle—the product of their efforts—and talk, and I lose track of the minutes, and then the hours, and learn to take my time again. Buy The Book
LAURE DUGAS was born in Paris to a family of winemakers and has worked for some of the biggest names in champagne. After three years in New York City, she moved back across the Atlantic to open a wine bar and store in the Batignolles neighborhood of Paris. L’Ébéniste du Vin was such a success that a year later Laure and her husband opened an oyster bar next door to it, then opened another restaurant in early 2016. Laure Dugas lives with her husband and daughter in Paris.

LAURE DUGAS was born in Paris to a family of winemakers and has worked for some of the biggest names in champagne. After three years in New York City, she moved back across the Atlantic to open a wine bar and store in the Batignolles neighborhood of Paris. L’Ébéniste du Vin was such a success that a year later Laure and her husband opened an oyster bar next door to it, then opened another restaurant in early 2016. Laure Dugas lives with her husband and daughter in Paris.