Kazuo Ishiguro on His (Movie and Music ) Influences

Do you know about any of your favorite authors' influences? Let's trade some fun author trivia in the comments!

We love learning about an author’s influences. What films do they watch? What music do these listen to? Here, Kazuro Ishiguro talks about the influences that impacted his writing of The Remains of the Day* (which he wrote in four weeks, amazingly).

“In the mid-70s, as a teenager, I’d seen a film called The Conversation, a thriller directed by Francis Ford Coppola. In it Gene Hackman plays a freelance surveillance expert, the go-to man for people who want other people’s conversations secretly taped. Hackman fanatically wants to be the finest in his field – “the greatest bugger in America” – but becomes steadily haunted by the idea that the tapes he gives to his powerful clients may lead to dark consequences, including murder. I believe the Hackman character was an early model for Stevens the butler.

I thought I’d finished Remains, but then one evening heard Tom Waits singing his song ‘Ruby’s Arms.’ It’s a ballad about a soldier leaving his lover sleeping in the early hours to go away on a train. Nothing unusual in that. But the song is sung in the voice of a rough American hobo type utterly unaccustomed to wearing his emotions on his sleeve. And there comes a moment, when the singer declares his heart is breaking, that’s almost unbearably moving because of the tension between the sentiment itself and the huge resistance that’s obviously been overcome to utter it.

Waits sings the line with cathartic magnificence, and you feel a lifetime of tough-guy stoicism crumbling in the face of overwhelming sadness. I heard this and reversed a decision I’d made, that Stevens would remain emotionally buttoned up right to the bitter end. I decided that at just one point – which I’d have to choose very carefully – his rigid defence would crack, and a hitherto concealed tragic romanticism would be glimpsed.”

Congrats to Shelley P., Kevin K., Kathleen W., Kathleen J., Sharon H., and 20 other members of the Read It Forward community! Their entries were selected at random to win an Advance Reader’s Copy of The Buried Giant by Kazuo Ishiguro. 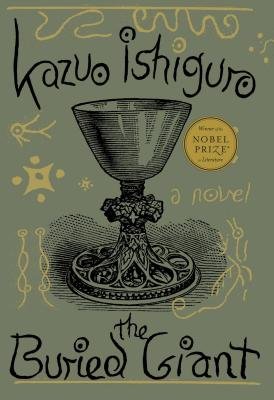 KAZUO ISHIGURO's seven previous books have won him wide renown and numerous honors. His work has been translated into more than forty languages. Both The Remains of the Day and Never Let Me Go have more than 1,000,000 copies in print across platforms, and both were adapted into highly acclaimed films.

KAZUO ISHIGURO‘s seven previous books have won him wide renown and numerous honors. His work has been translated into more than forty languages. Both The Remains of the Day and Never Let Me Go have more than 1,000,000 copies in print across platforms, and both were adapted into highly acclaimed films.