By Chip Heath and Dan Heath, authors of Decisive • 8 years ago

Our normal habit, in life, is to develop a quick belief about a situation and then seek out information that bolsters our belief. And that problematic habit, called the “confirmation bias,” is the second villain of decision-making.

Here’s a typical study from the research literature: Smokers in the 1960s, back when the medical research on the harms of smoking was less clear, were more likely to express interest in reading an article headlined “Smoking Does Not Lead to Lung Cancer” than one with the headline “Smoking Leads to Lung Cancer.”

Researchers have found this result again and again. When people have the opportunity to collect information from the world, they are more likely to select information that supports their pre-existing attitudes, beliefs, and actions. Political partisans seek out media outlets that support their side but will rarely challenge their beliefs by seeking out the other side’s perspective.

At work and in life, we often pretend that we want truth when we’re really seeking reassurance: “Do these jeans make me look fat?” “What did you think of my poem?” These questions do not crave honest answers.

The tricky thing about the confirmation bias is that it can look very scientific. After all, we’re collecting data. Dan Lovallo, a decision-making researcher, said, “Confirmation bias is probably the single biggest problem in business, because even the most sophisticated people get it wrong. People go out and they’re collecting the data, and they don’t realize they’re cooking the books.”

We can’t think our way out of the problems of narrow framing and the confirmation bias. Being aware of these biases does not cure them, any more than knowing you’re near-sighted helps you to see better. But adopting the right process—a process that spurs us to generate more options, and a process that compels us to challenge our assumptions—can provide guardrails that guide us toward wiser, more confident decisions.

This excerpt is based on Chip Heath and Dan Heath’s upcoming book, Decisive, available from Crown Business wherever books are sold on March 26th, 2013. To read more about making better decisions, you can visit the authors’ website, HeathBrothers.com.

Read Part I of How to Make Better Decisions and learn about the first “villain” of decision-making: “Narrow Framing.” 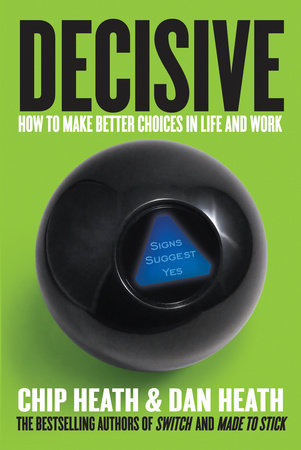 The Heath brothers are the bestselling authors of Made to Stick and Switch.  CHIP HEATH is a professor at the Graduate School of Business at Stanford University. He lives in Los Gatos, California. DAN HEATH is a senior fellow at Duke University's Center for the Advancement of Social Entrepreneurship (CASE). He lives in Raleigh, North Carolina.

About Chip Heath and Dan Heath, authors of Decisive

The Heath brothers are the bestselling authors of Made to Stick and Switch.  CHIP HEATH is a professor at the Graduate School of Business at Stanford University. He lives in Los Gatos, California. DAN HEATH is a senior fellow at Duke University’s Center for the Advancement of Social Entrepreneurship (CASE). He lives in Raleigh, North Carolina.