How an Evening Out with Friends Inspired My Novel

Inspiration can strike when you least expect it.

By MATTHEW NORMAN • 9 months ago

Of all the questions I get from readers, I’m most often asked about what inspired my books. This makes sense, because beginnings are exciting, right? People love a good origin story.

Unfortunately, for my first two novels, Domestic Violets and We’re All Damaged, I’ve never had terribly satisfying answers. I’ve resisted the urge over the years to come up with something harrowing, and I’ve instead opted for the boring truth. Both of those books arrived in my head in the tiniest forms imaginable. If I’m being whimsical, I think of them as snowflakes that fell to the ground and started rolling. They picked up other snowflakes along the way, until they were eventually something that looked like an idea for a book.

This wasn’t the case at all for my latest novel, Last Couple Standing. Sticking with the wintry analogy, my third book showed up fully formed and packed tightly. A big, wet snowball to the face…but in the best possible way.

Like Jessica and Mitch Butler, the main characters in Last Couple Standing, my wife and I are part of long-established group of couple friends. This real-life group is much larger than Jessica and Mitch’s group, and it doesn’t go all the way back to college like theirs, but it’s every bit as legit. In the book, I describe the fictional group as “a big, sprawling, man-made modern American family.” Well, I could’ve just as easily been talking about my friends and me.

We all left our hometowns—either for school, jobs, or adventure—and found ourselves here, in Baltimore, Maryland. We became friends in our mid-twenties, when we were carefree idiots with all the time in the world. We coupled up around the same time, got married, and had kids. We became adults. Some of us lost a startling amount of hair.

Several years ago, I was out for dinner and drinks with a few of the husbands from our group. Typical guys’ night. Someone who one of us knew from work had recently split with his wife, so the subject of divorce came up. At that point, none of us had been divorced, so it felt like an abstract concept, like we were a table of English majors talking about whatever calculous is. We discussed the drama of it all and the complexity of the logistics—the division of assets and the sharing of children. And then my friend Mike asked, “What do you think would happen if one of us got divorced?”

A few drinks in, it was a sobering thought. We’d spent years happily talking about the same handful of subjects, like our jobs and kids and movies and sports. This, though… this was something new. For reasons I can’t explain, our minds immediately went to disaster. We came up with a scenario in which divorce becomes a sort of virus—scary and inescapable—like an even-worse version of what we’re all living through now. One divorce leads to another. And then another. Couples, now given permission to be reflective, each, in order, begin to admit that they, too, are unhappy. And then finally, the whole group is wiped out.

I know; this conversation sounds dire, doesn’t it? In truth, it wasn’t. The restaurant was loud. We were eating chicken wings and drinking. We joked about who would win custody of dogs and Netflix accounts. We dared my friend Joey to eat the hottest wings on the menu and then laughed when he appeared to start crying.

It wasn’t until the Uber ride home later that I realized the potential weight of what we’d been talking about. The part of my brain that writes novels can be a pessimistic bastard, and it started making some ominous points. Our marriages ending like tipped-over dominoes had sounded far-fetched at dinner. But, wasn’t that exactly how those same marriages had started: one after the other? If asked pointblank, any of us would say that we’d gotten married for all of the right reasons, like love and mutual devotion. But, what if it was more complicated than that? What if we’d instead gotten married because…well, because everyone else was doing it?

In bed that night, I should’ve been tired. I wasn’t, though. I didn’t realize it at the time, but I was working. A novelist needs to think beyond his or her own reality, and that’s quickly what I began to do. I stopped thinking about my wife and I, and about all of our real-life friends. Instead, I was thinking about people who didn’t exist. I was putting pretend couples together in my head, and then I was tearing them apart. Then I started thinking about one pretend couple in particular. I wondered what would happen if they found that their marriage was the only one left—that they were the last couple standing. I asked myself, what would they do to try to save what they had?

That sounded like the kind of novel that I wanted to write. I’m glad I went out that night. 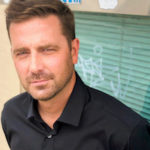 MATTHEW NORMAN lives in Baltimore, Maryland, with his wife and two children and holds an MFA from George Mason University. His previous novels include We’re All Damaged and Domestic Violets.