To find the most romantic spots in Paris, David Downie takes us off the beaten path.

By David Downie • 5 years ago 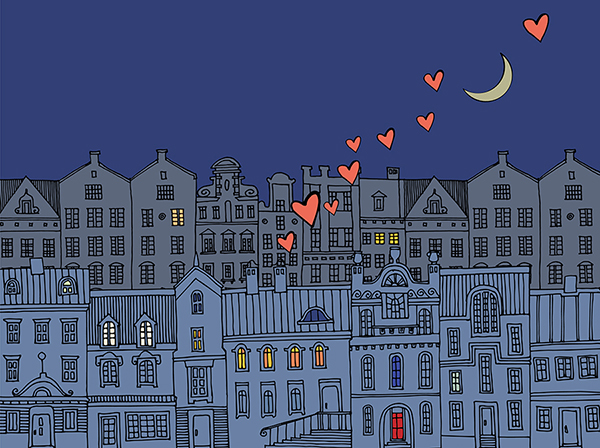 While perched at a sidewalk café on a sweeping boulevard or while walking with arms linked on the curving banks of the Seine, have you ever wondered whether “Paris, City of Light” ought to be “Paris, City of Love?”

The old nickname needs changing: it’s not bright lights that make Paris the standout. It’s the atmosphere you breathe.

What other modern mega-city has saved its historic heart like Paris? Where else does Europe’s most magical river flow, a blue-green eyebrow crossed by beautiful bridges?

“Beauty”—such an old-fashioned word—comes in unexpected flavors. When the Bateaux-Mouches cruise Paris at night, their spotlights pick out gilded interiors in Old Regime palaces—and legions of lovers dotting the quays.

Beyond the physical wonderfulness lie the intangibles. No other nation is more notorious for naughtiness, sex and luxurious style. No need to visit the Moulin Rouge to find scarlet. As Hollywood teaches, every Frenchwoman merges the wily charms of Madame de Pompadour and the angular beauty of Catherine Deneuve. Frenchmen are modern-day musketeers with the peacock-pluck of a d’Artagnan and the looks of the young Alain Delon.

Could at least some of this be true? Maybe, and if it’s all propaganda it doesn’t matter: millions everywhere are bent on believing Paris is the epicenter of romance. Even some native Parisians and longtime foreign residents are mesmerized by the myth, preferring it to nitty gritty reality.

Most Parisians I know find the real romance in places, things and people that don’t fit the globalized clichés. As in Rome, when in Paris, do as the Parisians do—explore and be brazen. Forget the selfies. Talk to strangers and stray.

For instance, skip the diamond-studded fashion spree on the Champs-Elysées and Place Vendôme and the champagne and oysters at a multiple Michelin-starred restaurant. Trolling Paris’ open markets, then feasting on the riverbanks might be more fun: farmstead cheese, a fresh-baked baguette, and a bottle of organic red Burgundy as the boats float by?

What do you think? The private limo and silver-tongued guide showing you the sights from behind smoked glass or a quiet ride on bikes across the Bois de Vincennes onto the banks of that other great Paris river, the Marne?

High-priced hedonism can be heavenly. But plenty of Parisians in the know also think intellectual pursuits are better. Smart is sexy: locals hang out in public libraries, museums and bookstores—good places to meet kindred spirits. Some still read low-tech print books making sure the cover is on display: poetry and philosophy are great bait.

Parisians go to edgy contemporary galleries with shocking shows and range beyond the confines of the Louvre and Musée d’Orsay. There is life before and after Impressionism, and about 150 other museums to see.

Romance blooms in some pretty unlikely locales: along the chaotic, multi-color streets of Belleville or Place d’Italie, for instance, or among the jasmine hedges on the Promenade Plantée—a linear park atop a former railway viaduct on the unfashionable east side of town. It makes New York’s High Line seem dinky and graceless. 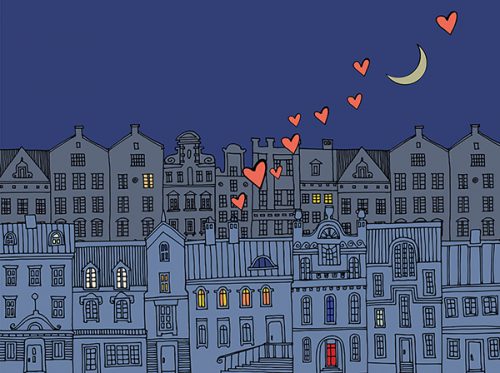 Did I say “unfashionable?” As Victor Hugo, the great Romantic who shaped Paris nearly 200 years ago said, “Ugly is beautiful.” To be unfashionable is fashionable. Ask any Parisian trendsetter: don’t follow, lead

To me, one of the city’s great heart-stimulating spots is an inconspicuous knoll by a circular pond in the “Memory Garden” at the Bercy Park in eastern Paris. Minimalist fountains flow, hump-back bridges fly over a causeway, and half-ruined or restored wine warehouses from centuries past are shaded by giant sycamores. How many out-of-towners hang there?

At times, the loved-to-death Pont des Arts facing the Louvre is so crowded with newlyweds and padlock-hawkers that you can’t walk across it. The “love locks” spread no matter what the city does. Yet, the most striking contemporary suspension bridge in Paris is empty much of the time—and blissfully free of locks. It’s a half-hour walk upstream, between Bercy and the new National Library complex. No other footbridge I know mimics a strand of DNA. The views enfold the medieval towers of central Paris and the city’s busy beltway, with skyscrapers, smokestacks and lively, movie-set modernity. This is where Hollywood should film nowadays.

Speaking of movies, Paris still has over a hundred theaters showing classics from everywhere, not just blockbusters. Few cinemas anywhere are as fabulous as La Pagode, an 1896 landmark in unique Asian Art Nouveau style. Likewise, the ballet scene: nothing can upstage the Opéra Garnier, a masterpiece from the Second Empire still in use.

One place you don’t know about is the waterfall in a rocky grotto in the 18th-century Bagatelle Park edging the Bois de Boulogne. It’s more romantic than anything in central Paris. Ditto the crazy cascade at Buttes-Chaumont, landscaped in 1867. The hilly park also has a miniature Greco-Roman temple on a spur, high above a lake where local lovers row. A few blocks north, at the Bassin de la Villette, hipsters and oldsters toss boules together as barges splutter by—real working barges.

Connoisseurs of Paris know the true spiritual fountainheads of romance are the Great Romantics of the 1800s: Victor Hugo, Honoré de Balzac, Théophile Gautier, George Sand and her lovers Alfred de Musset and Frédéric Chopin. That’s why literature lovers hit the house museums honoring these heroes. Their poetry, plays, novels and music feed the soul of the City of Light and Love today.

Hugo and his longtime lover Juliette Drouet evoke the Marais and the 17th-century splendor of the Place des Vosges, a rendezvous created by the lustiest French king, Henri IV.

Balzac hid out in a secret garden on the edge of Passy. You can still sit where he sat among the flowering shrubs and plot passionate tales.

At the foot of Montmartre, the floorboards squeak and piano music plays as you wander through the studios and the bedrooms of the Museum of Romantic Life. Sand and Chopin spent happy days here. In the garden, the tea salon’s tables sit under tangled, fragrant vegetation.

It may not sound sexy, but the most moving romantic sites in this supremely romantic city are where the Romantics repose—for eternity. The tree-lined, looping cobbled lanes of Père-Lachaise, Montmartre and Montparnasse cemeteries are anything but lugubrious. Don’t be shocked to see those shameless Parisian couples among the tombstones. The Romantics of old would approve.

David Downie’s most recent book, A Passion for Paris: Romanticism and Romance in the City of Light, is available now in paperback. Click the cover below to learn more! 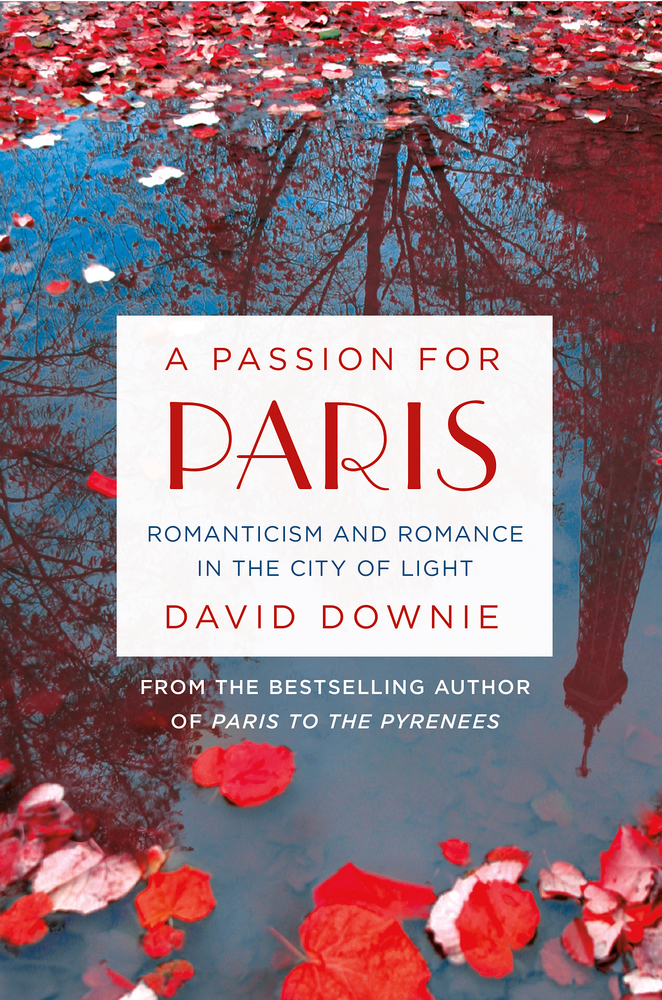 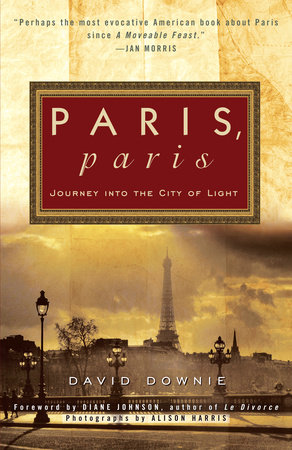 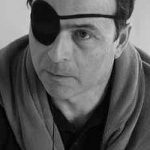 DAVID DOWNIE is an American journalist based in Paris since 1986. He has written about European culture, food and travel for magazines and newspapers worldwide. He was a Paris correspondent for Salon.com, Departures, Appellation, and Art & Antiques, and has contributed to epicurious.com, concierge.com and many other websites. Currently he is a European correspondent for Gadling.com, the popular literary travel site. The author of a dozen works of nonfiction and fiction, Downie’s writing has also appeared in many anthologies, among them The Collected Traveler Paris, Southwest France and Central Italy; Salon.com’s Wanderlust; Travelers’ Tales: Adventures in Wine Country; By The Seat of My Pants; and A Moveable Feast.

DAVID DOWNIE is an American journalist based in Paris since 1986. He has written about European culture, food and travel for magazines and newspapers worldwide. He was a Paris correspondent for Salon.com, Departures, Appellation, and Art & Antiques, and has contributed to epicurious.com, concierge.com and many other websites. Currently he is a European correspondent for Gadling.com, the popular literary travel site.

The author of a dozen works of nonfiction and fiction, Downie’s writing has also appeared in many anthologies, among them The Collected Traveler Paris, Southwest France and Central Italy; Salon.com’s Wanderlust; Travelers’ Tales: Adventures in Wine Country; By The Seat of My Pants; and A Moveable Feast.