Take a peek at the books that helped inform Elizabeth J. Church's novel All the Beautiful Girls.

By ELIZABETH J. CHURCH • 3 years ago 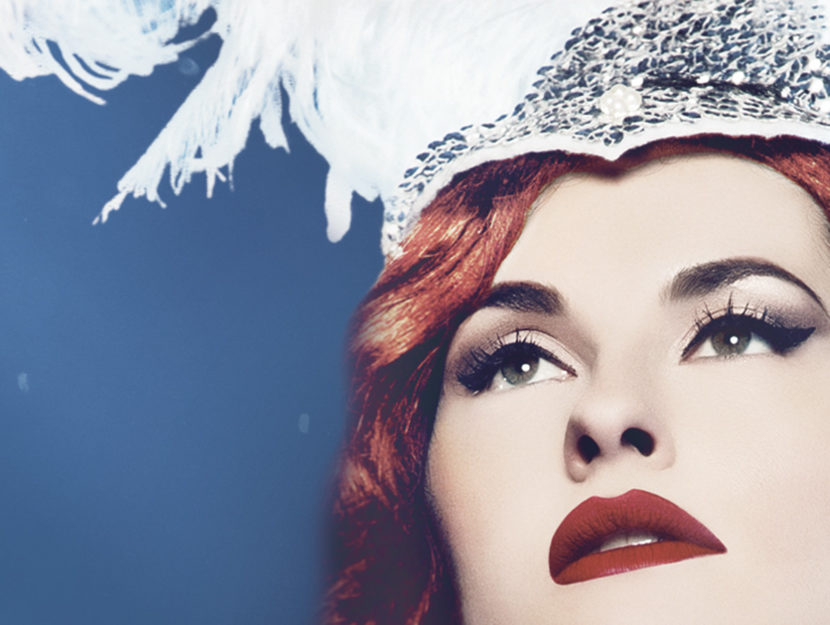 These are some of the books I bought when I began my research for All the Beautiful Girls, a powerful novel about a gutsy showgirl who tries to conquer her past amongst the glamour of 1960s Las Vegas—and finds unexpected fortune, friendship, and love. To create Lily and Ruby’s world, 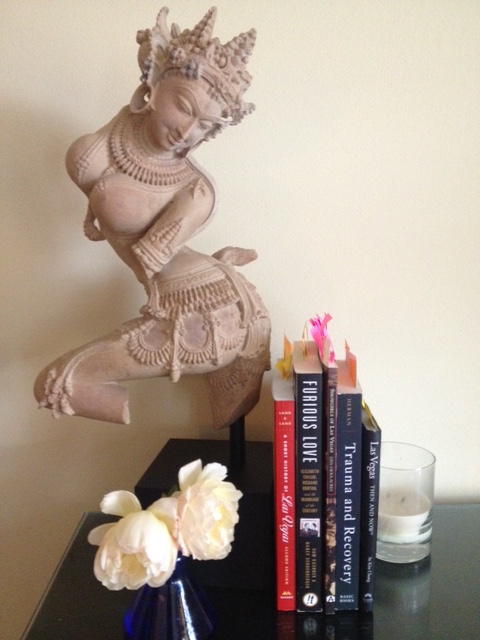 When I sold All the Beautiful Girls, I celebrated Lily and Ruby’s emergence by buying myself the statue pictured with these books. Representing a dancing celestial deity, she’s a replica of a 12-century Indian (Uttar Pradesh) piece owned by the Metropolitan Museum of Art.  I think of her as utterly feminine and joyful.

Click on the white dots in the close-up below to learn more about each title, and how it influenced the writing of All the Beautiful Girls. 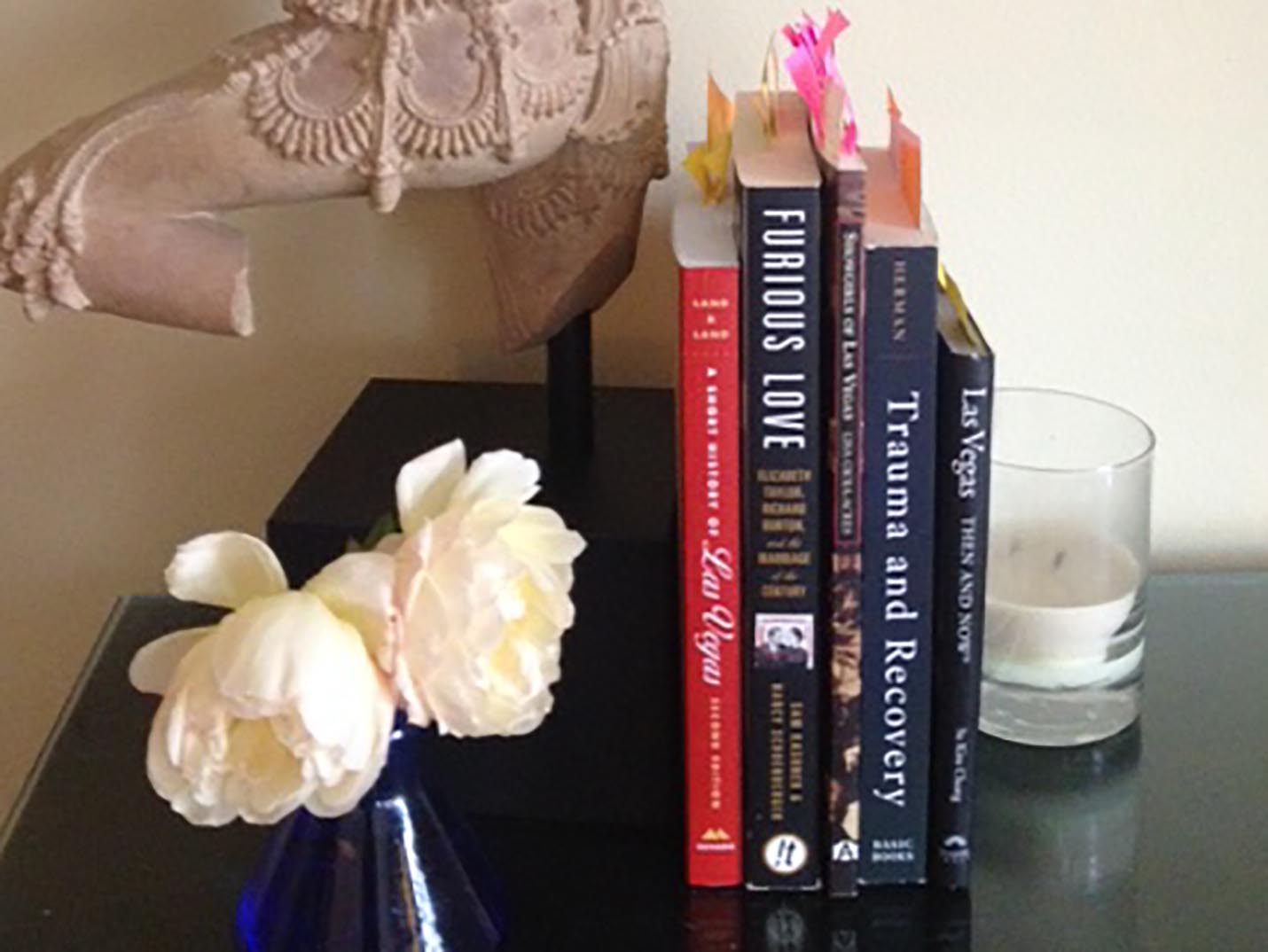 The account brings home the massive, pervasive effect that the combination of Dean Martin, Frank Sinatra, Sammy Davis, and Peter Lawford, had on the Strip and on America’s perceptions of the Las Vegas phenomenon. Historical context was important to me in fashioning Ruby’s world and helping her to navigate that world. Which celebrities would she have encountered and admired, and how was Vegas evolving from a dusty western town to an international draw? What did “real” life in Vegas look like? After all, an actual city underlies the glitz—there are teachers, nurses, doctors, lawyers, grocery clerks, and librarians, alongside stars like Elvis and Ruby Wilde.

Furious Love: Elizabeth Taylor, Richard Burton, and the Marriage of the Century by Sam Kashner and Nancy Schoenberger

No other couple better epitomizes the sixties—and the consequences of a surfeit of fame and money. Two famous people—one stunningly beautiful and the other a Welshman with a voice and delivery that mesmerized—who engaged in a passionate and public romance that scandalized: Who wouldn’t want to read about their affair? I was riveted by the outsized personalities, and their tumultuous stories helped me to think about how to portray excess—in the form of lavish gifts of jewelry, furs, expensive champagne, and even yachts (having myself never been on the receiving end of such largesse).

As may be obvious by the particularly thick population of Post-It notes feathering this book, I was enthralled. There are glorious photos of showgirl auditions, stage sets, performances, costumes, and publicity events, along with fascinating tidbits of showgirl history.  Behind-the-scenes photos reveal wardrobe mistresses and managers at work, masses of feathers and other accoutrements, featured showgirls, costume designers, and other showgirl big-wigs. This was the only source I found that revealed that there actually had been black showgirls performing at the first integrated casino, the Moulin Rouge. It opened in 1955 but was closed by the time Ruby began her Vegas adventures.

This book, and, in particular, a chapter on child abuse, gave me a solid foundation as I puzzled out the ways in which trauma and loss might impact the formation of personality. It helped me to consider how Lily’s behavior would be affected by the loss of her family and her uncle’s abuse, including what things she would do to alleviate her pain. Herman notes that “childhood abuse forces the development of extraordinary capacities, both creative and destructive.” I think Lily demonstrates those wildly divergent attributes through her dance, her choice of Javier, and, ultimately, her resilience.

Las Vegas Then and Now by Su Kim Chung

Filled with luscious images of Vegas, this book includes historical photos of showgirls and casinos, like the Dunes, that have since vanished. It helped me to see accurately on my time travels back to the sixties and even gave me a peek at neon displays and marquees advertising acts such as Johnny Carson, Connie Stevens, and Liberace. 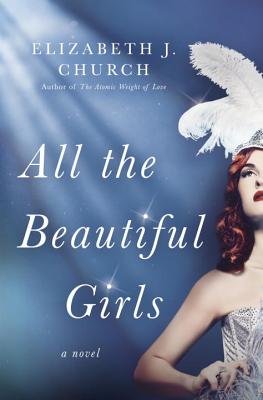 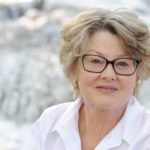 ELIZABETH J. CHURCH is the author of The Atomic Weight of Love. All the Beautiful Girls is her second novel. Ms. Church lives in northern New Mexico.

ELIZABETH J. CHURCH is the author of The Atomic Weight of Love. All the Beautiful Girls is her second novel. Ms. Church lives in northern New Mexico.