Based on the wildly popular Twitter feed Dear Girls Above Me, a roman à clef about how thinking like a couple of girls turned one single guy into a better man.

By Charlie McDowell, author of DEAR GIRLS ABOVE ME • 8 years ago

Relationships end every day. People find each other, they lose each other. The levels of devastation may vary, but it’s a right of passage for all of us.

This book isn’t about that. It’s about what happens after.

When my girlfriend abruptly ended our relationship over a casual lunch as carefree as she ordered her kale salad, I thought my life was over. I wasn’t thinking about how I was going to pick up the pieces and move on; I didn’t want to pick up any pieces and I certainly didn’t want to move on. But very soon after, I wanted to move out.

They say that when one door closes, another opens. For me, the door that opened was directly above me. No sooner than the day my relationship ended, two new, special, tenants moved into the unit directly above me. Two girls. Two girls who debated the merits of a guy bringing a condom on the first date:

“Is it weird how I’m offended that he expected it, but also impressed that he was prepared for it?” Such a complex cocktail of emotions going on right above me.

In the state that I was in, the last thing in the entire universe that I wanted to hear were two girls basically having their very own 24-hour slumber party. I was a fly on the wall. Trapped. Unable to leave.

Pretty soon a psychosis started to form; I began responding to them. They couldn’t hear me. So I was basically talking to myself. I admit now, it sounds crazy.

Eventually, though, I soon realized something. These girls, an annoyance at first, inadvertently began to help me get back out there. You see, my relationship was a long one. In the span of time I was in it, the dating landscape changed dramatically. Texting, Facebook, Instagram, the Kardashians. I was setting sail in uncharted waters. And these two girls actually became my captains.

In between discussions about which one of them is more of a “Carrie” from Sex and the City (neither, they’re both “Samanthas”) and season 3 of The Real Housewives, occasionally a gem of insight would emerge and it would be something I could take with me as I attempted to get back out there and date again.

I was like a government spy, deciphering code, weeding through their ridiculous conversations to get to the gold that could help me. In my post-relationship haze, these two girls and our one-sided conversations were all that I had. I went from wanting to stab knives into my ears to actually beginning to care about these girls. But I couldn’t let them know that I can hear them. That would ruin everything.

The girls above me were helping me more than anyone else I had in my life . . . . Only they didn’t know it.

Celebrity fan alert! Lena Dunham (creator of the HBO hit Girls) and Zach Galifianakis (break-out star of The Hangover films) are both fans of Dear Girls Above Me! Lena Dunham calls Charlie McDowell “the hapless, wit-soaked everyman who is attempting to bridge the gap between the sexes like a very skilled, and freaking funny, anthropologist of the Kardashian era.”

Get a sneak peek! Download an excerpt of Dear Girls Above Me by Charlie McDowell. 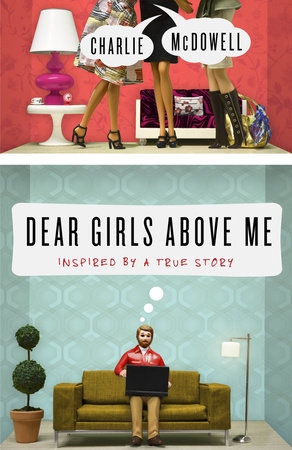 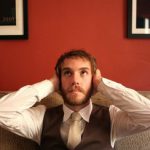 CHARLIE MCDOWELL is a comedy writer and filmmaker who studied directing at the American Film Institute. He owns his own production company, Cloudbreak Productions, and will direct his first feature film in the spring of 2013. Dear Girls Above Me will be available in paperback from Three Rivers Press wherever books are sold on June 4, 2013. Visit the author at DearGirlsAboveMe.com and check out the Twitter feed that started it all @charliemcdowell.

About Charlie McDowell, author of DEAR GIRLS ABOVE ME

CHARLIE MCDOWELL is a comedy writer and filmmaker who studied directing at the American Film Institute. He owns his own production company, Cloudbreak Productions, and will direct his first feature film in the spring of 2013. Dear Girls Above Me will be available in paperback from Three Rivers Press wherever books are sold on June 4, 2013. Visit the author at DearGirlsAboveMe.com and check out the Twitter feed that started it all @charliemcdowell.