Carving Out a Place to Write in Paris

Nadja Spiegelman retreats to Paris to work on her memoir about the intricacies of mother-daughter relationships—if only she could find a place to write.

By NADJA SPIEGELMAN • 5 years ago 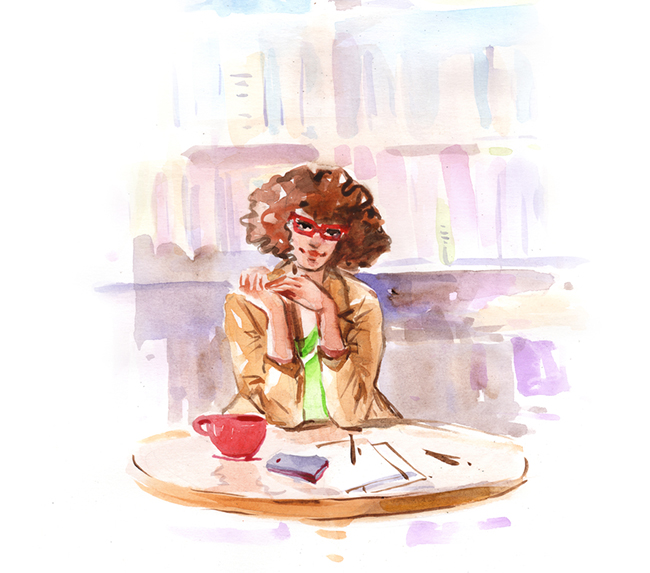 I had been to Paris often as a girl, on vacations to visit my mother’s family. Other Americans might swoon at the buttery croissants, the perfect foulards, the flower and cheese shops. But I knew Paris. Paris was shop-keepers who slapped children’s hands. Paris was sitting still for hours at the dinner table while my grandfather scolded me for using the wrong fork. It made me feel very French, to not love Paris.

Three years ago however, as I prepared to move from New York to Paris in order to write a book, I found myself suddenly awash with romantic visions. I imagined I would sit in the same chairs as Hemingway, be invited to join literary salons, stroll cobblestone streets that would leave me blinded with inspiration. I pictured myself at a round bistro table on a café terrace, an overflowing ashtray by my notebook, while French waiters gave me free café crèmes, simply because I was a regular, and they loved me. There was really no limit to my fantasies, no matter how much I told myself I knew better.

As soon as I arrived, I set about finding the café that would become my café. I settled on the closest one, on the corner: a large brasserie identical to all the others that lined the extra-wide Grand Boulevards. The street was a main axis, and the cafés along it catered to a high-turnover of tourists and businessmen on lunch breaks. The decor was black and modern and slick, the menu was printed in both English and French, and they served food at any hour of the day. Now that I have a better understanding of the nuances of French culture, I blush to think that I was ever naïve enough to believe this particular café could be mine. But the first few days, the waiters were friendly to me. They teased me when I stared into space too long and asked me to marry them. Everything was going smoothly. But on my fourth consecutive morning, the manager stopped me when I walked in. He told me, brusquely, that there were no free tables. It was 11 am and the place was empty. Even at the peak lunch hour, only a third of the tables here would be occupied. I looked around the quiet restaurant and asked again. The manager gestured me towards a high red stool at the bar. I told him that I needed a table for my laptop. No, he said. He needed his tables for real customers. I looked anxiously towards the waiters, but they now refused to meet my eyes. I protested that I was a real customer. I had ordered lunch the previous days and would today as well. The manager gave me a greasy smile and said, again, that the only available seat was at the bar. I threatened that I would go to one of the many other similar cafés on the street. “Voila!” he said, angrily. He put his hands on my lower back, and quite literally pushed me out the door.

I went home fighting the sting of tears and stayed there. It was a few weeks before I worked up the courage to try the other cafés on that busy street. When I did, they were no more welcoming. At 11:30, the waiters at every café set the tables for lunch. If I arrived earlier, at 11:30 they would ask me to move to a small cramped table in the back. If I arrived later, they glanced at my laptop bag and shook their heads. No room.

This was how I found myself in Starbucks. It wasn’t quite the romantic dream I had envisioned. But here, at least, I could stay for hours, nursing the same cup of coffee. The baristas learned my name. I took the same table by the window each day. I watched the seasons change through the Starbucks offerings, from pancakes to carrot cake to brownies, exotic American pastries sold to French customers with pride.

When I told people where I spent my time, my American friends were perplexed, but my new French friends were downright horrified. They were fiercely opposed to Starbucks, and to Amazon, and to all the other American chains that threatened their patrimoine (with the strange exception of McDonalds, which everyone seemed to love in a way no one in New York ever had.) In my notebook, I collected a long list of cafés that Parisians assured me would be friendly to writers. They were all a train ride away from my busy neighborhood in the heart of the city. I visited a few, and found them lovely, but I never managed to go often. I found it difficult enough to make myself leave the house each morning, much less get on the train. I continued to work in the Starbucks on the corner, and learned to avoid the subject.

Besides the traditional cafés and the Starbucks, there were two other categories of places where one could go to write in Paris. In the first were the Brooklyn-style coffee shops, with their raw wood tables and bins of small succulents, where bearded baristas made perfect hearts in each cappuccino. New ones opened in Paris each week. These spaces were often small and overheated, with hip music cranked so loudly I could not think. If I managed to get a seat at all, I found myself elbow-to-elbow with English-speaking young women who looked exactly like me on their identical Macbooks. It felt just like being in Brooklyn, only more cramped. I continued to prefer the Chinese tourists and French pre-teens who surrounded me in the spacious and anonymous Starbucks.

In the second category were the “co-working cafés,” which had recently sprung up to meet the needs of a new class of freelancers. French people were always recommending these to me. There was a particularly nice one a few streets from my house. Co-working cafés were just like coffee shops, except that you paid by the hour for the right to be there. In exchange, you had access to a vast array of free snacks. Endless free snacks were exactly why I did not like working at home. And, given my penchant for procrastinating, paying by the hour served only to depress rather than to motivate me.

And then, finally, after a year of grande Americanos in paper cups, I made the discovery I had been waiting for. That summer, a friend invited me to join her at the Bibliothèque Historique de la Ville de Paris in the Marais. Amid the neighborhood’s high-end designer shops and swaths of impeccably dressed Parisians, the gay bars and the Jewish delis, the library was a hidden sanctuary in a grand hotel particular—an 18th century mansion. Applying for a library card took only a few minutes, and from there I was ushered into a giant hall with long dark wood tables and green leather chairs. Light streamed in through the high windows and books containing the history of the city lined the walls. And sure, as in all libraries, there was the man who came each day to watch soft-core porn. But the ceilings were lined with carved wood beams and the space was filled with a studious hush. I immediately texted every other freelancer I knew in the city to tell them what I had discovered. They came, told their own friends. Soon, on any given day, the library was filled with five or six young writers who vaguely knew each other, and when the library closed in the evening, we wandered the few blocks down to the Seine. We sat on the cobblestones, sharing a bottle of wine on the banks, swapping book recommendations. I took iPhone photos of those golden sunsets, though I knew I would never share them. I was amazed and embarrassed at how perfect my life had become. And then, like all summers, that particular one came to an end. By late August, the university students had returned. They woke early, and queued outside the library doors in the mornings. The seats at the long, wooden tables were taken as soon as the doors opened.

But, I soon discovered, Paris was filled with libraries, modern ones and old ones, many of them stunningly beautiful. Through trial and error, I found another. This one is tucked behind a side street near the gritty Gare de Paris-Est. To access it, you walk through a park filled with loitering men. At the far end, you go through a concrete tunnel that looks like the entrance to a parking garage. Then, you emerge into a luminous courtyard filled with palm trees and white stones. The building, with its three stories of arched windows, looks like a palace on the coast of the Mediterranean. Each time I see it, I am filled with joy. It is impossible not to imagine a tropical breeze. The interior of the library was entirely gut renovated last year. The reading rooms are decorated with contemporary furniture straight from a Pinterest page—light gray rugs and eggshell blue chairs and yellow pillows. There is an extensive comics collection and a modern glass elevator. Most days, I sit at a sleek white table along a mezzanine. When I stand and look down into the room below, I see migrants and refugees, their sleeping bags beside them, sitting in egg-shaped chairs while they charge their cell phones and use the free Wi-Fi to write home. At 3pm, the library fills with school children who sprawl on the floor reading comic books. Each time I arrive, I feel elated and ready to write. Sure, Hemingway never sat in this chair. But here, at last, is the real romance of the city I’ve come to love.

Nadja Spiegelman’s debut memoir I’m Supposed to Protect You from All This, a story of mothers and daughters—and mothers as daughters—traced through four generations, from Paris to New York and back again, will be published in August 2016. 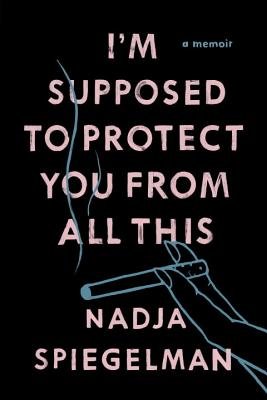 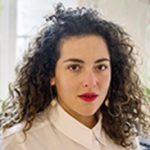 NADJA SPIEGELMAN grew up in New York City and now divides her time between Paris and Brooklyn.

NADJA SPIEGELMAN grew up in New York City and now divides her time between Paris and Brooklyn.