These stores may be shuttered, but their legacy lives on through art and words in this new book.

By Bob Eckstein • 5 years ago 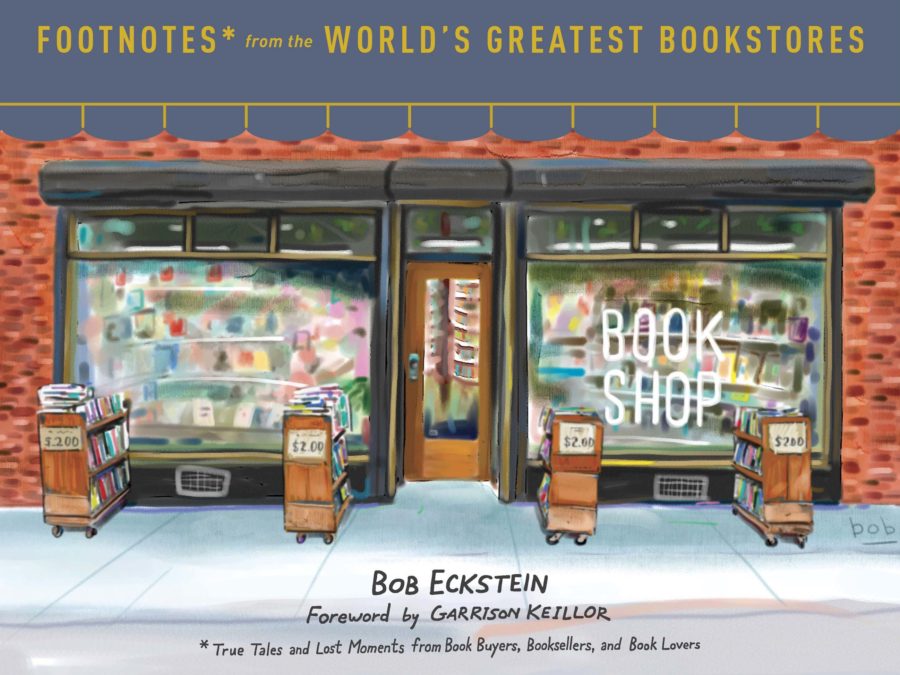 At Read it Forward, we think there a few things better than an independent bookstore (except maybe a library). New Yorker cartoonist Bob Eckstein agrees and his new book Footnotes from the World’s Greatest Bookstores: True Tales and Lost Moments From Book Buyers, Booksellers, and Book Lovers is an ode to them. Eckstein selected 75 of the most interesting and beautiful bookstores from across the globe, painted the exteriors and then approached great artists, writers and creative minds—including David Bowie, Tom Wolfe, Diane Keaton, Alice Munro, Robin Williams and Paul McCartney—to collect hundreds of stories that took place in bookstores. The result is, in Bob’s own words, “a celebration of independent stores everywhere and for all those who love books…this book is about all bookstores, to all bookstore owners and employees, past and present. This is for anybody who ever dreamed of living in a bookstore.”

Sadly, independent bookstores are somewhat of an endangered species and some of these bastions of literary sustenance—not immune to the changing times—have had to close their doors. Though, while they are gone, they—and the stories from within their walls—have not been forgotten, thanks to Eckstein’s book.

Click on the white dots below to see Bob’s paintings of the now-closed bookstores’ exteriors and to read recollections from some of their greatest moments in existence. 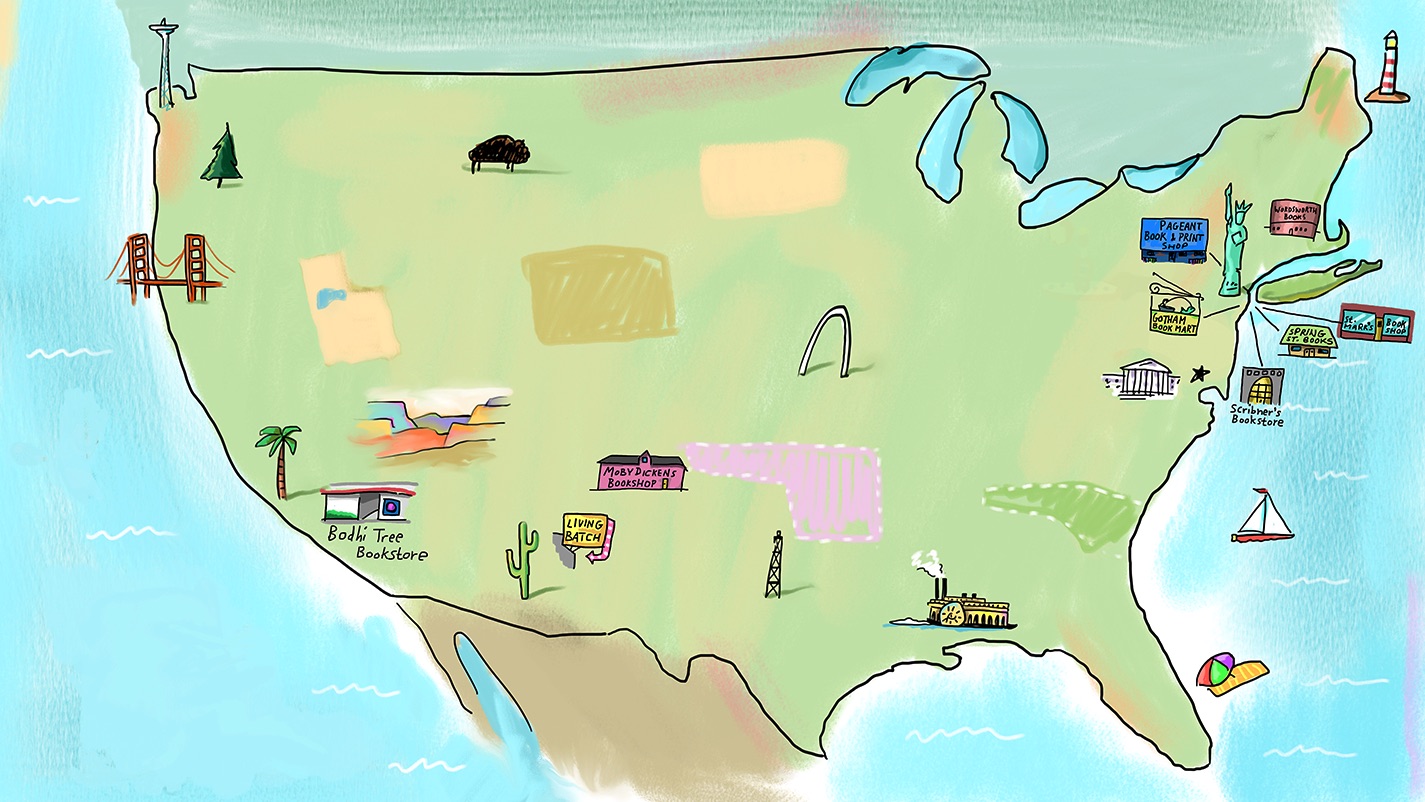 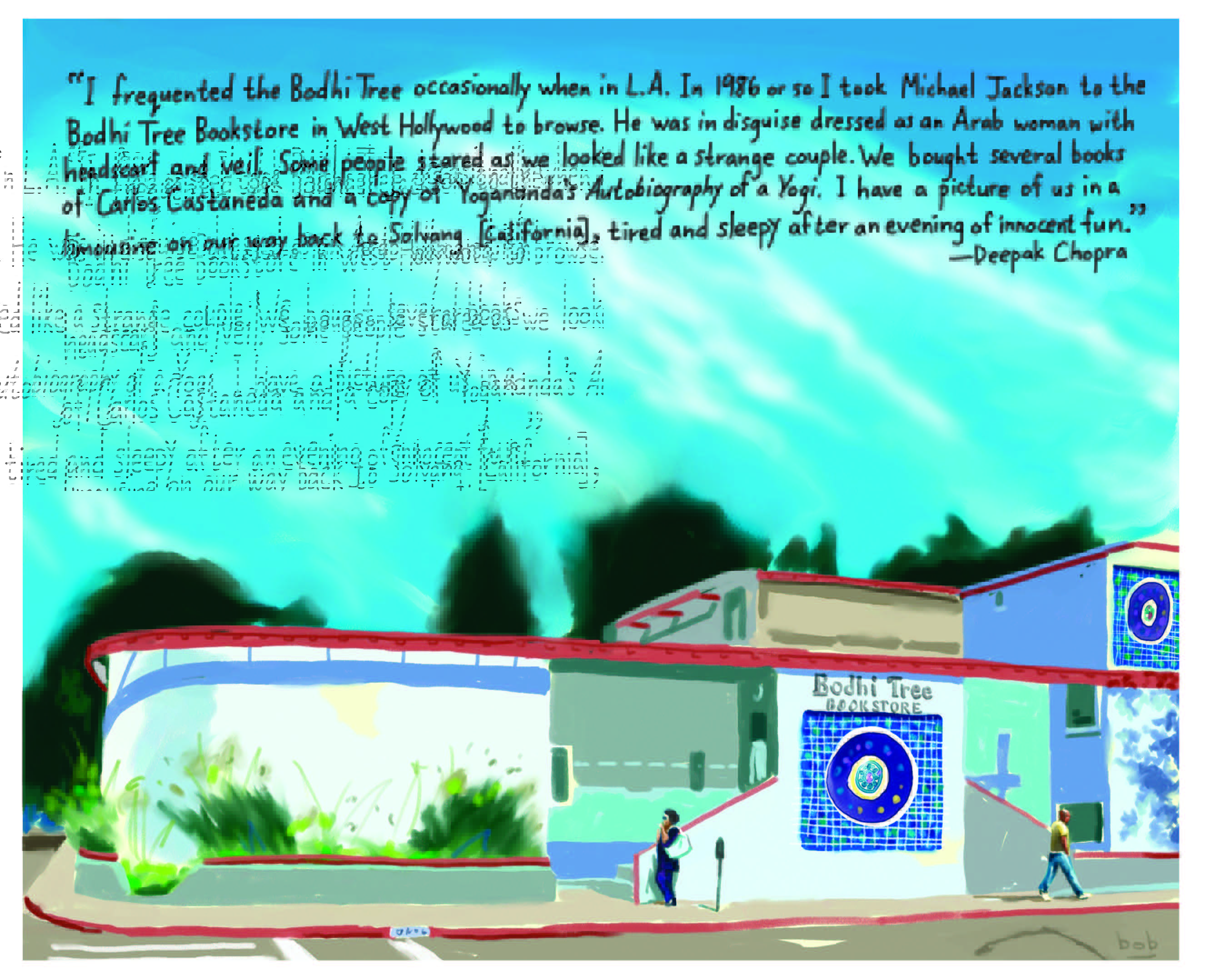 Bodhi Tree Bookstore in Hollywood was one of the first, and certainly one of the largest and most extensive, spiritual-themed bookstores in the United States. It closed on New Year’s Eve 2011.

The store’s genesis began in the late 1960s when three Douglas Aircraft employees became interested in transcendental meditation and Buddhism. Dan Morris and remaining owners Phil Thompson and Stan Madson were working on weapons of mass destruction before starting the store in their thirties. The trio opened Bodhi Tree as a spiritual center and bookstore in 1970.

The Bodhi Tree Bookstore was a founding sponsor of the Los Angeles Times Book Fair. In the early 1980s, actress Shirley MacLaine dropped by, changed her life, the life of the bookstore, and a significant portion of the spiritual thinking in America. Her bookstore visits became a TV series and a bestselling book, Out on a Limb. 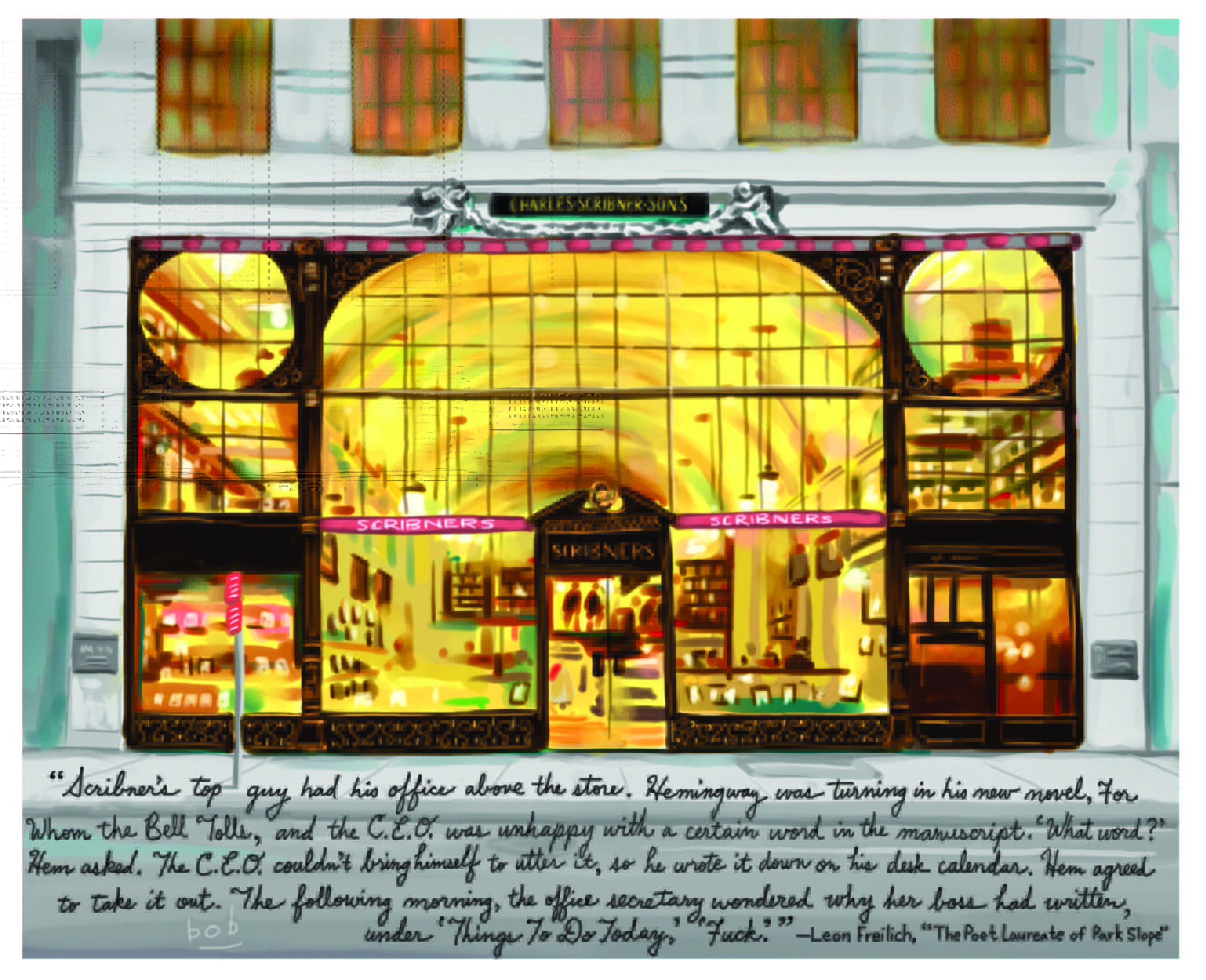 This Fifth Avenue Beaux-Arts masterpiece landmark building was designed by architect Ernest Flagg specifically for Scribner Bookstore for Charles Scribner’s Sons publishing, whose authors included F. Scott Fitzgerald and Thomas Wolfe. The store was forced to move to the more affordable downtown area before it was ultimately purchased by Barnes & Noble, Inc. 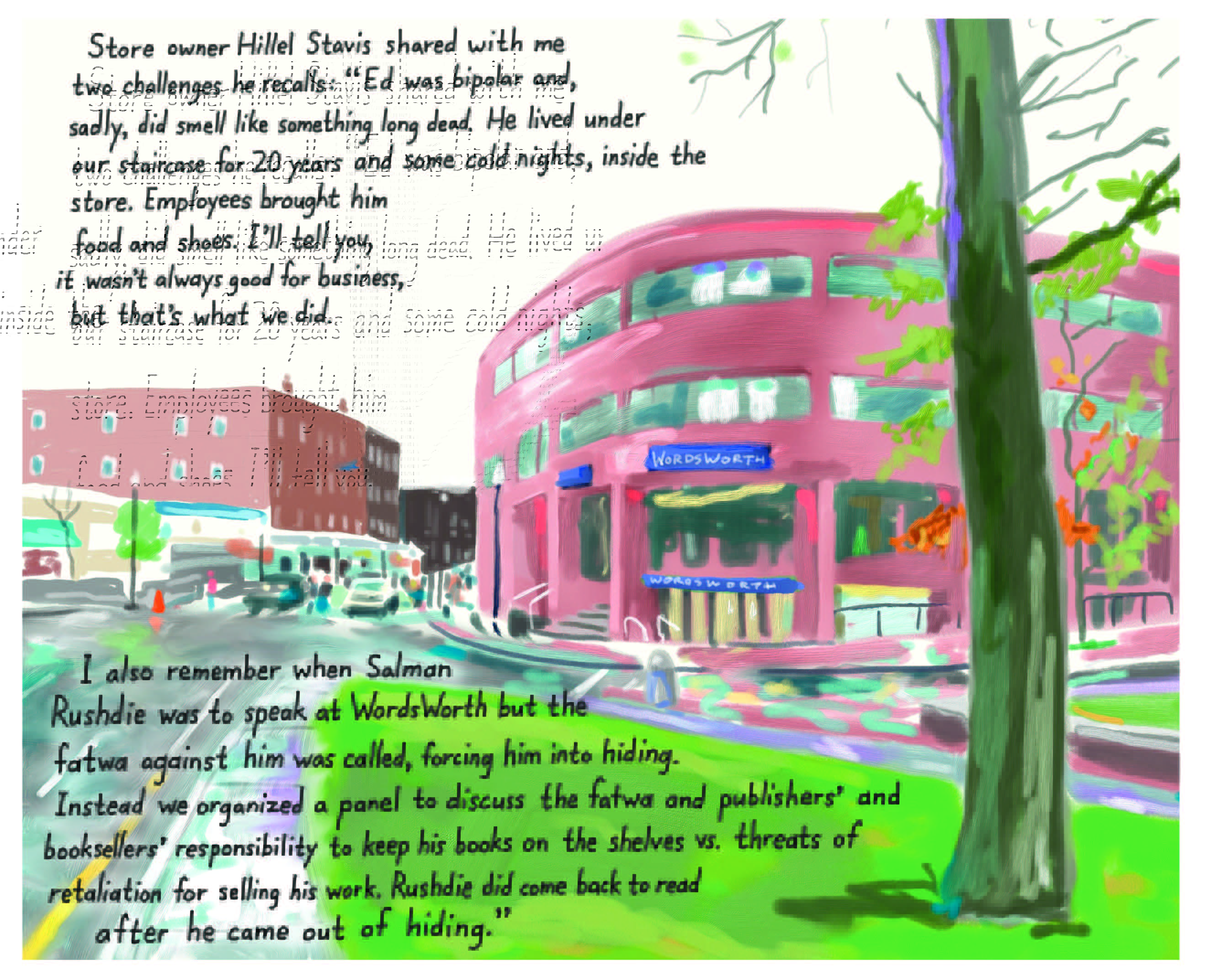 Cambridge’s WordsWorth Books was one of the innovative forces in the modernization of the bookselling landscape. It created a computer-driven inventory system for bookstores that is still used today. 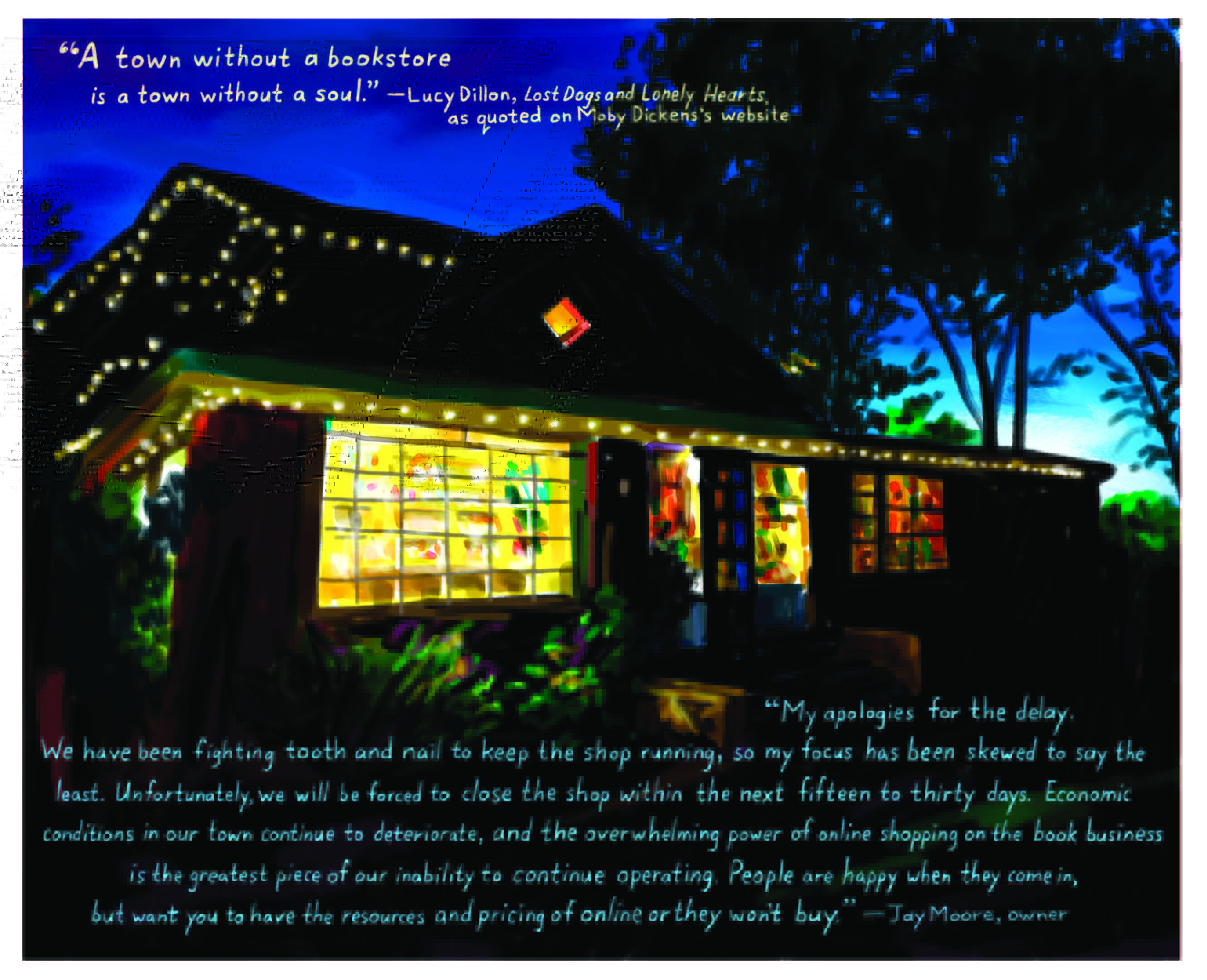 Moby Dickens was a premier independent bookshop in Taos, New Mexico, specializing in rare and out-of-print books about the Southwest and very active in the local writing community. 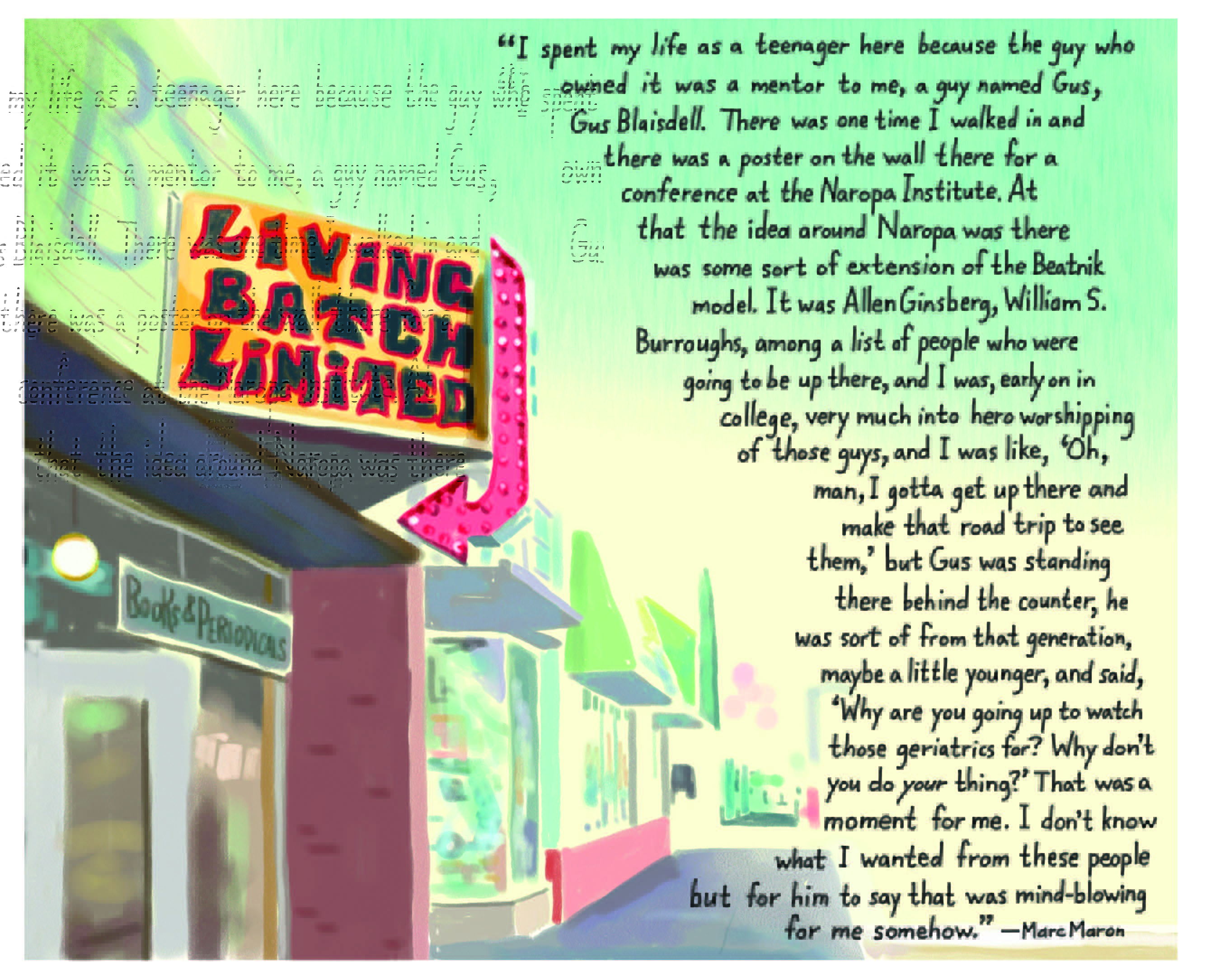 A great supporter of authors, poets, and small-press enthusiasts, Phil Mayne opened the Yale Street Grasshopper in Albuquerque, New Mexico, in 1967 and sold Beat and American contemporary poetry and underground papers. In 1970, the Grasshopper changed ownership and became Living Batch Bookstore. (“How the Batch got its name?” Pancho Elliston, an early owner says: “It’s from Ed Dorn’s poem Gunslinger. Gunslinger injected into a dead person five gallons of acid. He awoke and became ‘a living batch.’ ”)

After Elliston, the essayist Gus Blaisdell took ownership from 1976 until its closure on Christmas Eve 1996. In 1978, Batch got a phone and in 1988, a cash register. “There was no gay, no women, no politics, no black, no small-press poetry, no serious literature in the state,” Blaisdell said about the store’s early years. Authors who frequented the Batch ranged from Henry Rollins to Allen Ginsberg to Mary Higgins Clark. 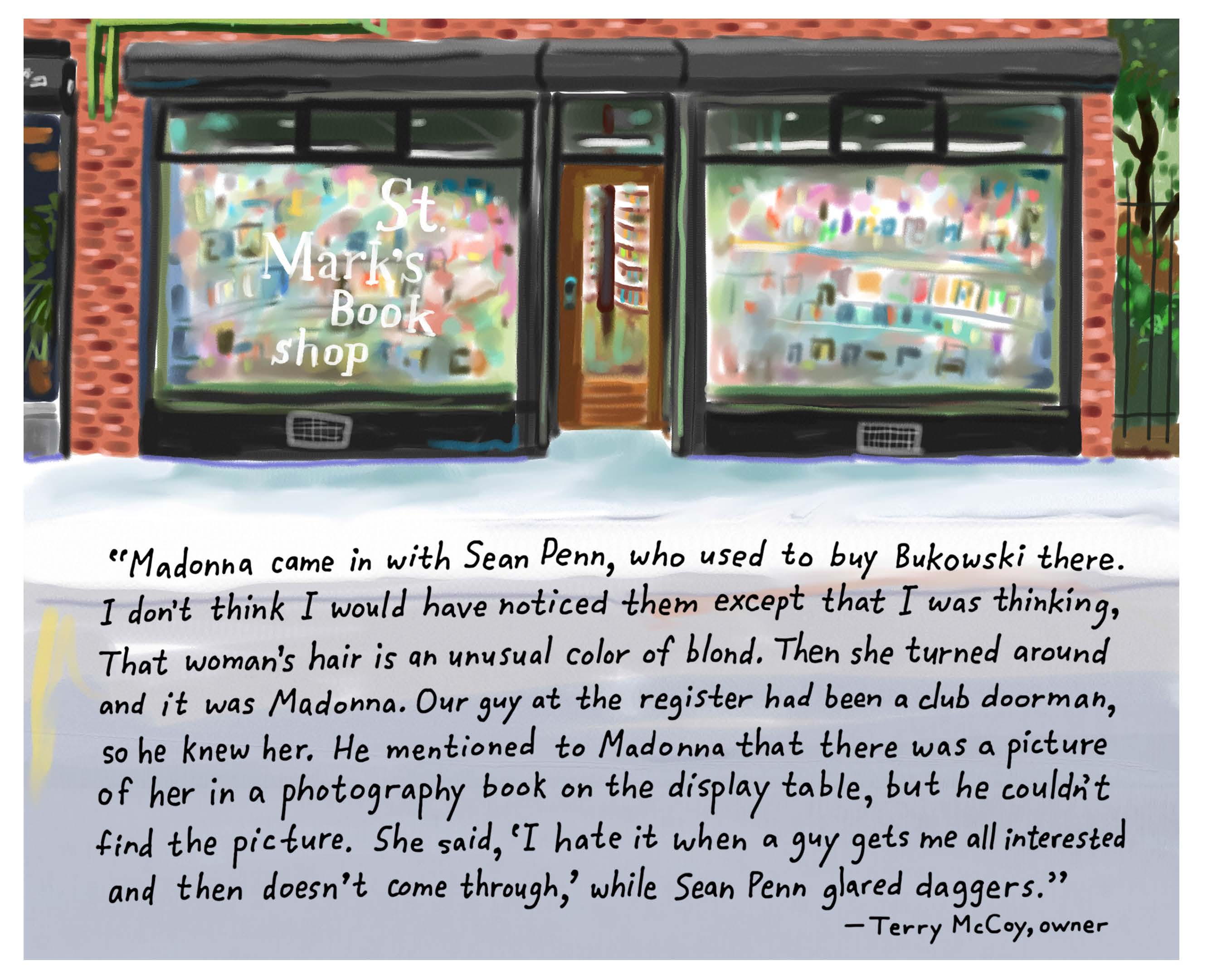 St. Mark’s Bookshop was established in New York City’s East Village in 1977 and moved four times within the neighborhood, finally closing in 2016. 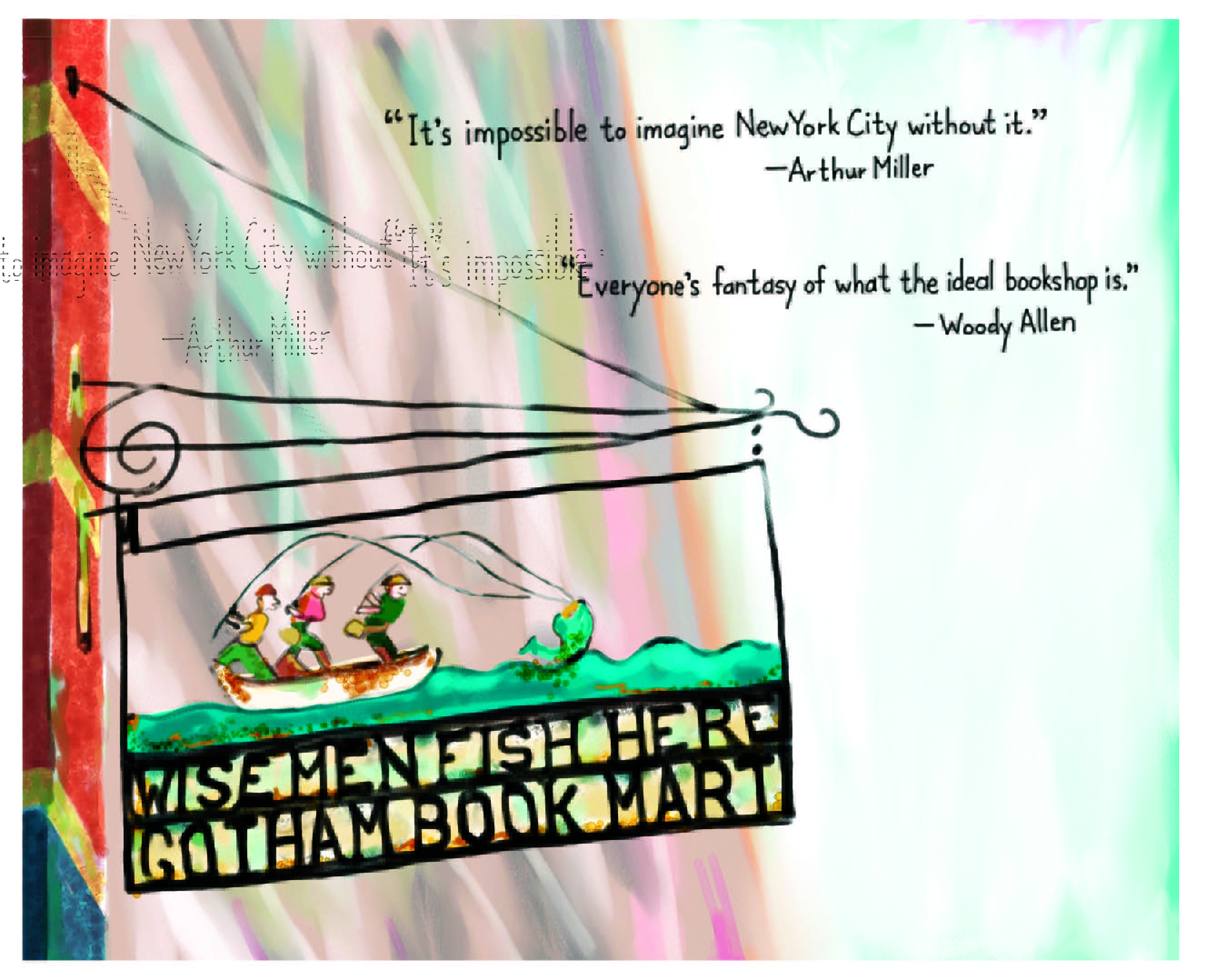 Gotham Book Mart was a meeting place for the literati and many twentieth-century cultural icons. Frances Steloff was one of the world’s most distinguished independent booksellers. In 2008, the University of Pennsylvania received over 200,000 items from its inventory as an anonymous gift. 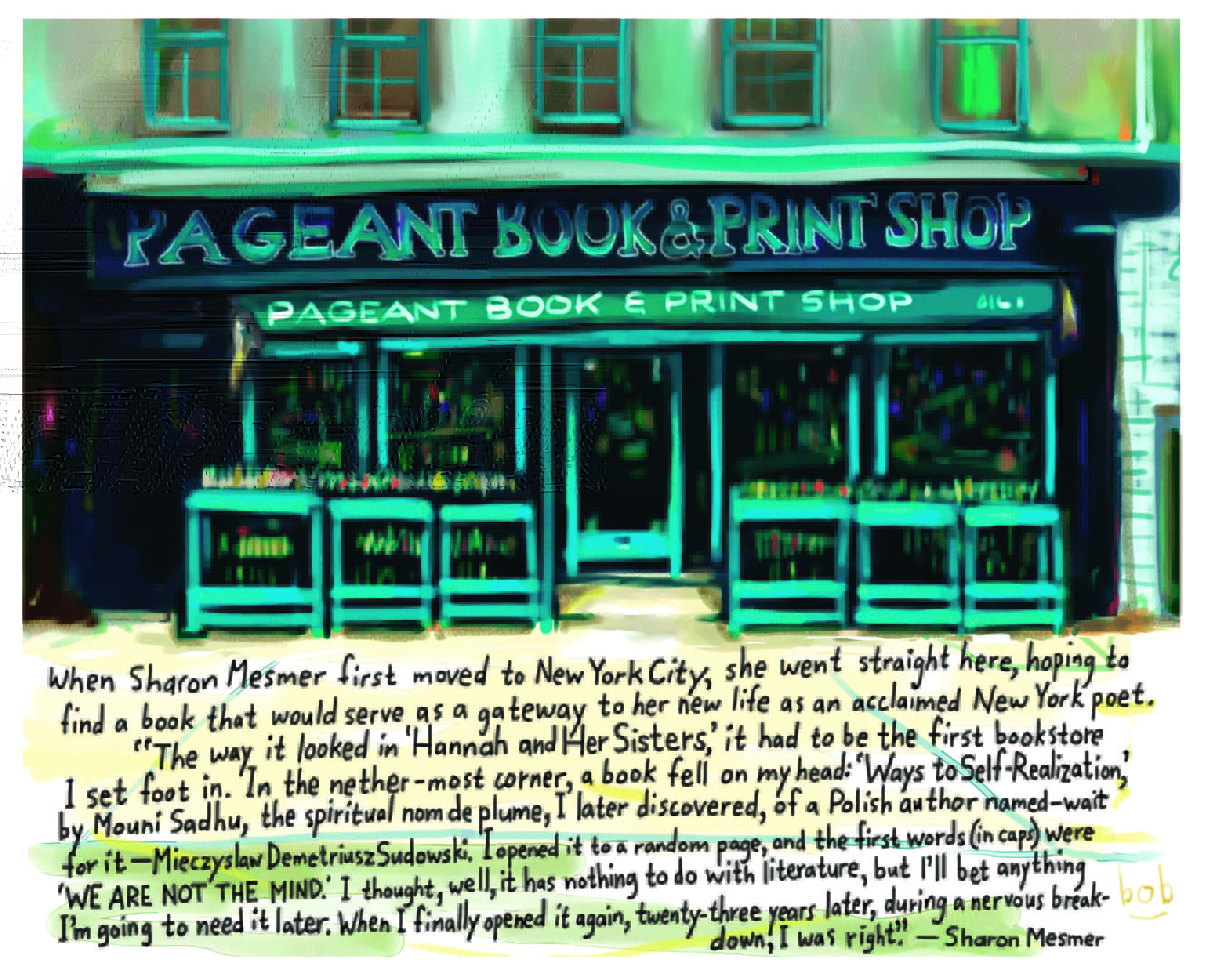 The Pageant Book & Print Shop on Twelfth Street in Manhattan was in business from 1946 to 1999 until it became an online store. It has since returned as a small print shop on Fourth Street. 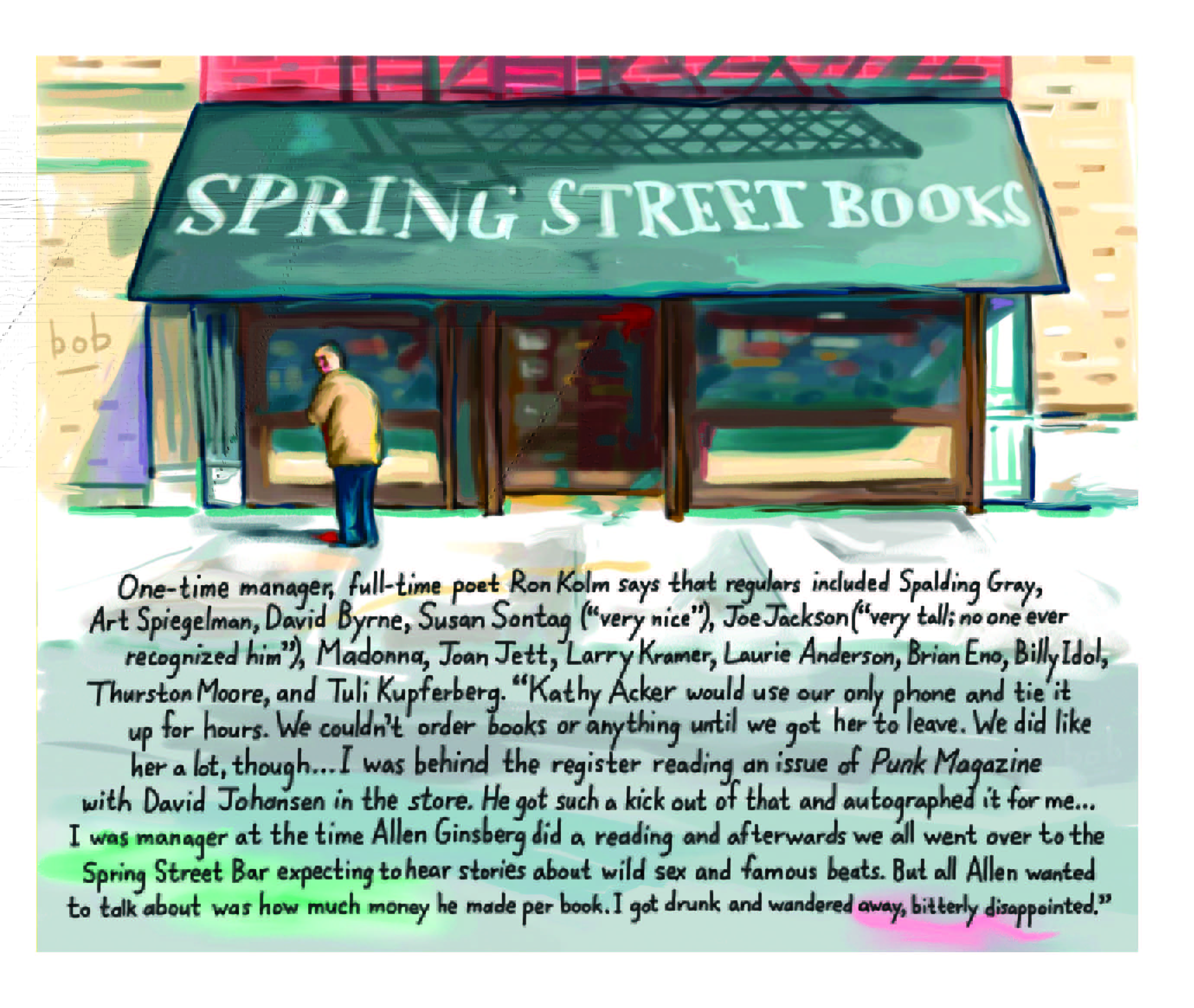 Text and Images reprinted from Footnotes from the World’s Greatest Bookstores © 2016 by Bob Eckstein. Published by Clarkson Potter, an imprint of Penguin Random House LLC. 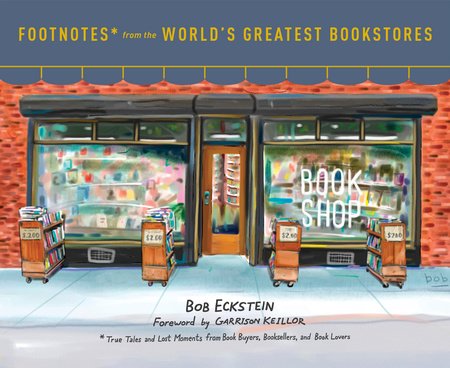 Buy The Book
BOB ECKSTEIN is an illustrator, writer and cartoonist. His work has appeared in The New Yorker, The New York Times, and The Wall Street Journal, among many other publications. He is also known as the world's leading snowman expert and is the author of the holiday classic The History of the Snowman. He lives in New York City.

BOB ECKSTEIN is an illustrator, writer and cartoonist. His work has appeared in The New Yorker, The New York Times, and The Wall Street Journal, among many other publications. He is also known as the world’s leading snowman expert and is the author of the holiday classic The History of the Snowman. He lives in New York City.