The Borne author discusses birdwatching, literature, and receiving dried squid in the mail. 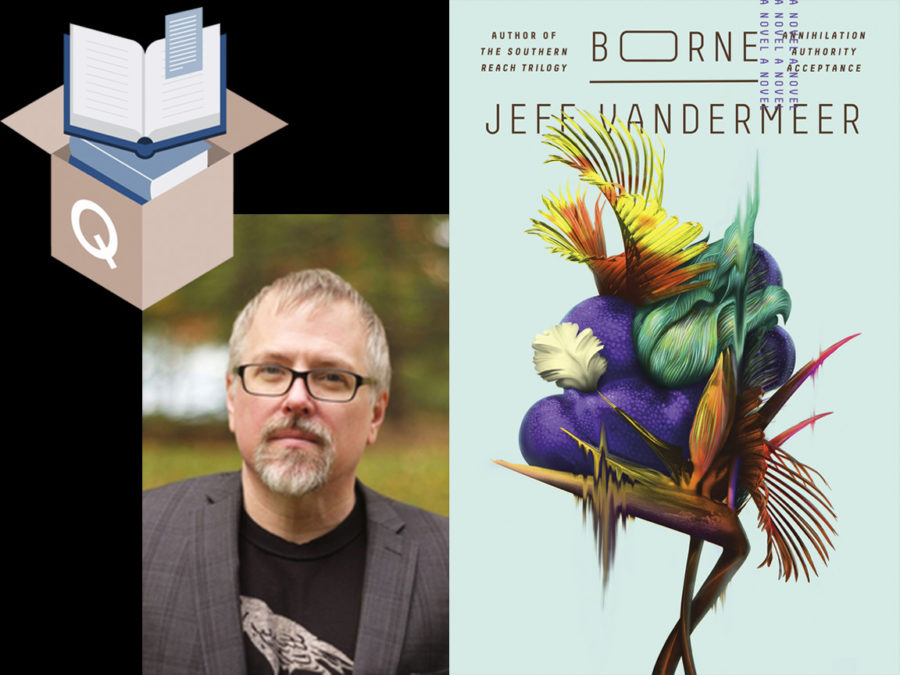 Here at Read it Forward, we love books, just like you love books and we’re always looking for new novels (because, of course). One way we’ve been finding out about awesome reads (and getting them sent straight to our doorstep!) is through Quarterly Co. They have an awesome literary subscription box called, unsurprisingly, The Literary Box. Four times a year, subscribers receive a box that’s curated by an author; inside is an annotated copy (with handwritten notes!) of the author’s new book, plus two other reads selected by the author and some delightful bookish goodies.

We paired up with our friends at Quarterly Co. to give away 10 of their incredible literary subscription boxes, featuring the new novel Borne by Jeff VanderMeer. We were so inspired by his selections, that we threw in two literary genre picks of our own: You Should Have Left by Daniel Kehlmann and The Space Between the Stars by Anne Corlett.

The folks at The Literary Box sat down with Jeff VanderMeer and asked him about his writing career, his favorite novel of all time and the authors he’d invite to a dinner party. He also shares his thought process behind his curated Literary Box.

Enter to win a Quarterly Co. Literary Box curated by Borne author Jeff VanderMeer—a special copy of Borne annotated by the author with hand-written notes, two additional curated titles (Sjon’s The Blue Fox and Amelia Gray’s Gutshot), delightful bookish goods and two other books we added to sweeten the deal (You Should Have Left by Daniel Kehlmann and The Space Between the Stars by Anne Corlett)—by clicking here, then get to know more about this awesome sci-fi author in the interview below.

The Literary Box: Could you tell us a little bit about yourself and how you got into writing? When did you know that you wanted to be a writer?

Jeff VanderMeer: It all kind of started with bird watching. I kept a bird list in Fiji, where I spent four or five years of my childhood. But I got bored with that, so I started a personal diary in the journal instead (although I never gave up bird watching!). I think I was seven or eight. But I got bored with that, too, so I started writing poems, which since I was so young were titled things like “Oh, how I love the sea!” And I also wrote down little fables, sometimes actually rewriting Aesop’s fables. At that same time, my parents were reading me things like William Blake’s The Tyger and giving me classics new and old. From that moment on, I didn’t really think about it—I just felt like I was a writer and although I was briefly dazzled by the idea of being a marine biologist, it turned out I just loved looking into tidal pools.

In my teens, I wrote and published a lot of poems, some short stories, started and edited a literary magazine, ran a community reading series, and wrote two terrible fantasy novels based on my love of Patricia McKillip and others. This all helped me very early, by about sixteen, to have a good lay of the land. I was also lucky enough to be mentored by people like the poet Enid Shomer, the novelists Jane Stuart and Meredith Ann Pierce, and in general to get a good start on a lifelong devotion to writing fiction.

TLB: How did the idea for Borne come about?

JV: Just as with Annihilation, I had put into the back of my head years earlier, “I want to write in some way about Florida.” I had also put in my head “I want to in some way write about my childhood.” But that wasn’t as easy a proposition because I had a kind of block in that direction, I think because I instinctively knew that I needed more distance and that, even though I lived in Fiji, I wasn’t from there. This actually created a lot of angst early on in how to write fiction because I felt like I’d been everywhere but belonged nowhere.

But then one day I had this sudden inspiration, an image in my mind of the flank of a giant bear and entangled in it something that looked a little bit like a closed-up sea anemone…and a woman named Rachel who found it…and realized it was something more than what it looked like. And I knew that Rachel didn’t belong in the city—that she had come from somewhere else, and that, although it’s never named in the novel, that place was the South Pacific. And suddenly, I could write about the places I knew as a child, as part of her backstory.

TLB: How has the novel changed since you first began writing it?

JV: I don’t seriously start to put words on the page until I’ve thought about a novel for a long time so that when I do, most of the changes happen at the level of scene or paragraph. Sometimes, of course, the structure will change as a result, but not always. The story I wanted to tell didn’t change, but as time went on, the relationship between Rachel and her boyfriend Wick deepened and grew and the character of the Magician, Wick’s rival, came into focus in interesting ways. But Rachel’s voice always came very naturally to me.

TLB: Do you have any specific or strange writing rituals that get you into a groove?

JV: I used to need special pens and pencils and journals. No more! These days, I’m just as happy to scribble an idea or scene fragment on the back of a leaf while I’m hiking. I also don’t really care what time of day I write, although some books feel like night-time narratives and so I might write late at night for something like the novel I’m working on now, Hummingbird Salamander. But the key things that never change is that I write my drafts long-hand and that I get my best ideas while hiking out in the wilderness or while lifting weights in the gym. That probably has to do with having to live in the moment and not be distracted, which gives my subconscious and imagination room to operate.

TLB: Do you have a favorite character from Borne?

JV: I know that Borne himself—shape-shifting and spectacularly tentacular!—is a big draw, as is Mord, the giant psychotic bear. But my favorite character is Rachel, the narrator, who just simply keeps on keeping on, trying to do her best as she navigates a landscape both physical and ethical that’s complex and difficult. I feel immense sympathy and love for her.

TLB: What is your favorite novel of all time?

JV: I wish I could answer this question, but there are too many. So instead I’ll tell you an anecdote about one of my faves, Bulgakov’s The Master and Margarita. Recently, as guest speakers at a Sigma Tau Delta conference, my wife Ann and I snuck out long enough to get some shopping in and in a men’s consignment shop, the owner (Hank Bullitt—great name!) found out I was a writer and asked what my favorite book was. For some reason, I was thinking of meeting Marty Willson-Piper, guitarist of The Church, on Bondi Beach, and how he’d had a battered copy of The Master and Margarita, so that’s what I said was my favorite. And Hank Bullitt just about jumps out of his skin and tells us that his late cousin was the U.S. Ambassador to the Soviet Union and knew Bulgakov and was the inspiration for a character in the novel and told us a lot of interesting stuff about that time period and his cousin. Talk about an odd coincidence!

TLB: Which three authors would you invite to a dinner party?

JV: From any time period? Vladimir Nabokov, Angela Carter, and Amos Tutuola. Now that would be a party!

TLB: Do you have any advice for young writers?

JV: Go with your heart. Write what is personal to you and that you’re passionate about. Never worry about trends and be true to yourself. No trend is worth chasing and the landscape changes so frequently anyway that the most important thing is that you are happy with and proud of your writing. When you achieve success, you want it to be on your own terms.

TLB: Do you read multiple books at a time or do you focus on just one?

JV: Usually, I focus on just one, but it depends. If I find two novels different enough or a novel and a nonfiction book, I’ll read more than one. I was just reading Lidia Yuknavitch’s The Book of Joan and Rooted: The Best New Arboreal Nonfiction at the same time, alongside Wendell Berry’s The Mad Farmer Poems.

TLB: What was the thought process behind curating your Literary Box?

JV: Sjon’s The Blue Fox was a no-brainer because it puts at the fore something that’s in the backdrop of Borne, which is to say a narrative involving foxes. And then I’m writing a story “The Strange Bird,” about the strange bird mentioned in Borne and, as a nod to Sjon, one of the foxes in that story in Blue. I also like Sjon’s deceptively delicate touch, where he can say so much with so few words, and how that novel explores both human and animal nature.

Amelia Gray’s Gutshot is the only book a bookseller ever tried to stop me from buying. “You know that’s really weird, don’t you? Might not be for you.” And I said, “Oh yes I know it’s weird,” and I bought five copies. I am in awe of Gray’s ability to be both grounded in reality in her stories, and also to be so surreal. And I think that’s a quality I was going for in Borne, too. Not to mention, Leonora Carrington, who is being celebrated this year, would have loved Gray’s work, and Carrington’s another influence of mine.

TLB: What is your favorite thing that you have received in the mail?

JV: Gosh, this is tough. For years, because of a prior novel, I got pounds and pounds of dried squid in the mail. I wouldn’t say that was a favorite, but it was a thing that happened. I’ve also received a stuffed-animal meerkat head glued to a plate in the mail because of another novel, along with lots of fan art over the course of my career. I guess, honestly, the heartfelt letters from readers who appreciated some aspect of my fiction have been the best, especially where it’s clear that something therein made them happy or took away their stress or in another way were of use.

Also, I’m really looking forward to getting a woodcut in the mail soon from the artist Theo Ellsworth—a 2-foot-tall illustration of Mord. 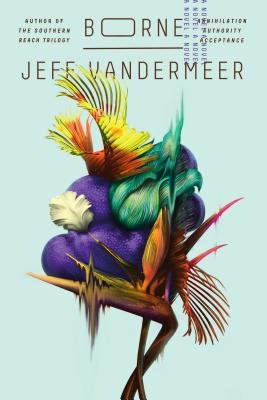 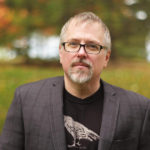 JEFF VANDERMEER is an award-winning novelist and editor. His fiction has been translated into twenty languages and has appeared in the Library of America's American Fantastic Tales and in multiple anthologies. VanderMeer also writes for the Guardian, Washington Post, Los Angeles Times, and New York Times Book Review, among others. He grew up in the Fiji Islands and now lives in Tallahassee, Florida, with his wife.