I find that urban legends are often illogical—people’s actions and motivations don’t make sense. Why did the girl who almost got eaten by the pet snake let it sleep in her bed? Why, oh why, didn’t the babysitter who got tons of scary calls telling her to “check the children” just, you know, check the children as soon as she got the first creepy call?

There are variations on this legend, and I heard almost all of them during my army days. One soldier told this story during a dinner in the tents and insisted that she was the cousin of a girl who was in the same unit of the girls who got caught. Weeks later, I heard it again on the train, from an officer who insisted her ex-boyfriend was stationed on the base where the whole debacle took place.

Anything is possible, and maybe the story was true, but if it was, I was sure it would have made the papers. By the third time I heard the story (in the shooting ranges; by a sergeant who swore he was the neighbor of the high ranking officer who punished the girls) I snapped and told the story teller to shut up.

Snapping didn’t help me much; I later heard a version of the story a fourth and a fifth time. By the tenth time I just gave up on asking questions. Instead of being irritated, I began to wonder why so many people told this particular story; what made it something that they wanted to hear, tell, and believe? I realized that all urban legends represent the type of stories audiences crave. It was unfortunate they never [?] made sense.

And so, when I wrote my first novel, I dedicated some of its pages to an attempt at making sense of that urban legend of the two naked girls. I tried to imagine who those girls were, and what could possibly explain their decision to take off all of their clothes one day, while guarding. I imagined a life for the Egyptian soldiers, one fuller than their momentary indiscretion with the binoculars.

At first I was just forcing the details of that urban legend to make sense, but in so doing I ended up with a story about various shapes of entrapment, the possibility of escape, and our ability to free others when we cannot free ourselves.

Today, when I hear urban legends, I no longer snap; I instead listen – then imagine.

The People of Forever Are Not Afraid by Shani Boianjiu – Excerpt

SHANI BOIANJIU was born in 1987 in a small town on the Israel/Lebanon border, and she served in the Israeli Defense Forces for two years. Her fiction has been published in Vice magazine and Zoetrope: All Story. Shani is the youngest recipient ever of the National Book Foundation’s 5 under 35 Award, for which she was chosen by Nicole Krauss. She lives in Israel. The People of Forever Are Not Afraid is available from Hogarth wherever books are sold.

Visit Shani online on Twitter @shaniboianjiu and on Goodreads. 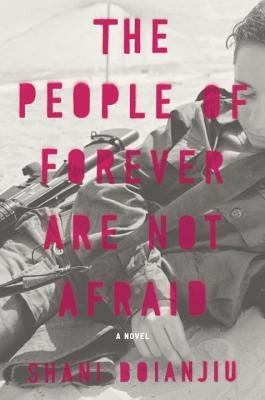