Reading Confessions From the Co-Authors of The Knockoff

What do you think might be challenging (or fun!) about writing a novel with another person? Let's speculate in the comments.

“In thirteen years of editing fiction, I had never worked with co-authors before,” admits Jenny Jackson, Senior Editor at Doubleday. “Writing always seemed like a solitary sport to me—like swimming or long-distance running.”

“So when I acquired Lucy Sykes’s and Jo Piazza’s The Knockoff, about the 40-something editor-in-chief of a fashion magazine who finds her job stolen by a 20-something tech whiz, I had a lot of questions: How on earth did they work together? Was it fifty-fifty? And with a book as funny as The Knockoff, which one of them was actually the hilarious one?

As we began to work together I started getting a sneaking suspicion that these characters might not be complete fabrications. Like Imogen Tate, Lucy made her name working at fashion magazines. And, like Imogen, Lucy is a technological contradiction: a genius on Instagram who still keeps a paper schedule taped to her iPad.

Meanwhile, at first glance Jo has a few Eve Morton tendencies: She fires off emails faster than most of us speak; she Tweets her way through tech conferences; and I’ve seen an actual photo of her wearing Google Glass.

But unlike Imogen and Eve, Lucy and Jo are actually friends. They wrote this book together, handing pages back and forth, pouring over notes as they ate brunch at Café Cluny, drinking wine and brainstorming in Lucy’s kitchen. They made co-writing seem easy.

And now that I know them, I don’t really think Lucy is Imogen or Jo is Eve (Lucy is way savvier than Imogen, and Jo is a million times sweeter than Eve). And they are both the hilarious one.”

Q&A WITH THE KNOCKOFF AUTHORS LUCY SYKES AND JO PIAZZA

The Book I Said I Finished … But I Lied

JO: The Fortress of Solitude by Jonathan Lethem; Democracy in America by Alexis de Tocqueville; Fifty Shades of Grey by E. L. James

LUCY: The Inferno by Dante Alighieri; A Brief History of Time by Stephen Hawking

Book(s) I Love to Pass Along

JO: A Tree Grows in Brooklyn by Betty Smith …it gets better when you get older.

LUCY: The House of Mirth by Edith Wharton; The Beach by Alex Garland; Me Before You by Jojo Moyes; Brideshead Revisited by Evelyn Waugh; Fear of Flying by Erica Jong

The Fictional Character I Love to Hate

My Playlist: Music I Listen to While Writing/Reading

JO: My writing music is actually a mixture of sixties French pop with eighties American hair bands … no joke.

Find out more about The Knockoff at TheKnockoffBook.com and theknockoffbook.tumblr.com.

Congrats to Ola N., Kimberly F., Manon K., Marylynn L., Sherri S., and 20 other members of the Read It Forward community! Their entries were selected at random to win an Advanced Reader’s Copy of The Knockoff by Lucy Sykes and Jo Piazza. 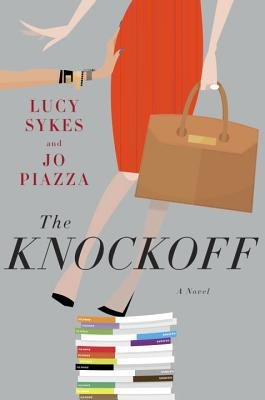 Buy The Book
LUCY SYKES moved from London to New York City in 1997 and took the fashion world by storm. She was Fashion Director at Marie Claire magazine for six years and, most recently, Fashion Director for renttherunway.com. JO PIAZZA is an award-winning journalist, editor, digital content strategist and author. She is the Travel Editor of Yahoo and currently a contributor to the Wall Street Journal and Elle.com.