In About Looking, his seminal collection of essays, the art critic and novelist John Berger writes about why war photography matters:

“We are seized by [these photographs]…as we look at them, the moment of another’s suffering engulfs us…most typical photographs record sudden moments of agony—a terror, a wounding, a death, a cry of grief. These moments are utterly discontinuous with normal time…the image seized by the camera…[reinforces] the same contrast: the contrast between the photographed moment and all others.”

I read Berger’s words when I was a student, but they rushed back to me when I first read the manuscript for Sean Manning’s The Things That Need Doing, and they remained foremost in my mind as I worked with Sean to edit it into the finished book it is today. Like a good photojournalist, Sean writes his memoir with a lean, unflinching candor that lets images and events speak their own power.

The story will move you in its simplest details: Sean is a young man, in his twenties, finding his way in New York City, when his mother suffers a heart attack. He rushes back to his native Ohio to be at her side and remains there for the next year and a half as her medical condition only worsens.

Together they celebrate birthdays, holidays, and the simple joy of wheeling her out of the hospital room for a moment in the outdoor sun. Together they follow their beloved Cleveland teams – the Cavaliers and the Indians – that never quite seem to go all the way.

Sean becomes an expert in his mother’s care, the workings of our medical system, and the patois of nurses, doctors, orderlies, and administrators. None of it, of course, is supposed to happen to him – it is “utterly discontinuous with normal time” – but the only child of divorced parents, he remains with her, dutiful, tender, loving. This, I firmly believe, is the greatest gift we can give – bearing witness to their suffering, accompanying them on their journey.

I approach editing as a kind of carpentry: first a rough cut, then assembly, and then the finishing with finer and finer grades of sandpaper until the work is well-constructed, feels right to the touch. An editor suggests, asks, cajoles, demands, and pushes a writer as much as he can get away with. Editing a memoir, so deeply personal, can be even trickier. (Hey, about that chapter about your grandfather. I think we should cut it…)

I warned Sean early on that I expected him to be sick of me by the time we were done. But he displayed great patience with my demands all the way through. In many regards, I think the book was a continuation of the vigil and companionship with his mom.

The story is tragic. I cannot lie to you about that. I cried every time I read the manuscript and I read it many times. Sean and his mother, they won’t ever leave me and I don’t think they’ll leave you either. Like the photographs in Berger’s essay, there is an indelible power to Sean’s story that insists you step out of our busy time to reflect on what matters.

And, finally, speaking of photos, when we created the cover for this book I asked Sean if he had snap shots of his mother and him together. He sent in several, but the one that caught my eye and the one we used, is of them on a beach.

She is beautiful, beaming at the camera. He is a young boy, sitting cross-legged, staring into an uncertain future. As you will journey with Sean and his mom into this future, you will fall in love with them both, and when you are done, you will want to find somebody in your life and put your arms around them. 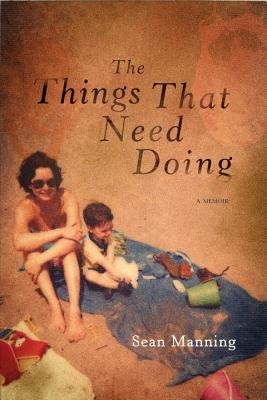