Raised on Long Island’s North Shore, Patti discovered her calling at the age of four and knew that she was destined for the stage. A prodigiously gifted child, she was one of only 36 young actors chosen for the inaugural class of The Juilliard School’s Drama Division, where she fought near-constant criticism from her instructors, and here describes those early years with disarming frankness.

From the heady days of her early twenties – crisscrossing the country as a founding member of the classical repertory theatre ensemble, The Acting Company – to her early success on Broadway, her four-year stint as Libby Thacher on the television series Life Goes On, her loving marriage to Matt Johnston, and much, much more, Patti chronicles her professional and personal life with inimitable candor and wit.

With its insightful retrospective of her career-defining turns, both on Broadway and abroad, in Evita, Les Misérables, Anything Goes, Sunset Boulevard, Sweeney Todd, and Gypsy, Patti LuPone: A Memoir reveals the artist’s deeply felt passion for music and the theatre and is, in the end, the compelling and quintessential tale of an exceptional life well lived.

PATTI LuPONE swept the 2008 theater awards winning the Tony, Drama Desk, and Outer Critics Circle Awards for Best Actress in a Musical for her performance as Rose in the critically acclaimed Broadway production of the classic musical Gypsy. LuPone has twice been nominated for an Emmy Award, has won two Grammy awards, and has numerous film, television, and on- and off-Broadway stage credits to her name. A five-time Tony nominee and two-time winner, LuPone was the first American actor to win Britain’s Olivier Award. Her memoir will be available wherever books are sold November 8, 2011.

Visit Patti online at PattiLuPone.com, read Patti LuPone’s Ramblings from the Road, and check out a gallery of iconic Patti LuPone moments.

Listen to Patti LuPone read from her memoir. 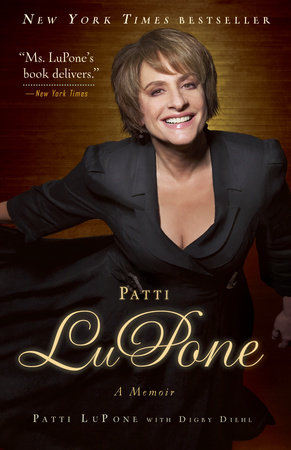