Like all of my novels, I began writing Fragile Beasts without a plot. I get my characters first and even then, they aren’t fully formed and it takes time for me to figure them out. Once I do, they tell me the story.

I guess you could say I have what is called a concept in mind but not a theme. (I never know the themes of my novels until they’re published and then other people explain them to me.) So I basically begin writing with a few underdeveloped characters, no plot, no theme, no outline, and a vague concept. You see why no one ever invites me to teach a creative writing course.

I never base my characters on real people but like all writers, the people and places and experiences of my own life shape my material. One of the most important people in my life and one of my greatest role models was my grandmother, Naomi, who passed away this summer at the age of 95.

The character of Candace Jack began to form in my mind at a time when Grandma’s health began to deteriorate and we had to move her off the family farm and into an assisted living facility. In hindsight, I’m sure my preoccupation with her during those years led to a desire in me to create a strong, compelling older female character, which is what Candace became and what helped form the story that Fragile Beasts would eventually become.

I have no writing routine which may or may not fill aspiring writers with relief or terror depending on who you are. When I’m ready to put words to paper, I’m at my computer every morning by 7 a.m. and will write for at least ten straight hours. This can go on for weeks or maybe only days before I encounter a creative roadblock that breaks my stride.

If I could write at this speed and with this kind of focus all the time I would publish six novels a year, but it takes me at least two years of struggling with my characters and story to complete one. For me just as much time spent thinking goes into writing a novel as actual writing.

In Fragile Beasts, Tawni O’Dell moves from the muted, bruised hills of Pennsylvania coal country to the colorful, flamboyant bull rings of southern Spain, taking us on a riveting journey not only between two completely different lands, but also between seemingly incompatible souls, casting us under her narrative spell in which characters and places are rendered with fragile tenderness.

Enter for the chance to win a copy of Tawni O’Dell’s Fragile Beasts on Read It Forward on Facebook. 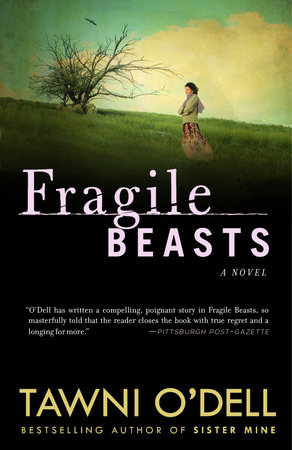