Do you ever find yourself flipping to the back of a book when you’re trying out a new author, eager to get a glimpse of his or her face before you start reading? Stephen Gallagher, author of The Bedlam Detective and celebrated novelist and screenwriter, shares a humorous behind-the-scenes look at author photos he’s had taken over the years.

We need to have headshots but, being writers, we don’t want to pay for them. Sometimes your publisher will commission some publicity stills but that doesn’t always work out – Hodder & Stoughton once sent me to a man who specialized in photographing fruit for Marks & Spencer. Maybe they chose him because of the “&”. I don’t know what fruit he had in mind when he studied me – maybe Zombie Cucumber. We took the shots in his attic, with me lurking behind a wormy pillar or looking out around a peeling chimney wall. The result: I looked like a ghoul in the fourth stage of something terminal.

Don’t tell me you don’t know what I’m talking about.

My first professional headshot was for the jacket of Valley of Lights. I forget who put me onto him, but the photographer was Arthur Waite of Arthur Waite Publicity, a one-man operation in a poky studio behind Salford Cathedral just down the road from the Granada TV. Arthur looked a little bit like Paul Daniels, as I recall… there was an electric fire warming the studio and a Sheltie lying on a dog bed in the corner. Arthur specialised in photographing Variety acts and advertising copy for The Stage. His portfolio included Ken Dodd, Tom O’Connor, and International Cabaret Stars Margo and Trevor.

I told him what I did and what I needed. He’d never had a writer for a client before. He thought it over then gave me the lighting he used for magicians, which I rather liked the idea of. I liked the work he did, as well. Hey. I’ve not changed that much. Maybe I could get away with using this one….

Bernice Summerfield did my latest headshots. Seriously. Lisa Bowerman – aka Doctor Who’s Bernice Summerfield – is a talented portrait photographer, specialising in actors’ headshots. You’ll find numerous examples of her work in the Spotlight directory of performers. She works with traditional film negative and natural light, moving to digital for delivery.

Okay, so Pitt and Clooney have nothing to worry about. But I love the way she takes honest shots with no flattery or fakery. And technically she’s so good that you can zoom in to my eyeball at the highest resolution and see her with the camera reflected there.

STEPHEN GALLAGHER is a novelist, screenwriter, and director. He is the author of fourteen novels, including Nightmare, with Angel; Red, Red Robin; and The Spirit Box. His latest novel, The Bedlam Detectives, features unlikely detective Sebastian Becker and will be available wherever books are sold February 7, 2012. From dank asylums to the lush and treacherous Amazon, through the makeshift studios of the early film industry and a traveling fair of freaks and illusions, Sebastian Becker’s search for answers brings him face to face with madmen and monsters, both imagined and real. Confronting immense danger in his hunt for the truth, he will explore murder, tragedy, and the tempestuous depths of his own mind.

Visit Stephen online at StephenGallagher.com and on Twitter @brooligan. Get more insider takes on book, film, and TV on his blog at brooligan.blogspot.com.

RIFers! We’re giving away copies of The Bedlam Detective on Read It Forward Facebook – enter for a chance to win! 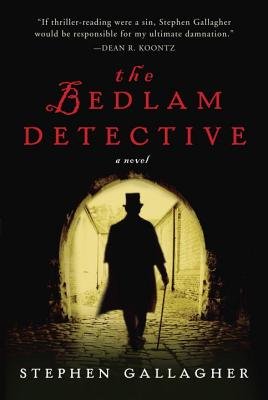