Recently I was interviewed for the Big Orange Slide, an online magazine for and by folks in the ad world. The interviewer, after reading my novel, asked me, “Could you mercy kill a dying animal like your novel’s protagonists do?”

This was an interesting question. It actually got me thinking about bravado. But not the swagger and heft of male courage—that defining quality (or lack thereof) that marks a man from cradle to grave. Instead my thoughts turned to the infinitely more interesting female bravado. Where does it come from? Who’s got it and how is it deployed?

When I asked women friends to recount their experiences with feminine boldness, the schoolyard brawl inevitably came to mind. That catty rite of passage from which one participant emerges clutching a tuft of her opponent’s hair. Others cited their days on the corporate scene and their lipsticked, neck scarved, Hilary-esque battles in the boardroom. One woman mentioned a recent episode involving the shameless use of elbows during the release of the new Jimmy Choo line for H&M.

Sorting through the stories it’s safe to say that at its most physical, female bravado is somewhat unexpected compared to its male counterpart and more likely to be exhibited under conditions of stress. Whereas male bravado, like the pheromone, is something that’s given off freely. In fact, during many periods in history female courage remained downright unnecessary; what decent woman in genteel society would be required to perform tremendous acts on her own?

Well, my novel New World Monkeys begins with an act of female bravado. Duncan and his wife Lily are driving upstate to their summer home. It’s close to midnight when a wild boar leaps from the bushes in front of their car. The collision leaves their front grille crumpled and leaves the bleeding, squealing wild boar beneath it, dying. It becomes clear to Lily that this animal must be euthanized. Preferably by a park ranger. But it’s close to midnight, their cell phone is dead and they are completely alone on the desolate country road. The only course of action left is to put the animal out of its misery themselves and so Lily hands her husband the tire iron.

Here, Duncan faces a horrible moment, one that will haunt him for the rest of the novel: He freezes. He does not take the tire iron. His male bravado abandons him. Later he will berate himself, knowing a real man would have slaughtered the boar, strapped it to the hood of the car and took it home to roast. But in fact, it is Lily who summons the necessary courage and brings the tire iron down on the back of the pig’s skull.

Could I mercy kill an animal? Before answering the interview question I decided I should first examine my own recent country experience—a week in an isolated farmhouse in upstate New York. To be continued….

• Book Groups: Download a reader’s guide and invite Nancy Mauro to chat with your book group about New World Monkeys

• Goodreads: Check out what other readers are saying about New World Monkeys

Note: no animals were harmed in the making of this video.
The “boar” is a lifelike stuffed animal (handmade by the multi-talented Nancy Mauro).

What do you think after reading Nancy Mauro’s take on female bravado and watching her provocative video? Share your thoughts in a comment below. 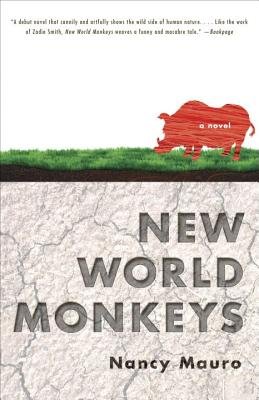