Matthew Gallaway on Opera and The Metropolis Case

This giveaway promotion expired on January 12, 2011.

In The Metropolis Case, an unlikely quartet is bound together across centuries and continents by the strange and spectacular history of Richard Wagner’s masterpiece opera Tristan and Isolde. Grandly operatic in scale, their story is one of music and magic, love and death, betrayal and fate. From the smoky music halls of 1860s Paris to the tumbling skyscrapers of twenty-first-century New York, Matthew Gallaway’s riveting debut is a tale of passion, music, and the human heart’s yearning for connection.

“It’s to the credit of Matthew Gallaway’s enchanting, often funny first novel that it doesn’t require a corresponding degree of obsession from readers, but may leave them similarly transported: the book is so well written – there’s hardly a lazy sentence here – and filled with such memorable lead and supporting players that it quickly absorbs you into its worlds.” ~The New York Times

Read It Forward sat down with Matthew and talked about The Metropolis Case. We asked him how he decided to write his sweeping novel.

About twelve years ago, I saw an opera called The Makropulous Case by the twentieth-century Czech composer Leos Janacek. While the opera is more satirical than dramatic, it contains themes related to mortality and music that I thought would be interesting to explore in a literary context. Not long after, I also attended a performance of Richard Wagner’s Tristan und Isolde, which is often described as the first piece of modern music because of its atonal qualities. (Concertgoers were said to have literally gone insane after the 1865 premiere in Munich, because the music was so shocking to their ears.)

As someone who grew up mostly listening to and playing dissonant rock, I was struck by the similarities between Wagner’s opera and some of the bands I loved, such as the Velvet Underground and My Bloody Valentine, and the idea that all of this music falls on a continuum.

To help readers get a sense of this idea, I’ve included music clips and videos on the website for The Metropolis Case for all of the music found in the book, from Tristan to Joni Mitchell to the Smiths. There are also photographs of most of the book’s settings and notes on the chapter titles.

I also keep a daily blog in which people can check out anything from the Vienna Staatsoper (designed by a “real-life” character in the book) to a lovely pair of matching antique napkin rings my partner had inscribed with the names of two of the book’s characters to celebrate its publication.

When I began writing The Metropolis Case, I wanted to create a structure that would incorporate operatic plot devices and motifs, while allowing the characters to go on journeys in which they confronted some of the ‘big-picture’ questions we all face (and which are also important in Tristan), such as the search for love and the meaning of life and death.

In addition, the more I researched 19th-century opera and found parallels between the great cities of old Europe and present ones such as New York, I wanted to draw out how these cities shape us as people and artists, and vice versa. (Hence the word “metropolis” in the title, because “the city” is to a large extent a character in the book.) In short, I wanted to compose a big, lavish opera, but in the form of a novel (because I didn’t have it in me to write an actual opera!).

I’m often asked if a reader needs to be an expert on opera to enjoy the book, and I always say that to the contrary, I want to help introduce opera to people – and especially music lovers, which I think includes just about everyone – who have never experienced it. While those who know opera will undoubtedly find clues in the unfolding story that others will miss, my hope is that everyone will find much to enjoy, in the same way people attend the same opera repeatedly despite knowing every twist and turn. Even if you’ve seen an opera a hundred times, a great performance can take you to new places, and I wrote The Metropolis Case with the hope that readers of all kinds will be similarly transported.

We want to share this great read with you! To enter for the chance to win a copy of The Metropolis Case, visit Matthew Gallaway’s website. Check out the music and photos he’s posted, read a blog post or two, and come back here to post a comment with your thoughts. We’re also interested to know if you have any favorite novels that feature opera or other music.

Limited quantities, while supplies last. Winners chosen at random and notified by email. One entry per person per book. No purchase necessary. 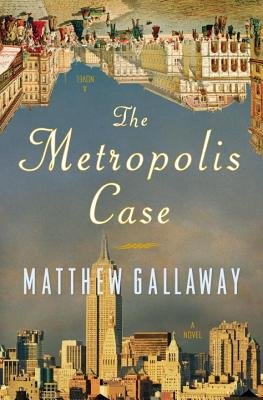