Matthew Gallaway on Multimedia and The Metropolis Case

When setting up a website for his debut novel, The Metropolis Case, author Matthew Gallaway sought to find more ways to bring his readers deeper into the book’s already absorbing narrative.

Rich with musical reference and vivid city imagery, Matthew’s novel is enhanced further by photos, supplementary notes, and a full soundtrack at MetropolisCase.com.

We caught up with Matthew to talk about his hopes for how the site would enhance his readers’ experience of The Metropolis Case.

Read It Forward: Many RIFers are fans of The Metropolis Case and have commented about what a unique experience it is listening to the music and enjoying the photographs you share on your website. What inspired you to create a multimedia experience for your readers?

Like many people I’ve met, I didn’t know much about opera until later in life, and to discover it was a way to fall in love with music again. I wanted to bring this excitement to The Metropolis Case, so that anyone who loves music – which I like to think is everyone! – might be similarly moved or at least intrigued. Also, because I grew up listening to rock – anything from the Velvet Underground to the Smiths to My Bloody Valentine – I was surprised to hear echoes of rock music in opera (and vice versa), so I also wanted to describe those bridges between the past and the present.

It’s sort of like how when you walk around New York or Paris, you get a sense of how things looked 100 years ago even as the city continues to change and evolve. Ideally, the website helps to fill out the experience of reading the novel, much the way liner notes on a record can bring you closer to the music. So far, I think it’s been working: I’ve heard from more than a few readers who even have been inspired to check out an opera, which has been a real bonus. To me, one of the great pleasures of reading is to find new worlds we can later explore on our own.”

MATTHEW GALLAWAY lives in Washington Heights, New York City with his partner Stephen and their three cats, Dante, Zephyr and Elektra. His debut novel, The Metropolis Case, is now available in paperback wherever books are sold. 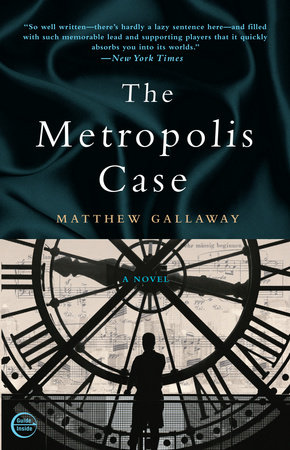