Kieran Shields on His New Mystery A Study in Revenge

“Does it have the same characters?” That’s usually the first question when I mention that my second book, A Study in Revenge, is coming out. The easy answer is yes, detectives Grey and Lean, and librarian Helen Prescott are back.

Recently someone asked another simple sounding question, “Why’d you write a sequel?” There’s no quick answer to that one. I have other ideas kicking around, some that I’ve started putting to paper already. So why a sequel?

Tackling that question seems appropriate at this time of year. We’re heading into that place on the calendar where we look forward to the New Year and the opportunity, real or imagined, to turn the page. Yet, it’s natural to look back over the experiences of the past twelve months as we get ready to move ahead.

I think my decision arises from the very same ground as those questions of whether the new book has the same characters. Both have to do with the nature of stories. At the heart of every mystery is the question: “What really happened?” But go beyond the mystery, look at the whole story and the real question is always: “Then what happens?”

From our youngest days of listening to stories, we always want to know that. We have an innate desire to learn what’s next, what’s behind that door, or inside that box, or out there in the dark.

Every book is a separate little journey that we take it because we want to see where it leads. But alongside that desire to discover something new is a competing force, the pull of the familiar, that urge to search for a familiar face in a crowd, even when you’re in a strange new place. As intriguing as it is to start down a new road, it can feel all the richer for knowing that you’ll see old friends along the way.

I suppose that’s the answer to why I wrote a sequel. I’d spent a lot of time with these characters in The Truth of All Things. I wasn’t ready to part company from them just yet. I wanted to know what happens next.

A Study in Revenge by Kieran Shields – Excerpt

KIERAN SHIELDS grew up in Portland, Maine. He graduated from Dartmouth College and the University of Maine School of Law. He continues to reside along the coast of Maine with his wife and two children. The Truth of All Things is available wherever books are sold. The sequel, A Study in Revenge, will be available on January 8, 2013.

Visit Kieran Shields online at KieranShieldsBooks.com and on Facebook and Goodreads.

RIFers, ENTER TO WIN! Now through December 28, 2012, you can enter to win a copy of A Study in Revenge on Read It Forward Facebook. Good luck, all! 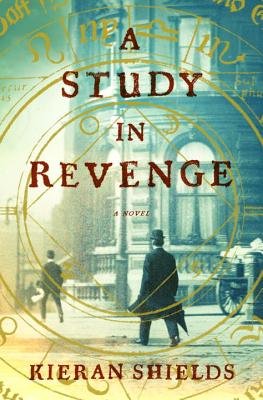