Katharine Weber on The Memory of All That

When I set out to write The Memory of All That: George Gershwin, Kay Swift, and My Family’s Legacy of Infidelities, although at the heart of the story lay my grandmother’s romance with George Gershwin and how it has affected my family over the decades, and how it has affected my own definitions of love and marriage, I thought I was going to write a book about family stories – how we tell them, and how we hear them, what they mean to us, how the narrative impulse functions in a family’s identity, and how all this influenced me as a novelist.

I thought I would write a book largely about writing, and I planned to illustrate my ideas with discussions of the images and incidents in certain family stories that I appropriated in certain ways in all five of my novels. The title of this book was going to be Symptoms of Fiction. But along the way, I wrote a completely different book.

Somehow, even with full awareness of the powerful impact of the actual telling stories I had in mind, I hadn’t quite focused on how moving and entertaining these stories were in themselves, and how their cumulative meaning could be developed, and how intriguing this cast of characters really was, and how what linked it all together was my sensibility and experience growing up with these people and these stories.

But the more I wrote, the more obvious it became to me that the stories themselves were the book. Why did I want to write around these stories and focus on the narrative impulse instead? It became evident, too, that the business of finding connections to my novels in the material of my experience and my family stories was something I should let my readers discern for themselves.

And so my task became, instead, developing the narrative identity for the book this was becoming, the story that has at its heart the complex love triangle that formed when George Gershwin occupied my grandmother’s heart, though she still loved Jimmy Warburg, her husband and the father of her three daughters, as well as her lyricist for the hit Broadway show they wrote together, five years into her romance with Gershwin. I needed to make it all fit together as a coherent narrative told in my own voice.

My wonderful editor, John Glusman, held my hand through three drafts of the manuscript, each time coaxing me toward a more genuine, reflective, and more intimate narrating voice – which at first I found much harder to control and work with than the invented personas and voices of all my fictional narrators.

But then it clicked, even as I stuck to the facts of the myriad characters and events I was writing about (a struggle for a novelist accustomed to imaginative detours), and I discovered that I could write THE MEMORY OF ALL THAT exactly the same way I write a novel, with a narrator who has to tell her story.

View photos from The Memory of All That by Katharine Weber.

Download an excerpt of Memory of All That by Katharine Weber.

Download the reader’s guide for Memory of All That by Katharine Weber.

RIFers! Enter to win a copy of Katharine Weber’s The Memory of All That. No purchase necessary. Limited quantities, while supplies last. Winners chosen at random. Open to U.S. residents over the age of 18. Giveaway offer ends July 15, 2011.</span 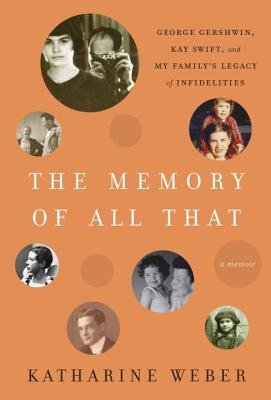