Geoffrey Gray on SKYJACK: The Hunt for D.B. Cooper

What bugged me the most traveling to all these places is sitting in the airplane and thinking he sat here in a seat like me, and he looked out over the cabin at the passengers in front and beside him, and instead of ordering a ginger ale and ice cubes he demanded a small fortune in cash and parachutes and jumped out of the plane, over the most remote land in this country, down with all the bears and cougars and Big Foot, never to be seen again.

Who was he? To know D.B. Cooper was such a man, and he had a name other than his alias Dan Cooper, and a family, maybe a sister or brother, a job, and a reason to commit the only unsolved hijacking in our time, and that I might have the ability to determine once and for all who he was became the ingredients for an obsession.

How else to explain the three days I spent in the basement of the Rutgers University library, flipping through year backs from postwar years ’46, ’47, ’48, and ’49, looking for faces on the track team that matched an FBI sketch that might not even look like Cooper himself? Or the miles of microfiche I scanned looking for clues that rogue CIA operators, with possible mob ties, hatched the scheme to improve airplane safety? Or opening an e-mail account in the Phillipines to communicate with alleged former mercenaries?

After a while, I stopped wondering who he was. I started wondering, who was I? Why did I feel the need to know Cooper’s real identity? It was like a sense of entitlement was driving me. I deserved the right to know who he was. Surely, the clues to uncovering Cooper, I thought, must be at the end of Google search somewhere. Or buried within hundreds of FBI files I had obtained to use on my hunt. So much accurate data and information is now at our fingertips it seemed inconceivable that this man could allude me, and yet I had no idea who he was.

At one point, I thought five maybe six people could be Dan Cooper. Each had his or her own claim and motive to the crime. I wasn’t curious anymore. I could not be certain of his name, but I felt I had known the man. (Or woman.) I undercovered the environment he lived in.

I had learned about the psychological forces at war inside hijackers, and why in the fall of 1971 the good guys began to root for the bad guys. I learned that without answers, there is only suspicion and paranoia and obsession. I learned to savor the unknown, to embrace the mystery of the mystery, AND THE MYSTERY IN FRONT OF ME ALL ALONG. I no longer had to know.

GEOFFREY GRAY writes about crime, politics, sports, travel and food. He is a contributing editor at New York Magazine, covered boxing for The New York Times and for programs like This American Life, writes for other newspapers and magazines, and once drove an ice-cream truck. SKYJACK is his first book. 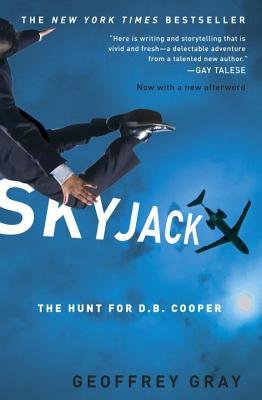