When Navy SEAL Adam Brown woke up on March 17, 2010, he didn’t know he would die that night in the Hindu Kush Mountains of Afghanistan – but he was ready.

In a letter to his children, not meant to be seen unless the worst happened, he wrote, “I’m not afraid of anything that might happen to me on this earth, because I know no matter what, nothing can take my spirit from me.”

Fearless is the story of a man of extremes, whose courage and determination was fueled by faith, family, and the love of a woman. It’s about a man who waged a war against his own worst impulses and persevered to reach the top tier of the US military.

Always the first to volunteer for the most dangerous assignments, Adam’s final act of bravery led to the ultimate sacrifice. Adam Brown was a devoted man who was an unlikely hero but a true warrior, described by all who knew him as fearless.

ERIC BLEHM is the best-selling author of The Only Thing Worth Dying For, which recounts the harrowing story of the first Special Forces A-team to infiltrate Taliban-held southern Afghanistan weeks after 9/11. It was a New York Times and Wall Street Journal bestseller. The author’s The Last Season, winner of the National Outdoor Book Award, was named by Outside magazine as one of the ten “greatest adventure biographies ever written.” Blehm lives in California with his wife and children. Fearless is available from WaterBrook Press wherever books are sold. Learn more at FearlessNavySeal.com.

Enter for the chance to win a copy of Eric Blehm’s Fearless on Read It Forward Facebook. 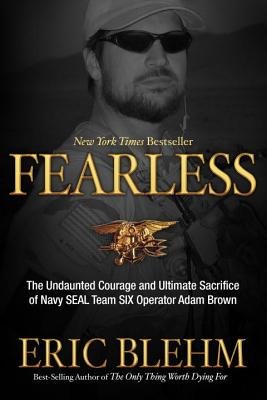