Half the fun of reading a truly great historical fiction novel comes from immersing yourself fully in the past. To truly transport their readers, authors must carefully research the place in history their characters inhabit. Before writing her engrossing novel of the Grey Sisters, Three Maids For A Crown, author Ella March Chase fully immersed herself in the culture of Tudor England.

Over the next month, Ella will be composing and posting a series of in-depth essays based on this research, exploring the characters and locations that are key to her novel.

“Sisters Against the Storm” is the inaugural essay in this series; check in with Ella March Chase on Facebook for the next essay, “The Bastard Queens: Mary and Elizabeth Tudor,” coming November 16, 2011.

Sisters Against the Storm
By Ella March Chase

Some claim the Tower of London is the most haunted place in England. I believe them. The ghost of Lady Jane Grey followed me home.  I was in college, fascinated by queens who died on Tower Green. As our tour guide spoke, I could imagine Jane, the reluctant Nine Days Queen trying to be brave as she faced the headsman.

Afterwards, I saw her image at the National Portrait Gallery – a full length painting reputedly done before Jane’s ambitious parents thrust the crown on her head.  Not even sixteen years old, Jane clutched a book, my own refuge centuries later. She peered into a dangerous world: Jane trying to do the right thing, afraid she would fail but trying not to show it. I cried for the girl who had died.

When I tucked my own daughter into bed years later, I thought how vulnerable Jane was, how brave as she faced her fate. The injustice sickened me – her parents and the other nobles who thrust Jane into power abandoning her as Queen Mary’s forces approached the Tower.

Jane’s child-like words to her father when told she was no longer Queen broke my heart. “Can I go home now?” Once Mary took the throne, Jane’s mother pleaded for and regained the family titles and property and Jane’s father’s life. She never mentioned Jane.  How was that possible?

Not until I researched The Virgin Queen’s Daughter did I discover Jane had sisters – Katherine, a beauty and ‘Crouchback’ Mary, a dwarf. Those sisters became Mary Tudor’s ladies-in-waiting and waited upon her throughout Jane’s imprisonment, trial and for years after Jane’s execution. After Queen Mary’s death, they served Elizabeth, who hated the Greys and eventually cast them into the Tower where Jane died.  Even so, both of the Grey sisters seized their own fate and risked love.  Had they learned from Jane how precious happiness was?

That glimpse into the hearts and minds, hopes and fears of women who lived through turbulent times is the gift historical fiction gives readers as we move through our own lives: A connection to people who refused to be crushed by circumstances beyond their control.  This bridge to the past and the lessons it teaches is an ongoing study for me – my addiction to researching the history, especially of women – continues to be one of my greatest passions.

It is that passion that has compelled me to write a series of three essays connected to Three Maids For A Crown, in which I will explore in more depth historical incidents connected to the Grey sisters. During the month of November one essay a week will be posted on my Ella March Chase Facebook page.

It is my hope that Three Maids For A Crown shows that, horrific as Lady Jane’s fate was, she wasn’t alone. She had sisters who loved her, missed her, cherished memories of her. She might never go home, but her sisters carried Jane with them as they faced their own trials, three sisters against the storm.

ELLA MARCH CHASE is the author of The Virgin Queen’s Daughter and Three Maids For A Crown . She lives in East Moline, IL.

November 16 – The Bastard Queens: Mary and Elizabeth Tudor
November 23 – Lady Jane Grey, Arsenic and the Bloody Axe behind the Wall
November 30 – Why would they do that? Or Secret Marriages during the Tudor Period 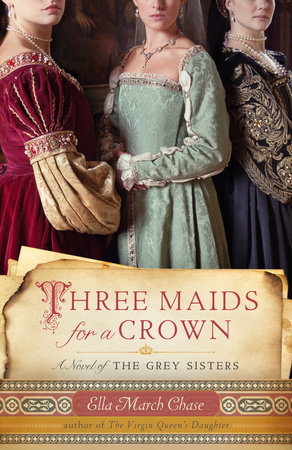