Bryan Batt, Sal from Mad Men, on Writing His “Momoir”

My dear friend Margaret who lost her home to Katrina only to have it burn to the ground a year after rebuilding told me when faced with such despair, she asked of herself, “What would Gayle Batt do?” A sense of calm came over her. She went and had her nails done and then tackled the beasts one by one.

My magical, charming, Steel Magnolia/Auntie Mame of a mom is the reason for this “momoir.” 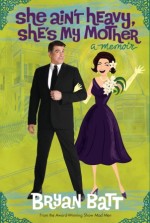 Having been an actor for almost all of my life has allowed me to tell many stories, primarily other people’s stories of life, love, and loss. A few years ago through complete and random chance, I started to tell my own. At a dinner party with Paul Rudnick, B.D. Wong, and others, a deluge of memories came flooding back to me after a cocktail-induced discussion of our respective childhoods. Tales of my wonderful mother and the parade of hoop skirts, child psychologists, and Mardi Gras floats – that thread through my somewhat twisted youth in New Orleans – came forth causing convulsive laughter. Most in attendance had met my mother and saw the pieces of the zany puzzle come together before their very eyes. In fact years prior, after meeting the lovely lilting Gayle Batt at a Theatre Wing luncheon at the glamorous Pierre Hotel, B.D had instantly nicknamed her “Sugar.” At the end of that fateful dinner party, Richie Jackson (producer of Nurse Jackie) informed me that if I didn’t write my stories, he would. There is nothing like the eminent threat of life story identity theft to ignite and inspire literary creativity.

So while bouncing from job to job on and off Broadway, I slowing began writing when I felt like it, or when the muse was particularly tickled by conversations and memories of all things mother. After a few months, I found myself wearing flame-throwing candles attached to my forearms playing “Lumiere” in Beauty and the Beast, sitting next to Beth Fowler, the original “Mrs. Potts” in the lavish Disney Broadway production. We quickly became close friends, mainly because she is probably the nicest and most “down to earth” Tony award nominee I’ve ever met, but also due to the fact that for a year and a half we were forced by the tight intricate backstage mechanics and limited space to be seated next to each other during nearly every off stage moment. Beth was the first professional friend I let read my work, and her loving encouragement and support drove me onward. However, life has a way of constantly throwing forth unforeseen road blocks, mile high hurdles, and the occasional TV series.

Not long after 9/11, after a string of substantial career disappointments, which to be honest had not plagued my life in many years, my partner Tom and I decided to open Hazelnut, a fine gift and home accessory shop on Magazine St. in New Orleans. Makes sense right? Take a break, relax, and bank your entire portfolio on a business you know nothing about. That is not completely true. I do have good taste and can decorate a room, but business sense is nowhere in my top 20 most-admired skill set. Thank goodness that Tom does have a flair for business as well as for the visually stunning. So then my life became bi-coastal, because the one sure way to ensure theatrical employment is to buy a non-refundable flight or open a highend gift shop in your home town which is soon to be devastated by a killer bitch of a hurricane complete with breeched levees and massive flooding.

Because of that storm, I actually turned down my first audition for Mad Men. When Katrina hit, Tom and I were in Sonoma and could not get back to New Orleans, and my mom’s flight out of New Orleans was of course also canceled. Needless to say, missy was having a hissy, and rightfully so. Ramsey, my then 25-year-old godchild and a nurse, boarded up our store, our shop, took our Mazda Tribute and drove mother (now in need of a hip and knee replacement) to safety in Texas. A trip which usually takes four to five hours was now tripled due to the mass exodus. I know there were great acts of heroism, but this young lady saved my home, my business, my car, and my mom…not necessarily in that order. To thank her we planned to take her to Paris for a week on her first journey abroad, only to receive a call from my agent informing me that my Mad Men audition was scheduled to fall right smack in the middle of the trip. Once again please note, that if you want an audition for a TV series, book a non-refundable international flight. For the first time in my professional career I chose life over work. Maybe it was fate, karma, good luck or divine intervention, but the role was not finalized until I walked through the casting office doors three weeks later. After that and to this day I am tri-coastal, enjoying the east River, the Mississippi ,and the Pacific Ocean, but mainly economy seats on Jet Blue, Delta, and United Airlines, as well as the lovely airports of the three aforementioned cities.

Only Gayle Batt could have prepared me for such a life. Let’s just say I am one of the lucky ones—I knew at an early age that I was loved unconditionally by an always coifed, perfumed, and gracious southern belle. Her loveliness was neither fake nor saccharine like that of many cartoonish impostors, but real and grounded, and she epitomizes grace under fire. She does not realize how kind she is, how good she is, how smart, strong, giving, or how achingly hysterical she will always be in my heart and mind. We’ve carried each other through the good and hard times in our lives together. When I’m down, hers is the voice I need to hear, and vice versa. She Ain’t Heavy, She’s My Mother is a tribute to the woman who taught me that there is great beauty in great strength, and although I’m still learning, she taught me to be a man.

Are you a Mad Men fan? Post a comment about your favorite Sal Romano moment to enter for the chance to win a copy of She Ain’t Heavy, She’s My Mother. Winners chosen at random. Limited quantities. No purchase necessary.