This is the motto of Anka Muhlstein’s erudite and witty book about the ways food and the art of the table feature in Honoré de Balzac’s The Human Comedy. Balzac uses them as a connecting thread in his novels, showing how food can evoke character, atmosphere, class, and social climbing more suggestively than money, appearances, and other more conventional trappings.

Full of surprises and insights, Balzac’s Omelette invites you to taste anew Balzac’s genius as a writer and his deep understanding of the human condition, its ambitions, its flaws, and its cravings.

Anka Muhlstein: It’s hard to imagine that there was a time when food was awful in France and restaurants did not exist in Paris, but prior to the late eighteenth century, this was the unhappy fact. One consequence of the French Revolution was that when the wealthy aristocrats fled, the chefs who had been in their employ were suddenly out of a job. They lost no time and opened the first Parisian restaurants.

My new book, Balzac’s Omelette, traces the ways in which food and the art of the table feature in Balzac’s writings.

Honoré de Balzac was born at just the right time, when restaurants were allowed to flourish in the capital. By the time he was writing his masterpieces, restaurants numbered in the thousands. Suddenly everybody discussed food. The best places to meet for dinner became a question of the utmost interest, and food became a popular subject. All sorts of restaurant guides appeared.

In my view, The Human Comedy is the best restaurant guide you could ask for, for the era. Balzac was a regular at some forty restaurants, and he sent his characters off into the most refined establishments, as well as into the lowliest ones. The result is both an ideal Michelin Guide of gastronomical delights (and disasters) in nineteenth-century Paris, and an enchanting introduction to the work of one of the greatest French novelists.

It will satisfy both food lovers and bookworms.

ANKA MUHLSTEINwas born in Paris in 1935. She has published biographies of Queen Victoria, James de Rothschild, Cavelier de La Salle, and Astolphe de Custine, a study on Catherine de Médicis, Marie de Médicis, and Anne of Austria, and a double biography, Elizabeth I and Mary Stuart. She is currently writing a volume on Proust as a reader. She has won two prizes from the Académie Française and the Goncourt Prize for Biography. She and her husband, Louis Begley, have written a book on Venice, Venice for Lovers. They live in New York. Balzac’s Omelette is published by Other Press and is available wherever books are sold. 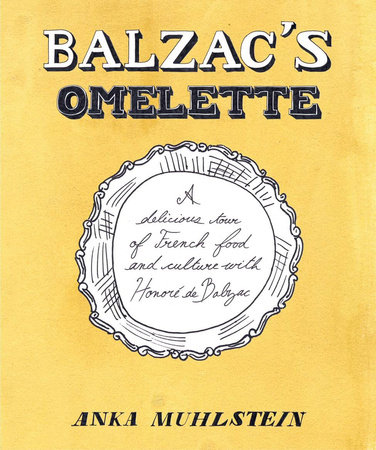