A Conversation with Abi Daré

The Girl with the Louding Voice author talks about the benefits of education, her daughters, and Michelle Obama.

By Abbe Wright • 9 months ago 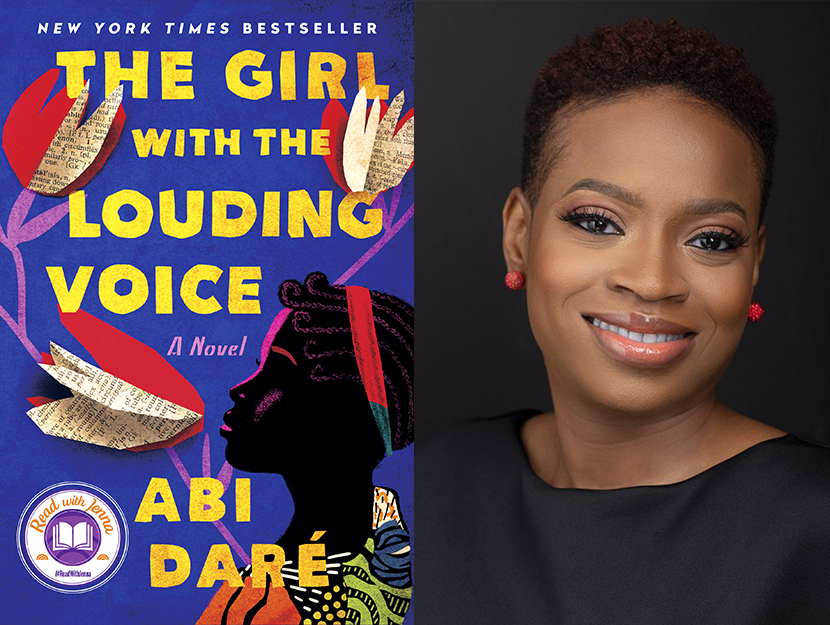 Abi Daré’s debut novel is the unforgettable, inspiring story of a teenage girl growing up in a rural Nigerian village who longs to get an education so that she can find her “louding voice” and speak up for herself. Read it Forward’s senior editor, Abbe Wright, spoke with Abi to learn more about the author’s personal inspiration behind her story. To get deeper into this incredible novel, check out the book club kit, here.

READ IT FORWARD: Abi, The Girl with the Louding Voice is your debut novel. Tell us a little bit about what the story is about.

Abi Daré: It’s really inspired by my childhood growing up in Lagos, Nigeria. We had lots of house maids, which were servants that work for families. Seeing all these young girls working for families was the norm. It wasn’t anything I thought about until I came over to the U.K. and had my daughters. I began to reflect on that aspect of my childhood because I was really struck by having an 8-year-old daughter at home and thinking that there could be a girl her age working for a family like mine. I thought I needed to write the story of this girl and what led her to the point of being a maid and how she would overcome the challenges.

My main character is Adunni, who’s a 14-year-old housemaid and a spirited young dreamer who wants everything the world has to offer, and she has to overcome loads of obstacles to get that. Her biggest want in life is to get an education, and the story’s her journey of trying to get that.

RIF: Education is obviously a huge aspect of this book. Can you explain why it was so important for you to include in your narrative?

AD: I was raised by my mother, and she had come out of a marriage with my father and was ultimately responsible for raising me and my brother. I saw how she used her education and the opportunities she had been given to raise us, and to give us the best education she could.

I remember her saying to me one day, everything can be taken from you, your health, your money, life sometimes, but if you’re alive and you have an education, that’s the only thing that no one can take from you. It was, for her, a way to invest in me, and I’ll get all the returns, as opposed to her getting those returns.

I took that on myself and decided that I would apply myself to get the best education I could. I’ve come to realize that it’s opened doors, and it has unlocked potential and opportunities.

Education allows me to think critically, to reflect on life, to have a lot of knowledge and skills and apply myself. There is a quote by Nelson Mandela that I absolutely love, and it says, “Education is the most powerful weapon you can use to change the world.” I think that’s what it is for me. It allows me to change my world in my own little way.

RIF: Tell us about the title of your novel. What is a louding voice, and why does our main character Adunni strive for one?

AD: The title comes from a conversation that Adunni has with her mother shortly before her mother passes away. Adunni’s mother calls her into a room and tells her story of the loss of a loved one that she suffered due to her lack of education. She also tells her about the loss of financial freedom, the loss of opportunities, the loss of her ability to be herself.

Adunni, who, at that time, hasn’t completed her education, thinks, Okay, if my schooling is my voice, then I just don’t want to have any kind of voice; I want a louding voice. For her, a louding voice is the refusal to accept what life throws at you. It is her way of saying, I’m going to fulfill my potential. I’m going to stand up and speak and be heard. I will have a lasting legacy, and I’m not going to let the fact that I’ve come from this poor village, the fact that I’m being limited by society and by life, the fact that I’m a young girl—I’m not going to let that stop me. I’m going to go out there and speak and be heard, and I will fight for everyone around me to be heard as well. That’s her louding voice.

My daughter is 10, and her sister is 5. I say to them that, where you can, you can change a little corner in the world by doing a lot of good. I try to instill in them the importance of discipline, of applying yourself and being persistent and consistent in getting the best things you can in life. And not stepping on anyone to do that, but just doing the best you can in your own way.

RIF: What research did you have to do to write this book? I mean, you, you talked a little bit about your personal experience, but there is a lot of detail in this book.

AD: Obviously, I drew on my childhood. We lived in a housing estate, so there were about a thousand families living where we lived, and it was kind of middle class to affluent. The housing estate was basically like a neighborhood—houses, mixed with schools and churches and supermarkets. So, I witnessed, as a 10-year-old child, seeing young girls working for families and trying to understand why, when I was going off to boarding school, they were staying behind. I wondered why these young girls, who were like me, were cooking and cleaning and washing and doing all the chores while I was maybe watching TV. I just didn’t understand it then, but I knew it was something that happened.
That was one part of the research that I didn’t have to pursue. It was subconscious research because when I came back to write the book, everything came pouring out.

I did a lot of speaking to friends who still live in Nigeria, what’s it like now? Does this still happen? I watched a lot of YouTube videos, witnessing some of the abuse that some of these girls suffered, which is really quite heartbreaking.
I also did a lot of reading of articles and, research on the law in Nigeria. I wondered, in terms of the treatment of these girls, what was legally allowed and what was not.

RIF: What do you think inspires Adunni to not only fight and stand up for herself, but for others around her?

AD: She’s a very spirited character. She’s fun. She is eternally hopeful. She believes in the good of others. She believes that she’s been helped by different people, and even though she’s had a lot of obstacles, she ultimately believes that there is some good in the world.

And she thinks that wherever you find yourself, there’s always someone worse off than you are. I think that knowledge, the fact that she’s been helped in every single aspect of her life helps her realize that she’s got to help others.
She also believes that a bad cycle needs to be broken. She thinks if she can do something, no matter how little is, to stop it, then she’s done a good job.

RIF: What do you hope readers take away from reading The Girl with the Louding Voice?

AD: I hope that they’re educated about the fact that things like this happen, but I really hope that they understand what this wonderful character of Adunni passes on—her infectious spirit, her resilience, her fight for her voice.
I hope that everyone reading the book realizes that wherever you are in life, you can always do better. You can always push forward and not let your obstacles put you down because here is someone who had nothing, and had everything taken from her, and she still does not give up.

In every single journey she takes through the book, she’s thinking, I’ve got to go on. I’ve got to do better. I’ve got to keep up. I’ve got to get what I want. She always has eyes on her goal, and she does everything she can to get it. I hope my readers learn from her and bring that energy into their own lives.

RIF: What are some books that you turn to over and over again for inspiration?

AD: One is Michelle Obama’s memoir, Becoming. This is a woman who’s come from a humble background and has, through determination, resilience, hard work, education, and pushing herself forward, navigated through that, ending up in the White House. Then she dealt with all the negativity and positivity that came with that role, ultimately becoming who is, a woman who is so inspirational and amazing. That book was life-changing for me. I loved it.

Another book that I really enjoyed because I think it told me that I could write about my home country and not feel guilty about it is a book called A Thousand Splendid Suns by Khaled Hosseini. It’s one book I keep reading and rereading because of the story of friendship, the power of women. I’m a strong believer in women helping women and seeing how the journey of the two women in that book came together and how it ended was very inspirational for me.

Plus, I feel a kinship with Khaled, who, like me, is an immigrant, and he’s come to live in the U.S. and wrote this story and showed sort of the struggles and the oppression of some of the women in his home country. I think that was very, very inspirational for me, and it was just a beautiful book.

RIF: Thank you so much Abi Daré, author of The Girl with the Louding Voice.