To celebrate Halloween, we asked some of our favorite authors to tell us what terrifies them. Here’s what Brian McGrory – author of the memoir Buddy – told us. (We’re surprised that Buddy didn’t make the list!) What terrifies you, RIFers? Leave a comment below!

1. Camping. No running water, no refrigerator, no way. I once stayed in a hotel without room service; it should never get any rougher than that.

2. Another Red Sox season like the once we just had. It robbed the franchise of its dignity and my native city of its autumn soul.

3. Another presidential election decided by the Supreme Court. This race has all the makings of another trip before the nine justices, and that won’t go well for the US.

4. Men who exercise in lycra workout shorts. Guys, c’mon, no. Please. No.

5. Forgetting all my passwords. Basically, all of life would seize up in a whir of alpha and numeric digits, upper and lower case, remembered wrong.

One more. Sharp knives. One quick misstep, a simple moment of distraction in the kitchen, and everything can forever change. 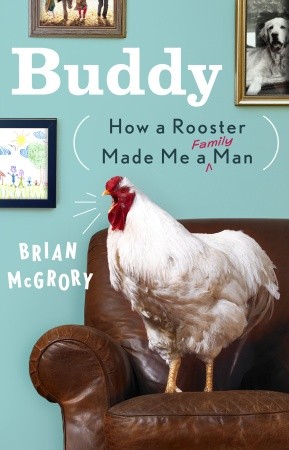 BRIAN McGRORY is a longtime newspaper reporter, editor, and columnist. Born and raised in and around Boston, he went to college at Bates College in Maine. He worked for the Patriot Ledger in Quincy, the New Haven Register in Connecticut, and has written for and edited the Boston Globe since 1989. He has a twice weekly column that appears on the front of the metro section, for which he has won the Scripps Howard journalism award, and is the author of four novels. He lives in Massachusetts with his entire family. Buddy will be available from Crown wherever books are sold November 13, 2012.