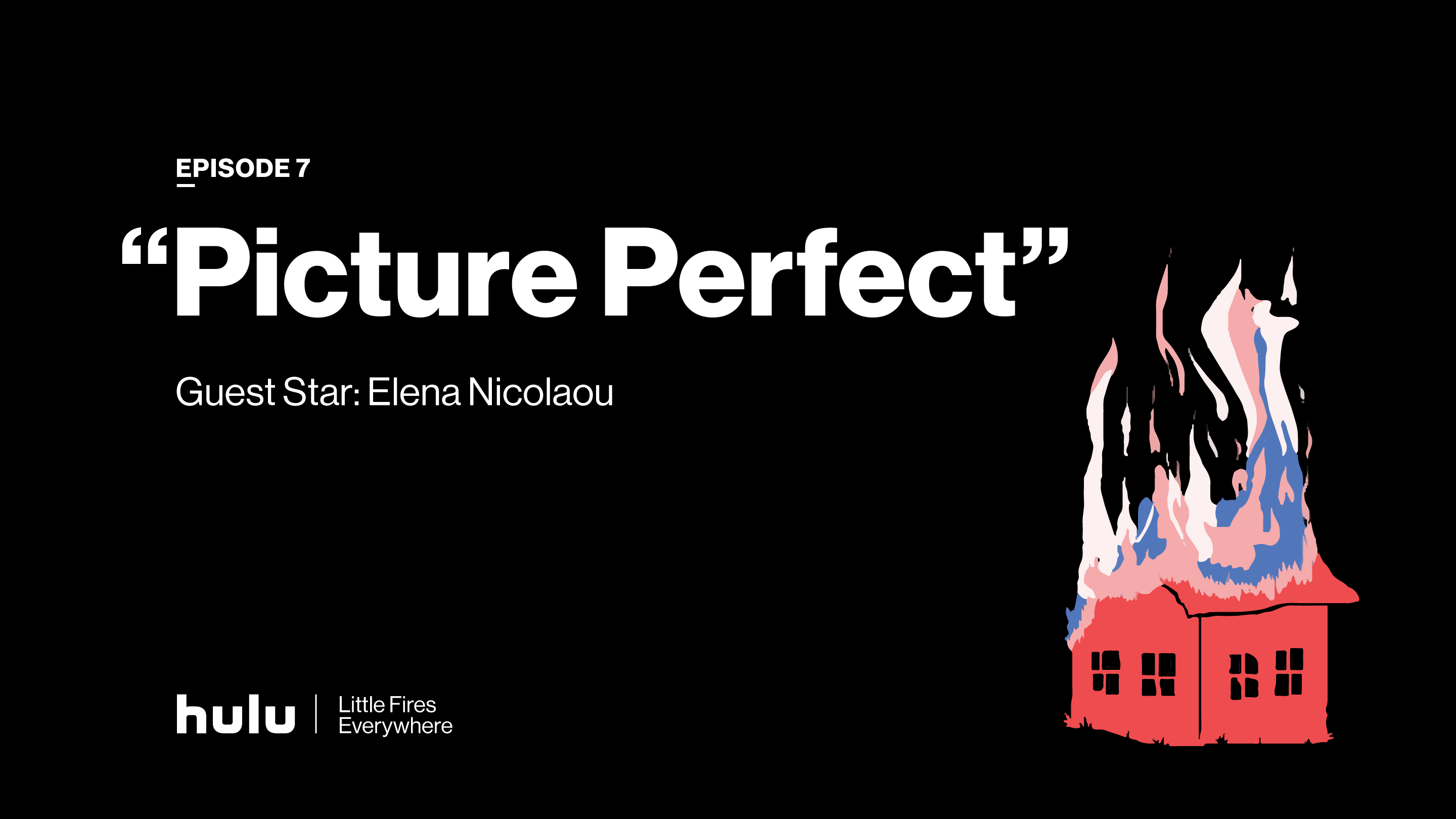 On this episode of The Adaptables, Abbe and Emma chat about episode seven of the Hulu adaptation of Celeste Ng’s bestselling novel, Little Fires Everywhere. They’re joined by Elena Nicolaou, Culture Editor at OprahMag.com.

"I just want Mia Warren to yell at me because she always says such really smart things when she's stern. I want her to sort out my life." —Elena Nicoloau

-Emma’s Fire Count (1:13–2:32)
-Emma recaps the episode (2:40–6:19)
-Elena chats with Emma and Abbe about her relationship to the book (6:20–7:22)
-Izzy’s sexuality storyline and backstory: “it’s the ’90s,” revelation that April and Izzy were girlfriends, analysis of April as a character and their relationship (7:23–11:14)
-Hypocritical actions and motivations of the characters in this episode, and the season so far (11:15–12:01)
– Richardson family tree lighting, trial prep, and Christmas card photo shoot. What are Elena’s motivations in this episode, particularly her obsession with helping people, or being seen as a helper. Is this the root of her conflict with Mia? (12:02–14:49)
-*AD* Latina to Latina (14:50–15:34)
– Elena’s confrontation of Mia in the courthouse bathroom, with a quick detour for Emma to flip out over courtroom procedure (15:35–18:01)
– Izzy as Elena’s foil (18:01–18:29)
-Celeste Ng on the complicated reality of adoptions “Every adoption starts with a loss.” (18:30–19:47)
-Lexie and Pearl’s journeys to grow up without becoming their mothers: especially Lexie dealing with her guilt over what she did to Pearl, both to get into Yale and at the abortion clinic, plus her break up with Brian, and Lexie’s vocalization of the pressure to be perfect (19:48–22:40)
-Courtroom scenes: Bill as an attorney and his mind for strategy, plus the thematic impact of Bebe and Mia’s testimonies (22:42–27:28)
-Detective Bill solves the case of the suspicious dinner receipt and has to confront Elena’s behavior with Jamie 15 years ago and when she went to NYC (27:30–28:15)
-Plot machinations abound: Trip reveals to Pearl that Mia is paying for Bebe’s lawyer, one of many things that start to make the two of them rethink their relationship. Meanwhile, Mia tries to back out of testifying after being threatened by Elena. Pearl and Mia have a huge blowup and Mia fails to reveal her and Pearl’s past to Pearl (28:27–29:48)
-How courage, and its failure, guide the characters in this episode. Particularly, Mia in relation to her testimony and her need to tell Pearl about their past, April and her inability to be her authentic self at school, and Pearl and Trip failing to tell Moody about their relationship. “Why do any of us keep secrets? It’s because we’re scared or we feel bad.” (29:49–32:05)
-We finally get the backstory of the toy horses that we’ve seen Pearl with, and write about, all season (32:05–32:23)
-Izzy’s Babies For Sale art protest project at school, and its racial and class implications, along with Mia’s firm but loving explanation of how Izzy’s own privilege needs to be acknowledged in her art, “you don’t get to be the exception to the rule just because you want to be.” Plus Mia tells Izzy she was once in love with a women and gives Izzy a pep talk about perseverance. (32:27–35:27)
-Trip and Pearl hook up Moody’s hideaway (uncool) and decide to tell Moody they’re together (cool), but then Moody sees them anyway and Trip then chickens out of telling him (uncool again) (35:28–36:26)
-Elena takes her final step to the dark side and reveals Pearl’s origin story to her. (36:27–36:53)
-Favorite ‘90s moments: Borders Books, AIM screennames, Garbage, Collective Soul, and Tupac on the soundtrack, Tower Records, and a surprise sidebar about minimum wage practices in America, and  (36:54–39:12)
-Question for the group: is the book arsonist going to be the show arsonist? (39:12–42:02)

– Flashback to last summer, reveals April and Izzy’s history (they got caught kissing during seven minutes in heaven at a party and April threw Izzy under the bus)
– Lexie finds out she got into Yale
– Elena and Izzy fight about Izzy’s attire for the Richardson family Christmas card
– Elena and Izzy fight about Izzy’s cabbage patch kid art project, for which she is suspended and Elena tells Izzy that it’s “hard to be your mom.”
– Elena cuts Izzy (who is flipping the bird) out of all of the Christmas cards and Izzy finds the photos of herself in the trash
– The cracks start to show in Bill and Elena’s marriage
– The disputed adoption trial for May Ling begins. Bebe and Mia both testify, despite Elena threatening Mia with exposure if Mia takes the stand
– Brian and Lexie break up.
– Trip and Pearl decide to tell Moody about their relationship, but fail to do so, and Moody finds out anyway.
– Pearl and Mia have a fight when Pearl learns that Mia is paying Bebe’s attorney fees
– Elena tells Pearl about her past, her father, etc.

1. 🔥 Mia sitting in front of her fire at the duplex, looking at keepsake photographs
2. 🔥 Elena reveals Pearl’s history to her, in front of a roaring fire at the Richardson house
3. 🔥 Bill is back on the cigarettes and he’s pissed about Jamie and Elena!

NEXT UP: We’ll release Abbe’s full-length interview with Celeste Ng and recap episode 8, the finale!